We've all seen it: That colourful human body, staring blankly ahead in the doctor's office, its stomach skin missing and guts exposed. But have you ever really stepped back and wondered what it took to perfect that anatomical diagram?

Long story short, it took centuries of study—and plenty of mistakes, most of which have been lost in the sands of time. But London's Wellcome Library just released over 100,000 images from its archive—which focuses on medical and social history—that offer a unique lens through which we can gaze back at the early days of medicine.

The study of anatomy goes as far back as 1,600 BC, when the so-called Edwin Smith Surgical Papyrus is believed to have been written. Thought to have been a military surgery manual, this treatise covers 48 different types of trauma and includes drawings of each. Similar documents came from other ancient cultures—like the Greeks and Romans, who gave us Galen, the preeminent anatomist of the 2nd century. Galen's claim to fame was that he compiled the most comprehensive anatomical charts of his day—but he did so by studying pigs and apes, not humans.

Some of the earliest recognisable anatomical images came from none other than Leonardo da Vinci, who produced some 750 such works. His unique talent not only for drawing anatomy but also studying it yielded a number of breakthroughs. Da Vinci, for instance, was the first person to produce an accurate depiction of the human spine, and also made significant progress in our understanding of how the heart works.

But Da Vinci was an anomaly. Others studying the human body in these early years made wild assumptions and guesses about the systems and organs that lay within—and many of these mistakes are documented in Wellcome's collection. This image of "Astrological Man" dates from between 1461 and 1481 and shows various astrological parts superimposed on the parts of the body they were thought to control: 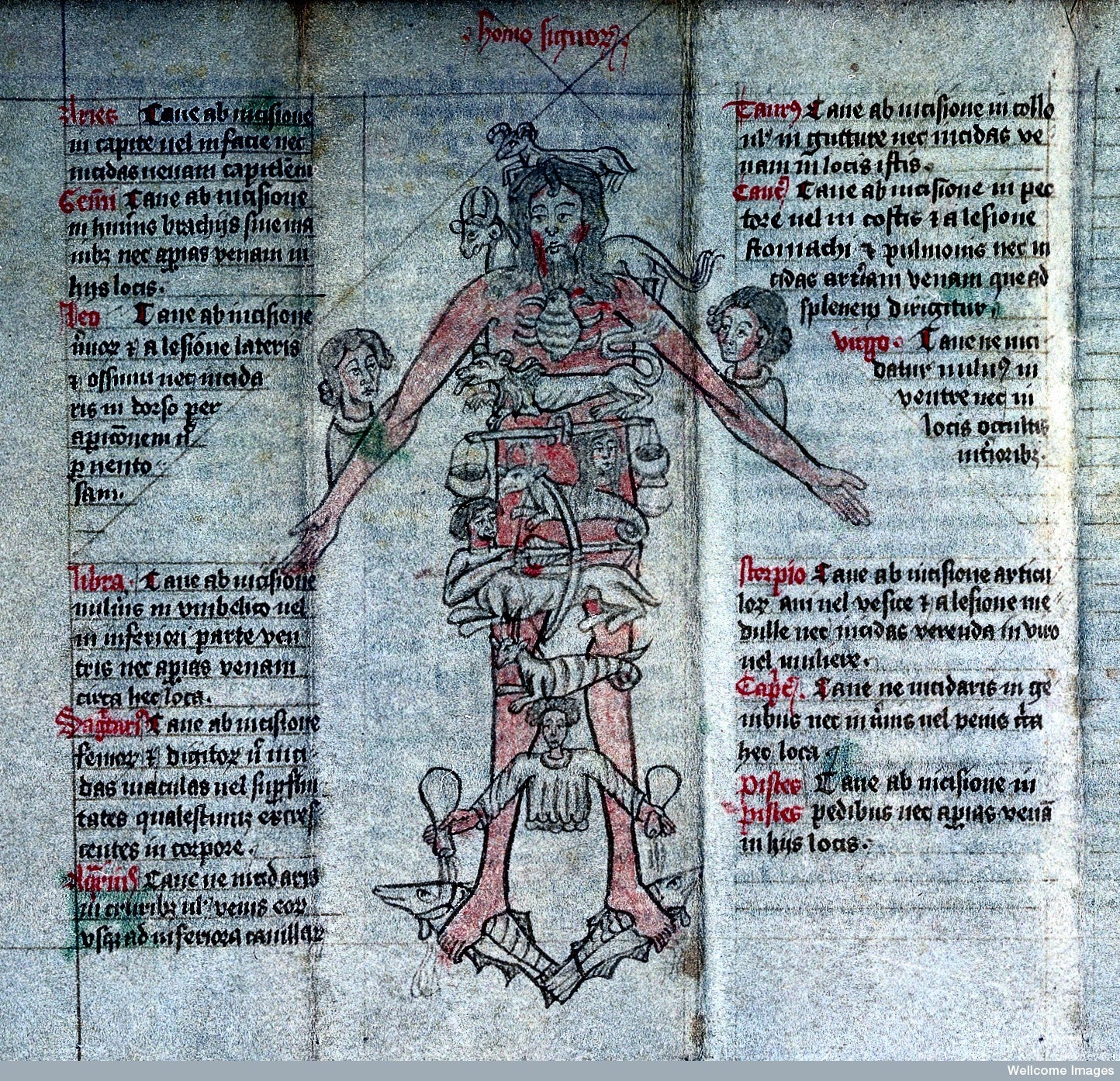 Some of the other images in the collection from that time period show the continued interest in anatomy from a military point of view. This image, from between 1420 and 1430, portrays the many ways in which you can wound a man, along with descriptions written in German. Note the poor understanding of internal organs: 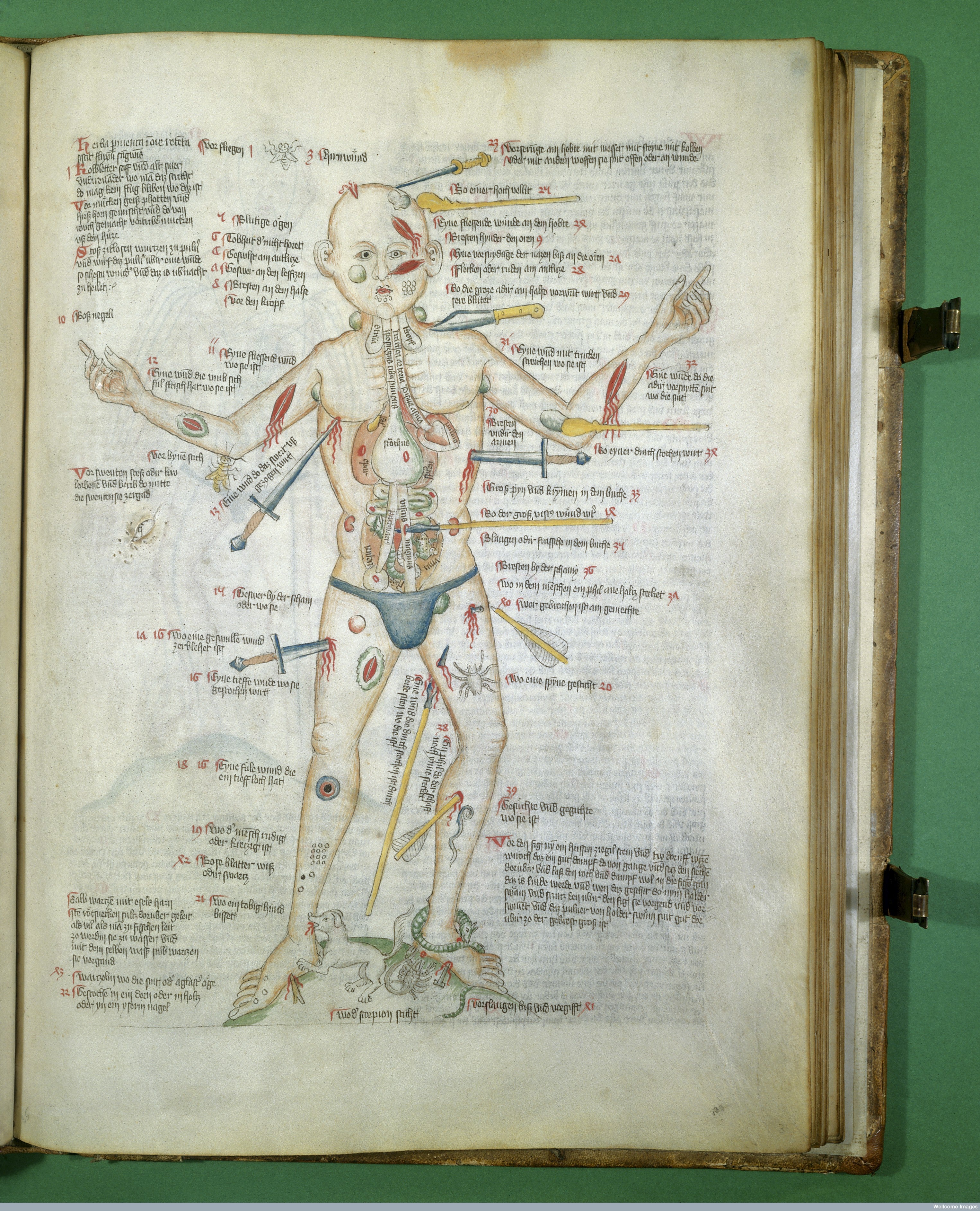 Again, this was a popular way to look at how the human body worked. Check out this similar drawing with English descriptions, all modeled after Galen's work. Again, there's not a lot of detail about the internal organs. And the heart is not really shaped like a heart, either. 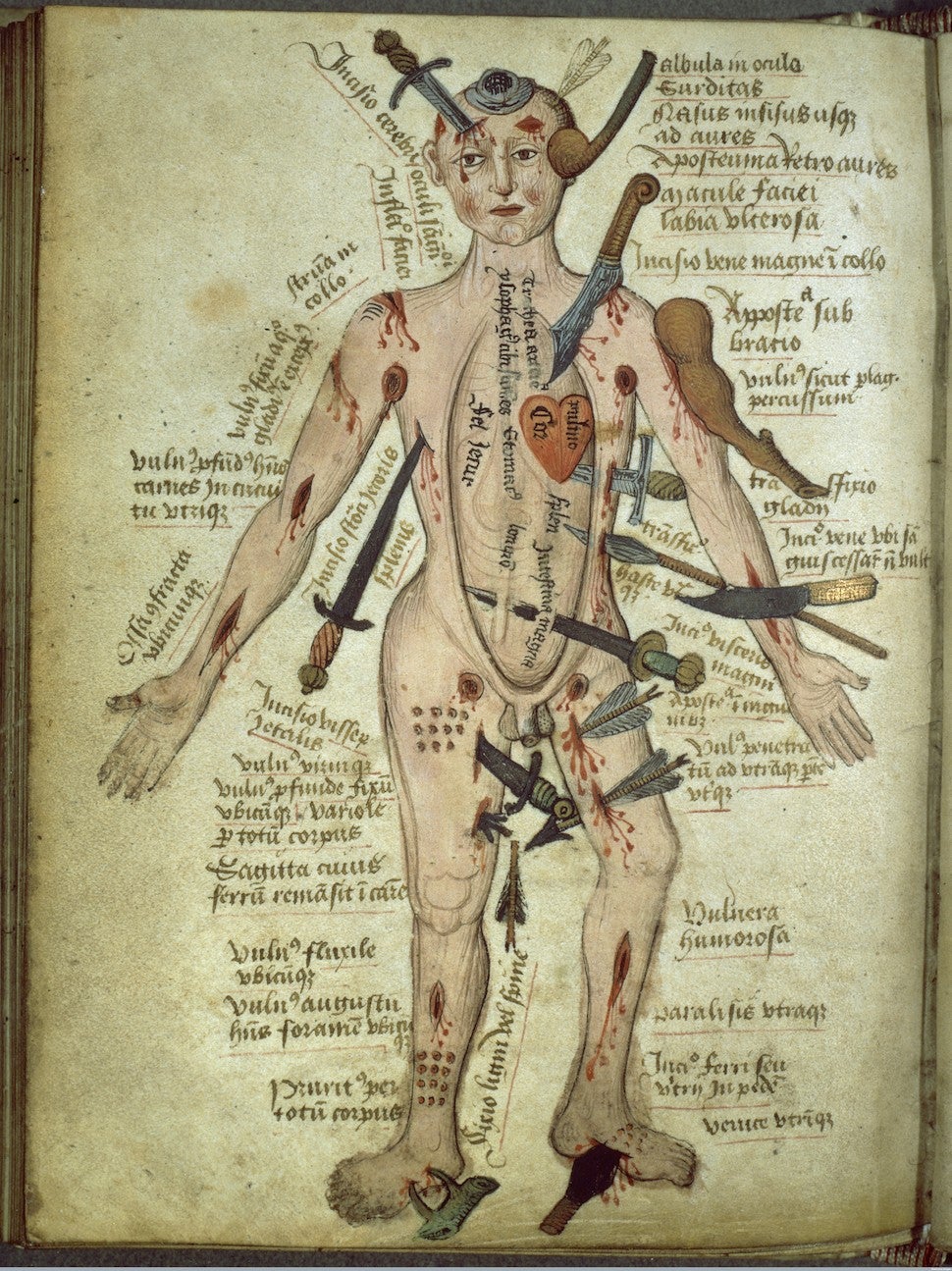 Things get better as we near the Renaissance and Industrial Revolution. Modern day anatomy really gets going by the 16th century, when dissections of human cadavers happened on a more regular basis. It was during this period of medical history that we learned more about how the circulatory system worked, and also discovered the lymphatic system as a discrete network.

The 17th and 18th centuries are now known as a golden era of sorts for anatomy. This is the time when anatomical theatres were in vogue, and certified anatomists would travel from city to city, dissecting fresh cadavers as they were made available. You could even get anatomical souvenirs—as evidenced in this ivory female anatomical figure. The top part of the torso could be removed to reveal the lungs and intestines: 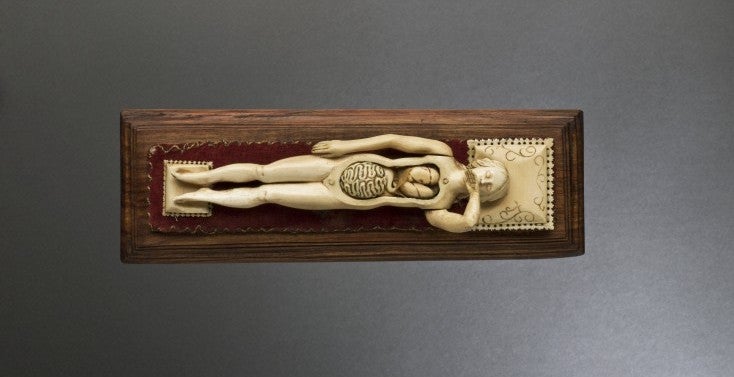 And of course, drawings got better as the field of study became more popular. These anatomical fugitive sheets from 1573 showed layers of internal organs that you could explore by lifting back the sheets, along with detailed labels: 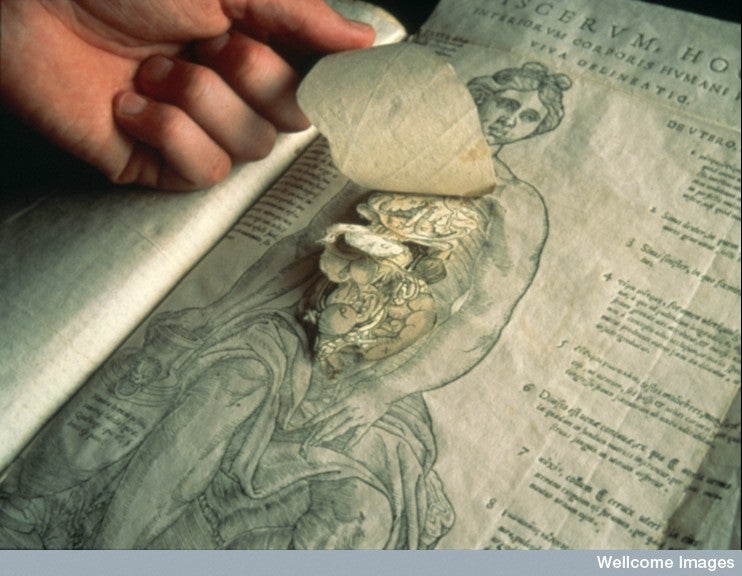 Not all of the drawings during the Renaissance made such easy sense. This illustration from The Work of Tobias (1707) compares the body's anatomy to the architecture of a house. Without being able to read Hebrew, it's hard to tell exactly what the analogies it's drawing are, but bowels as basement seems pretty astute. 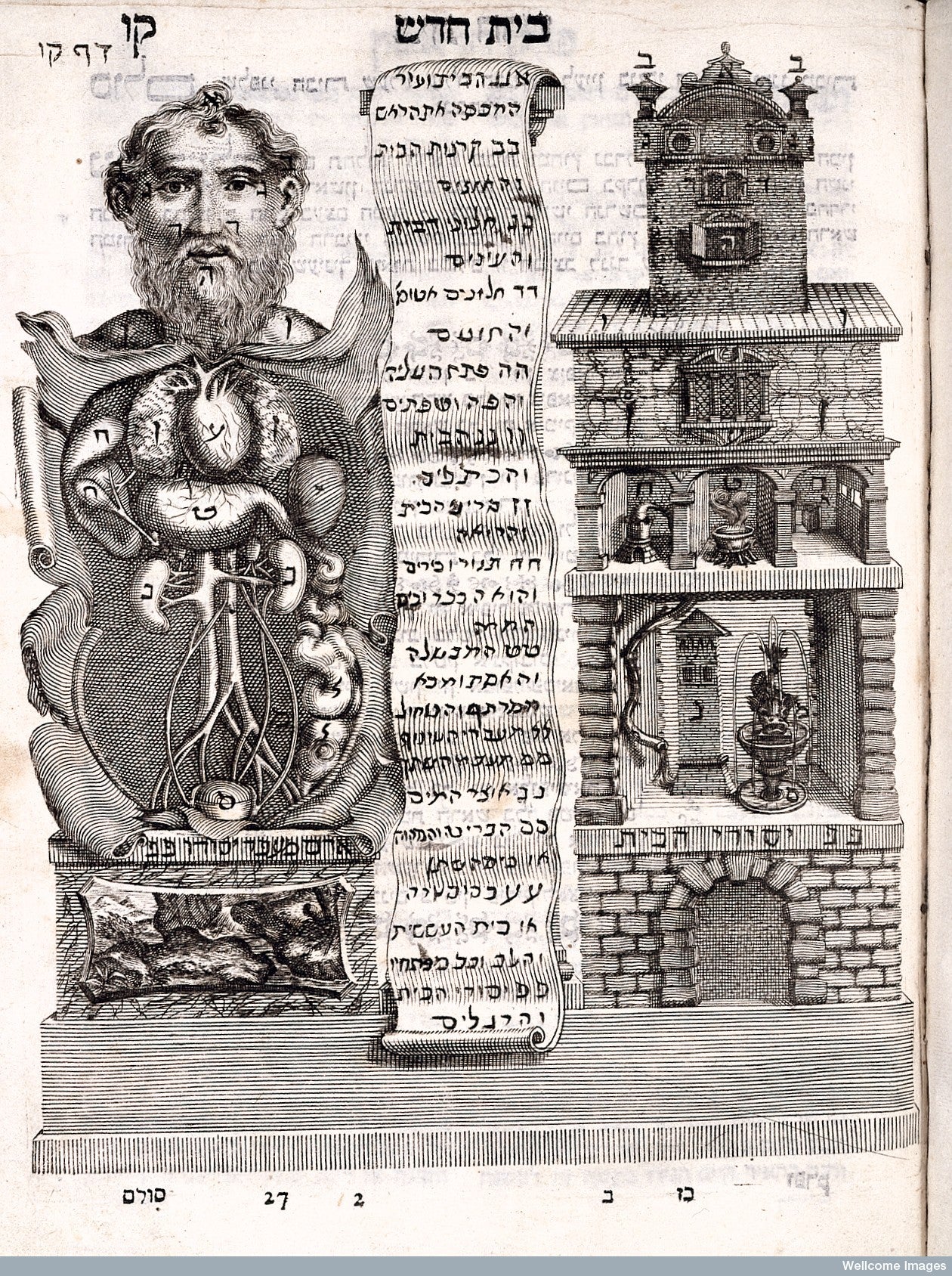 By the time we get to the 19th century, anatomical drawings start to look very familiar. By now, anatomists had figured out the basic details of the human body in pretty concise detail, and were able to render it as such in illustrations. Paolo Mascagni included this hand-coloured palette of the vascular system is his Anatomica Universa from 1923-1833:

Just a couple of decades later came the first edition of the now-famous textbook by Henry Gray, Gray's Anatomy, which included countless detailed drawings. It remains the standard anatomy textbook to this day: 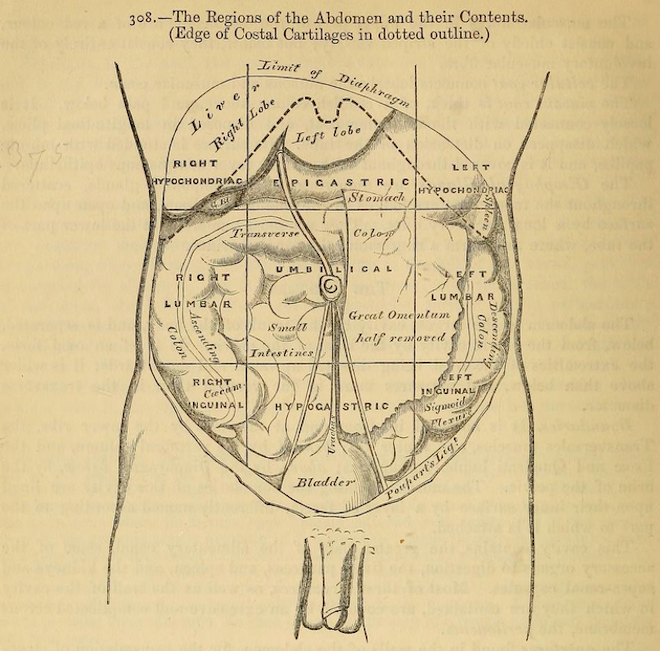 As for those colourful pictures in the doctor's office, you can thank Max Brödel, the godfather of modern medical illustrations. Thanks to Brödel's teaching in the early part of the 20th century, medical illustration is a proper profession. The human body never looked so precise. 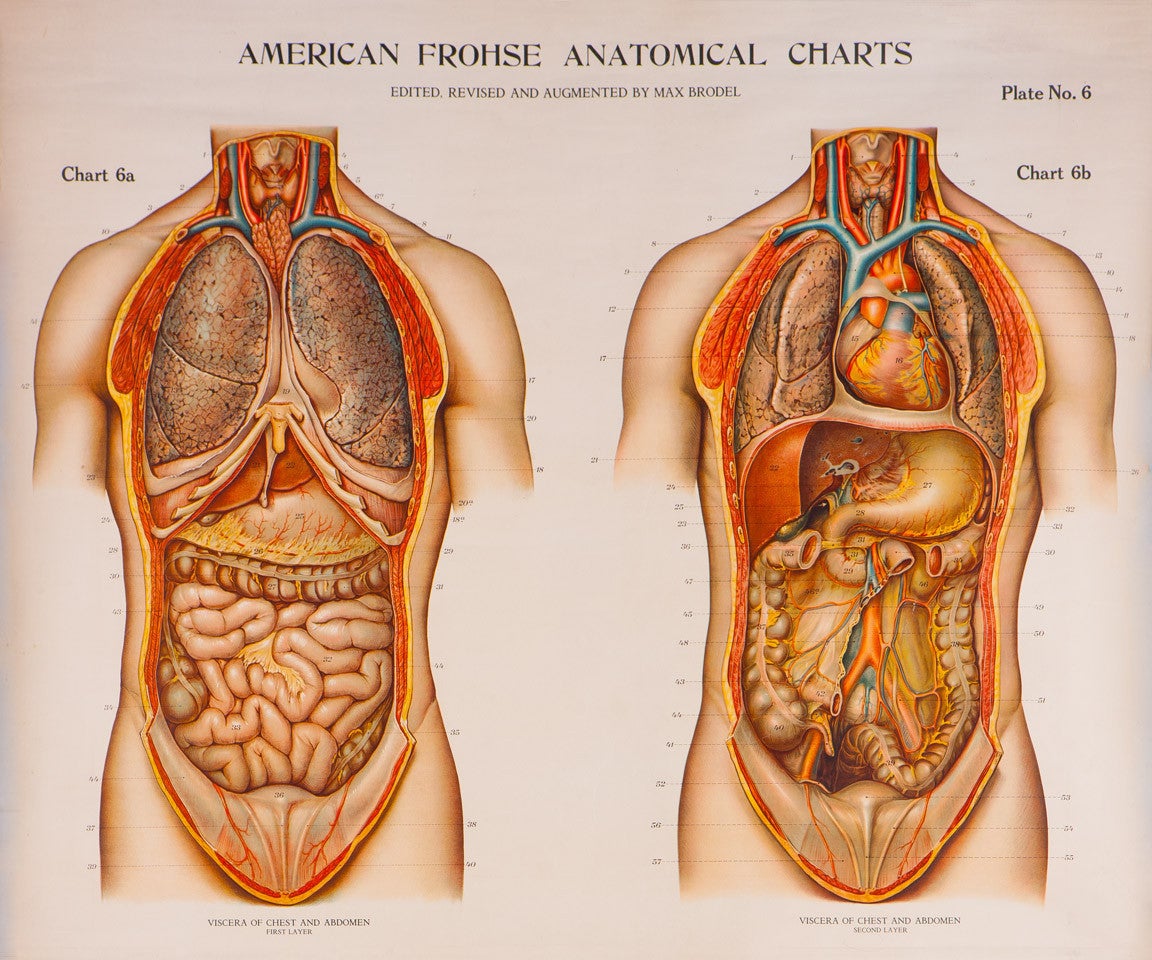 Do you have a favorite that we missed? Drop it in the comments below—and check out Wellcome's entire website here.