The Science Behind Why Fat Tastes So Good

It's the end of January, and that means New Year's resolutions swearing off chocolate and chips and all the other delicious fatty foods are just starting to bend. Who can blame you, really? Here's a rundown on the science of fat, and why it's so hard to resist.

It Feels and (Sounds!) Good in Your Mouth

Taste and smell get all the glory when we talk about food, but give some credit to your other senses, too. Fat has the ability to create unique textures—crispy or creamy—that appeal to our many senses.

Let's start with crispiness. When food is dropped into a vat of frying oil—which is far hotter than water's boiling point of 212 degrees F—rapidly expanding steam creates crispy bubbles that give chips and fried chicken skin their satisfying crunch.

It's pleasing to bite down into and, interestingly, it's pleasing to listen, too. According to this bit of Nobel-prize winning research, participants biting into Pringles rated the potato snacks as fresher when they simultaneously heard a crunch sound through headphones.

When it comes to cheesecake, mayonnaise, chocolate, and other creamy foods, "mouthfeel" is the operative word. Human tasters working for food companies report on the sensation of fat by rubbing their tongue against the roof of their mouths. Alternatively, a machine called a tribometer, sometimes made with a pig's tongue, makes quantitative measurements of mouthfeel. In an intriguing twist, scientists have also used microphones to study what rubbing a tongue against the roof of the mouth sounds like. Coffee with cream, for example, sounds smoother than black coffee. While mouthfeel is a tactile, "acoustic tribology" can help food scientists quantity exactly how fat feels.

It Makes Other Flavours Taste Better

The nuttiness of almonds, the chocolate-ness of candy—these flavours all come from volatile compounds in the food. Fat affects how volatile compounds are released in our mouths and, ultimately, how the flavour gets perceived. In a study of how flavour is released in low-fat versus high-fat ice cream, food scientists found fat could have different effects depending on the flavour. Cherry, for example, becomes more intense with less fat, but vanilla is the opposite.

Food also changes from when it first hits your tongue to the aftertaste, and it's fat that helps create the familiar flavour profile. Some flavours like to stick to fat molecules, so fat prolongs the release of those flavours in our mouths. Food scientists are, of course, hard at work on solving this problem in low-fat foods. One proposed solution is changing the structure of fat—encapsulating it in a gel, for instance—to slow fat-mediated flavour release. 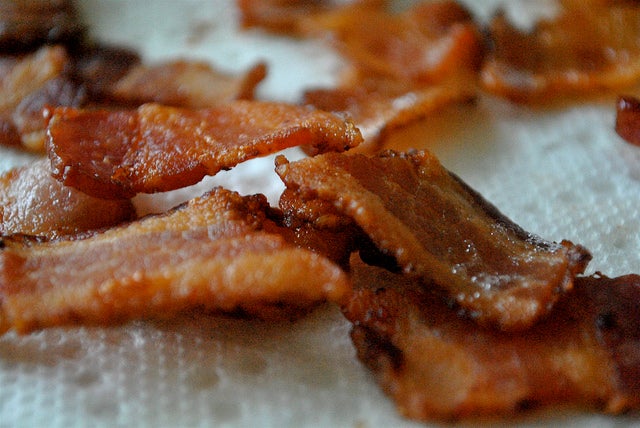 You Have Fat "Taste" Receptors

You've heard about the four basic tastes—maybe five including umami—but molecular biologists now think humans could have as many as 20 receptors for "tastes" like calcium, carbonation, and, of course, fat. At first, a study in mice found that those lacking a protein called CD36 weren't as interested in gobbling up fatty foods. Scientists then followed up the finding in humans, only to discover that people whose bodies produced more CD36 were more sensitive to picking up tiny amounts of oil.

Ultimately, what this science all amounts to is an explanation of why making a low-fat substitute is so hard. A fat substitute that doesn't sacrifice flavour has been the holy grail of the food industry for decades, with many failures like along the way.

The perception of fat is known as cross modal, which means it involves several senses working together. Fooling one sense might be doable; go put on some headphones with the sound of crunching Pringles. But fooling them all? Your brain is too smart for that.[Edible Geography—Psychology Today—Washington Post]