Even though they cover two-third's of the planet's surface, we know precious little about how the oceans actually interact with the continents and atmosphere. What's more, our oceanic models are woefully incomplete—only capable of showing large areas with reduced resolution or in high detail over a limited area. But a new fleet of autonomous research submarines are about to rectify that problem. 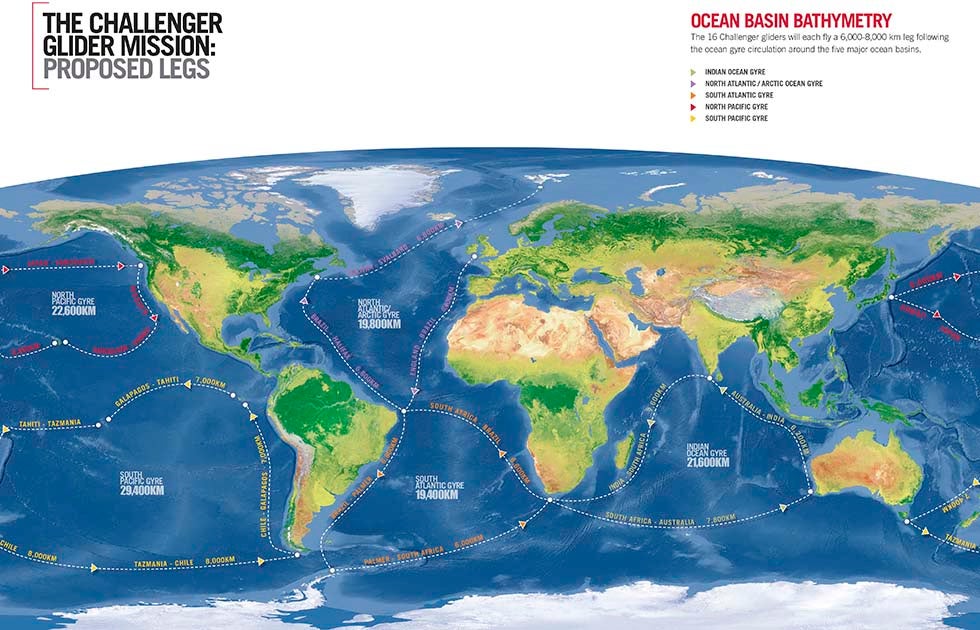 "The health of our oceans is truly an indicator of the health of our planet," David Wigglesworth, vice president and general manager of Iridium, said in a press release "The Challenger Glider Mission will provide the kind of high-resolution data desperately needed by researchers to evaluate and assess the current ocean state."

These 16 gliders were built as part of Rutgers University's Challenger mission to explore and quantify deep ocean currents and provide researchers a means of testing existing oceanic models for accuracy against the collected data. Each UUV (unmanned underwater vehicle) measures just over two metres long and utilises buoyancy changes within the water column to propel it along at speeds of 33 km per day. That's pretty slow, even by conventional seafaring standards, but over the course of the next two years, these gliders are expected to cover a total of 128,000 square kilometres (nearly 80,000 square miles) throughout five ocean basins—each one covering 6,000 to 8,000 km individually.

These gliders will travel along the fronts of deep ocean currents (which actually behave very much like storm front on land), using a suite of altitude, depth, GPS sensors to navigate from way-point to way-point within their respective survey areas while sampling ocean currents, water temperature, salinity, and phytoplankton levels in real-time. This data that is then transmitted back to control stations around the world via a satellite uplink each time the gliders surface.

"The technology underpinnings of this mission are truly enabling our researchers to gather more and better data than ever before, enhancing the basis of knowledge for future generations," Scott Glenn, Co-leader of the Challenger Glider Mission and Professor of Physical Oceanography at Rutgers University, said in a press release. "Part of our goal with this mission is to increase global ocean literacy. This expanded dataset will enable students and researchers to focus on the science of their local waters, as well as be a part of a global research community, all working toward understanding the ocean's role in regulating the changing climate and weather."

This data is expected to help researchers improve the accuracy weather forecasts and help fine tune climate change models while providing an unprecedented look at the mechanisms of the deep ocean. The gliders will be launching later this month from the Oceanology International Conference in London on their two year mission, returning in March 2016—on the 140th anniversary of the original HMS Challenger's return. [Rutgers University via Telegraph]