Garmin Vivofit Review: Some Good Ideas But Not Quite There

In the ever-expanding pantheon of wearable fitness trackers, Garmin is looking for an open seat, ideally at the Cool Kids' Table (CKT). Garmin makes some of the best GPS sports watches out there, so expectations were high for the company's first tracker. While it adds a nice trick or two, the holes are just too many.

The Vivofit is an activity tracker in the form of a wrist-worn band, like the Nike Fuelband, Jawbone Up, or Fitbit Force. It counts your steps, monitors your active time, and tracks your sleep.

Why Does It Matter?

It matters because there are a lot of Garmin loyalists out there, and the Vivofit integrates into the company's existing online platform, so you can track all of your athletic pursuits from a single page (assuming you also use the company's watches, I guess). It's also one of the first that has the ability to pair with an ANT+ heart rate monitor (sold separately), which should give you a better picture of what's happening during your workouts. And, lastly, it matters because you don't need to worry about charging it. 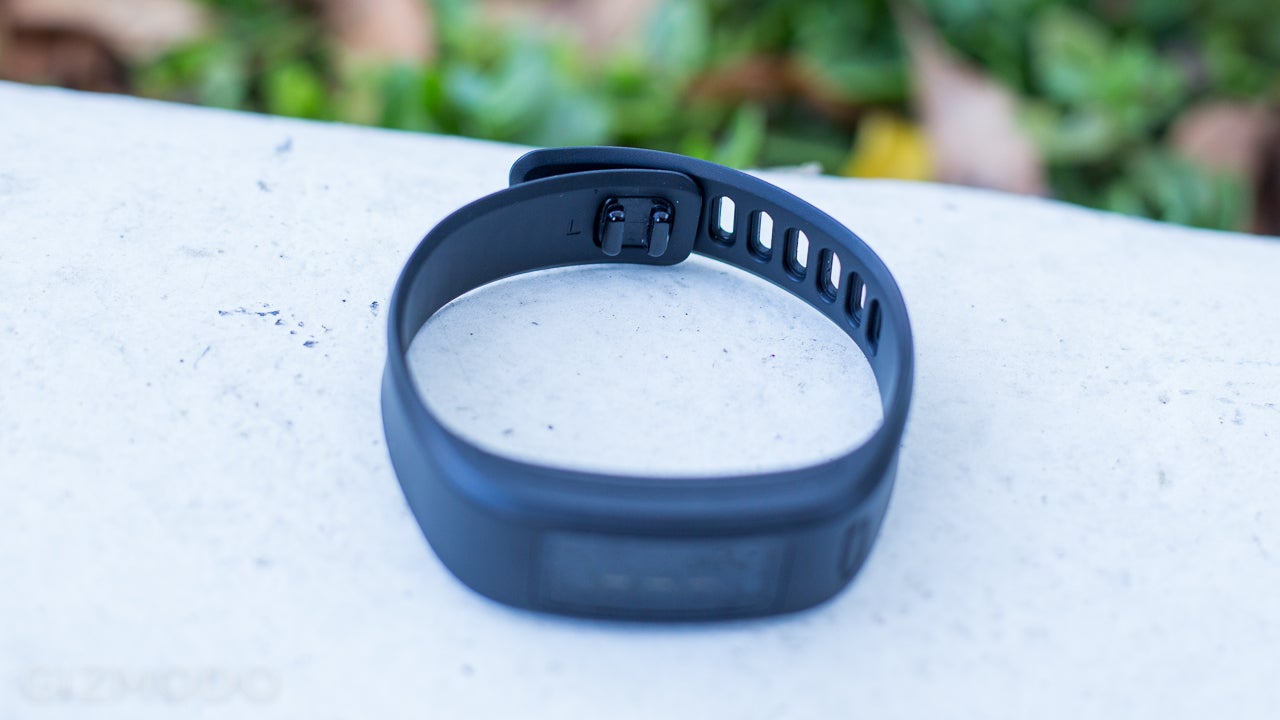 The Vivofit is a pretty sleek wristband. Up top is an always-on, reflective LCD screen. Just next to it is the one button, which you use for toggling through the different display screens. The band has a pair of posts that pop through holes to keep it in place. It's easy to adjust and low profile enough that it generally stays out of the way. 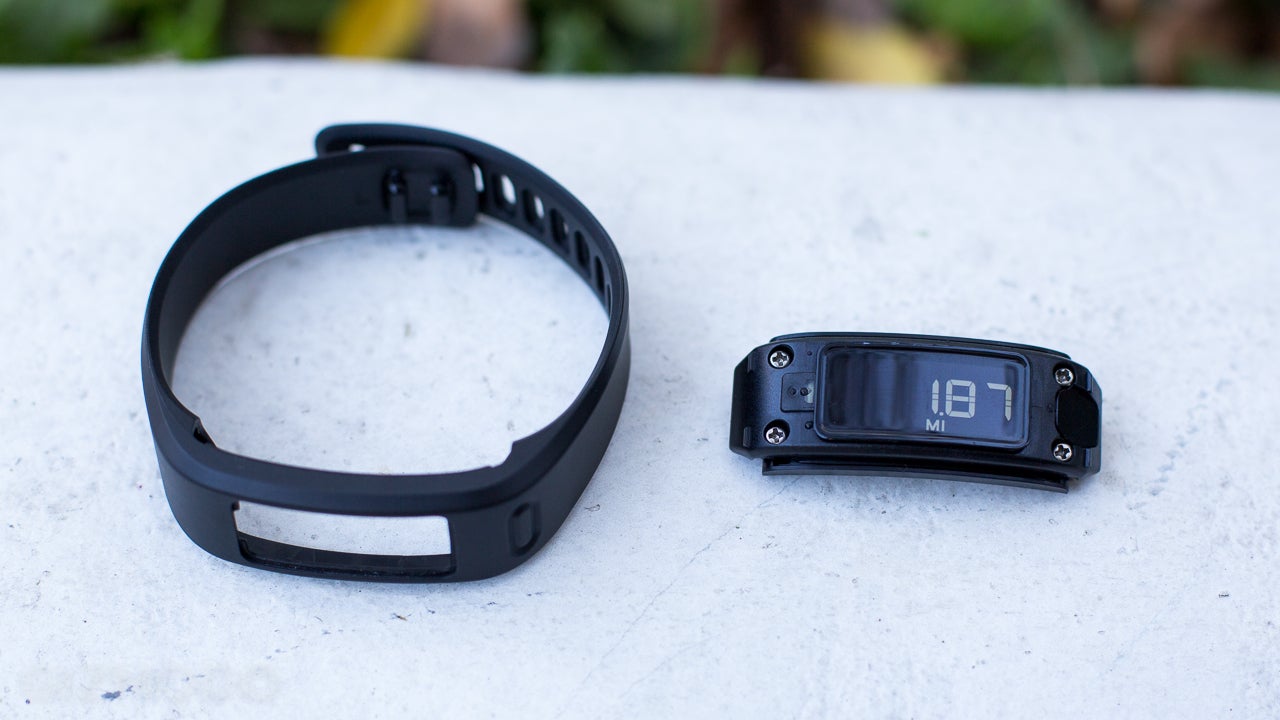 The device is actually a small pod that can click in and out of the wristband, should you want to change colours (it also comes with a small and a large band for different wrist sizes). It has an ANT+ radio, so you can pair it with a chest-strap HRM while you're working out, and it has a Bluetooth 4.0 radio, for sending data to your mobile device. If you don't have a phone that supports Bluetooth 4.0, it also comes with an ANT+ USB dongle, so you can sync directly through your computer.

It's being billed as the first tracker you basically never have to take off. It's waterproof up to 50 metres, which means swimming with it is no problem (nor is showering, obviously), and it uses a replaceable battery that Garmin claims lasts over one year. Obviously, we'll have to wait another 49 weeks for a verdict on that, but, essentially, you never have to take it off to charge it, you just replace the (cheap coin cell) battery once a year.

For starters, the Vivofit is actually pretty comfortable. I was a little worried when I saw that the clasp goes directly on my inner-wrist, but it's thin enough that it didn't apply too much pressure. It's also pretty good-looking while being fairly discreet. It's just kind of there. That said, in the few weeks that I wore it there were at least three times when the clasp rubbed against something, came undone, and the Vivofit fell to the ground. I was lucky that I noticed immediately every time and didn't lose it.

The always-on screen is nice, especially when you're running and you just want to get a quick look at your heart-rate. "Am I dying? No? Okay then, onward!" Nice for just getting the time of day, too. You'll notice that the screen goes longways across the band, though. At first, I was wearing it so that the screen that it was facing my body, so if I held my arm out straight I could read it normally. This actually resulted in uncomfortable tyrannosaurus arms. So, counter-intuitively, I turned the band around, so that it was toward my hand. When I wanted to read it I'd bend my elbow and shoulder, tilt my head, and basically touch my chest with my knuckles. This was easily more comfortable; however, that said, I much prefer the standard wristwatch orientation, like you see on the (currently unavailable) Fitbit Force. 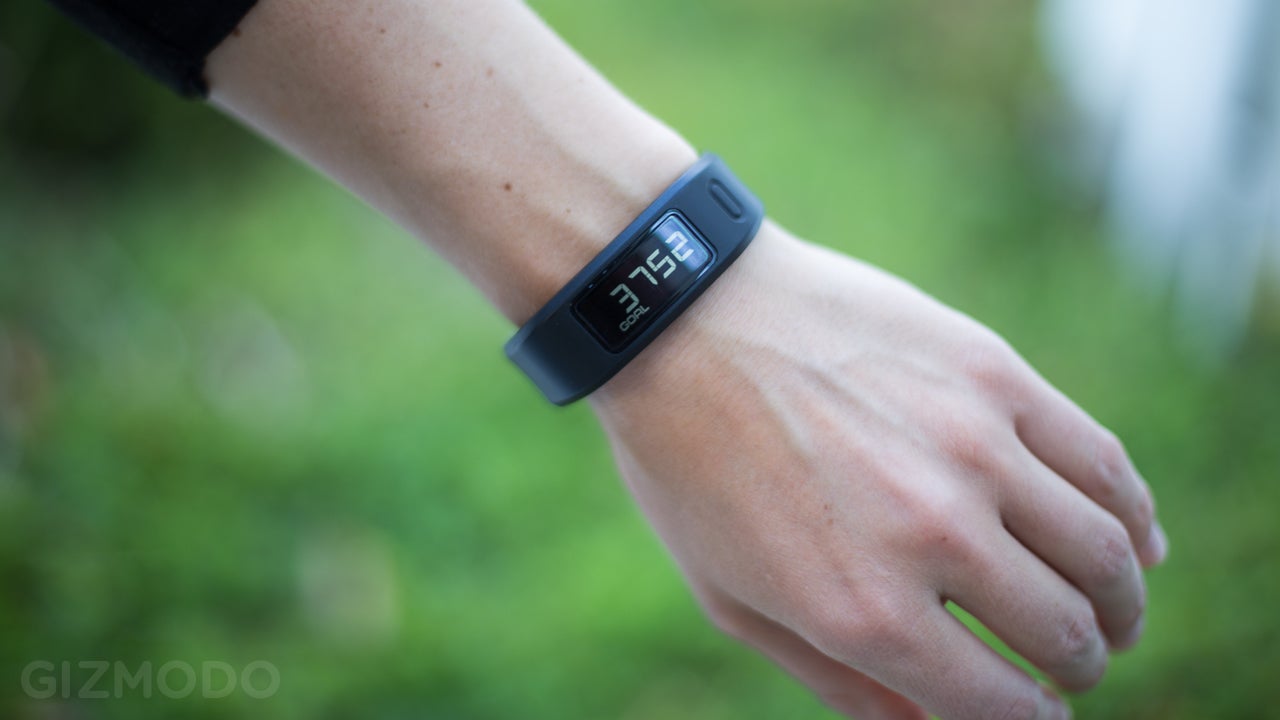 One of the best things about the Vivofit is that it sets your goals fluidly. If you didn't walk enough yesterday, your goal will be a little lower today. If you killed it, it'll be a little higher. It goes in small increments so as not to be overwhelming. Smart. Also, if you've been sitting on your arse for a full hour, a red bar will appear on your screen, taking up about half the display. Additional segments light up for each additional 15 minutes of lethargy. If you let the bar get all the way full the band will explode giving you a severe chemical burn. Just kidding, literally nothing happens. It just stares at you until you finally walk around a bit. Kind of disappointing, right?

Syncing with Garmin's HRM chest-strap only too a few seconds, but the phones were more problematic. I couldn't for the life of me get it to work with my Nexus 5. Turns out that Garmin doesn't support it yet, which seemed weird. You might want to check which devices it works with before you pull the trigger. That said, it worked just fine when pairing with an iPhone and the dongle/desktop software method worked, too. In all cases, you have to hold down the button on the Vivofit to initiate a sync. Most other bands do this automatically at regular intervals, which is more convenient and allows the apps more functionality. 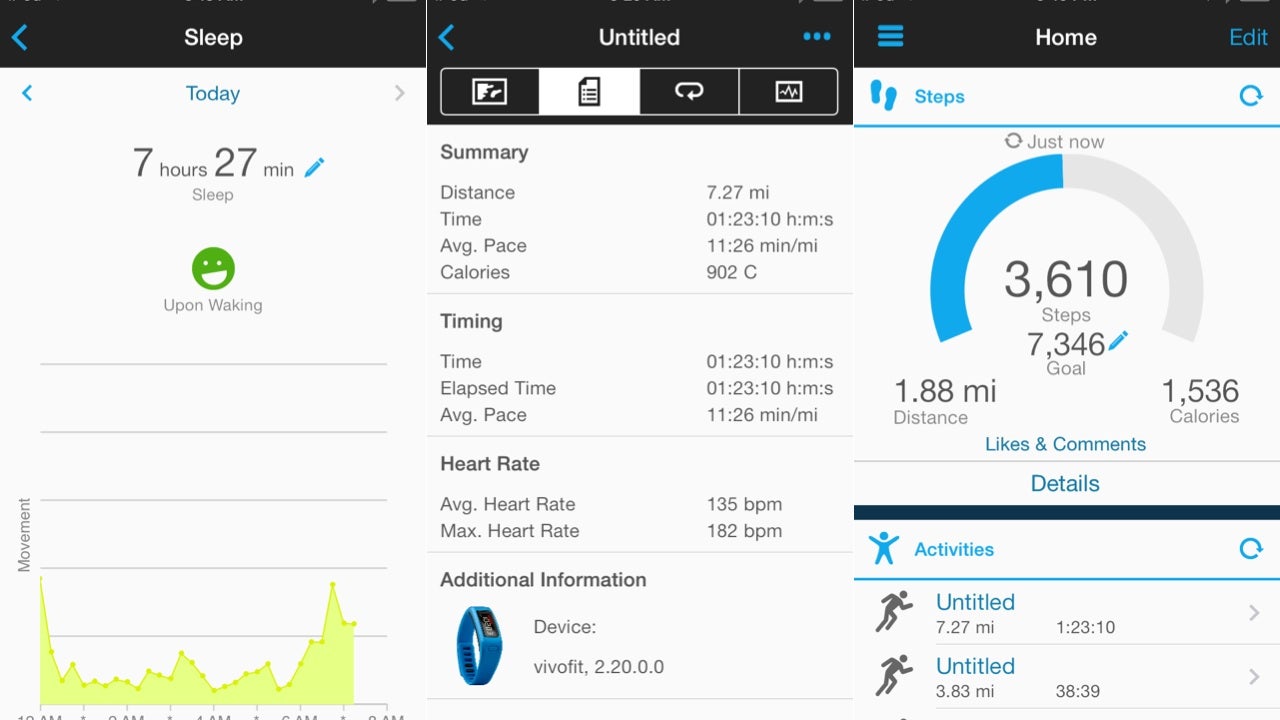 The Garmin Connect website got a recent revamp, and it definitely looks a lot better than it used to. This are more intuitive and there's a better flow in general. That said, there are still some gaping holes that need to be patched: Windows with missing information, and pages some pages looked like a plain .txt document. The mobile apps still need a lot of work. Aside form the Vivofit simply not working with a lot of Android devices, the apps just look kind of outdated. There a lot of lag within them and they're pretty ugly.

Decently comfortable with an understated appearance. I like the fact that one screen counts down to your steps goal. Actually, it being really waterproof is nice, and never having to worry about charging it is, too. The always-on display is definitely convenient while running, and pairing it with an HRM is an added bonus.

The biggest flaw is a simple mechanical one: the screen has no light! This makes it extremely difficult to see in dimly-lit situations. When you go to bed you're supposed to hold down the button for about five seconds to put it into sleep mode. But if you only hold it for 3.5, it goes into sync mode instead. Hold it two seconds too long, and you're in pair mode, but because you can't see the screen in the dark, you have no feedback to tell you what mode you're in. It doesn't beep, and it doesn't vibrate.

And because it doesn't beep or vibrate, the angry red "Move Bar" that lights up is essentially useless. You'd have to remember to look at it in order to know you're supposed to get up. If it could vibrate, it would be 20x more effective at getting you up and moving, and it could work as a silent alarm, too (as the Fitbit Force does).

No syncing with a lot of Android phones is disappointing, and the less-than-stellar mobile experience isn't so hot either. Because you have to manually sync by holding the button you lose out on your phone giving you more insight (in realtime) than the band alone can. Also, the clasp comes undone too easily for something that's supposed to be sports apparel. It also has no altimeter, and step counting is more than a little inconsistent. 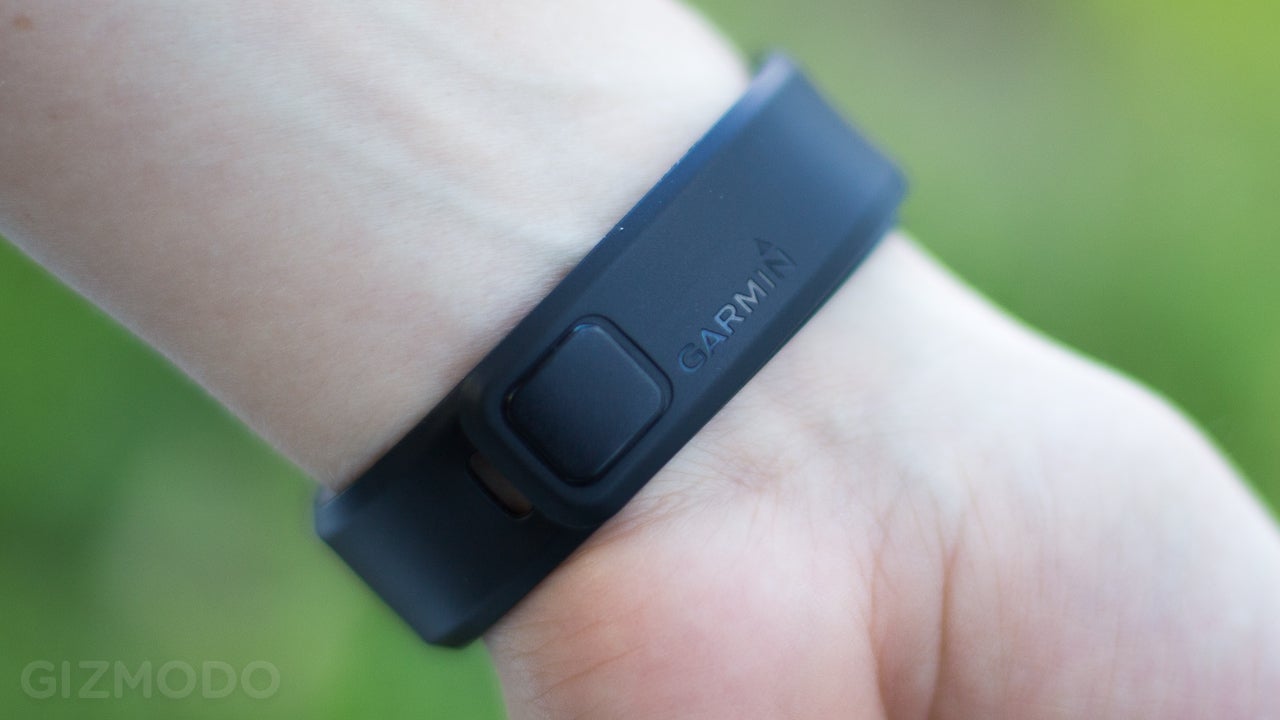 For £99 alone or £143.99 bundled with the HRM, this is a hard pass. It's got a few good ideas (like the Move Bar), but they're poorly integrated. Even the HRM doesn't make sense here, since you're just going to be putting it on for workouts, and this thing is just no good for tracking actual workouts. For instance, it thought my five mile run yesterday was 7.3 miles, which is way off, and even then there are lots of stats missing (maps, elevation, etc). A GPS watch is just so much better.

Yeah, not having to worry about charging is nice, but most of its competitors get over a week of battery life, so it's not like you need to charge that often. Ultimately, it's just way too expensive for what it can actually do. You'd be better off with a GPS running watch (like the Garmin Forerunner 220 or the TomTom Run) and a dedicated activity tracker like the Withings Pulse, the Fitbit One, or—when it eventually comes out—Epson's Pulsense Band. [Garmin]