Scientists Hacked a Blu-ray Player to Test for Salmonella

As much of the world migrates its movie needs from optical discs to hard drives, a team of chemists from Spain found a new use for a regular old Blu-ray player. They turned it into a cheap but functional medical device that could help out in developing countries.

The hack itself is actually sort of simple. The scientists simply replaced the player's data board with one that's custom built to read the reflectivity of the disc instead of the microscopic pits that hold the movie data. They then prepared regular Blu-ray discs by attaching bits of protein called probes—see below—and then covered the disc in a solution containing pathogens. (Salmonella and a parasite found in water have been used in tests so far). When they rinsed the solution away, the pathogens remained stuck to the probes and the laser from the player was able to detect it. 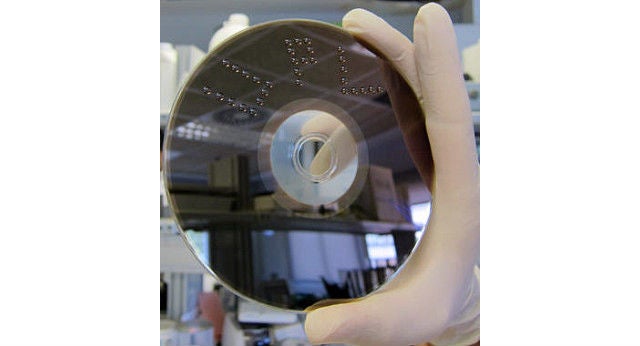 This method of testing is not quite as accurate as using actual medical equipment, but it works. That means that countless communities who can't afford expensive screening devices can make their own from relatively cheap parts. This could save lives!

You're probably asking yourself, though: Why Blu-ray? Researchers have used regular CD players for similar methods before, but Blu-ray is special. As PBS's Matt Zastrow explains, Blu-ray discs can hold more samples because they're extremely hydrophobic, meaning the water bunches up tightly on the surface. Blu-ray lasers are also capable of focusing on a much smaller area than, say, a CD player's laser. And think, if you ever get tired of finding clean water, you can just swap the Blu-ray player's original data board back in and watch Planet Earth. It's a perfect compromise! [Optics, NOVA]