Smartwatch? Please. We've already moved on to smart rings, magical digit-wrappers that control your world with a wave of the hand. They're everywhere—except, oddly enough, on our fingers. That's because despite the extravagant promises they're pitched with, smart rings simply don't work yet. And they may well never.

A handful of smart rings have slid across our screens over the past few months, each more shrouded in vapor than the last: Smarty Ring. Fin. This month, it's Ring: A Bluetooth ring that supposedly lets you do everything from email to send money to a nearby friend, all by wagging your finger in the air. It's raised nearly $700,000 (£420,000) on Kickstarter, despite only existing in prototype form.

While so many people are offering smart rings, no single company has succeeded in creating one on a consumer scale. Why not? I contacted an industrial designer and a wearables expert to find out.

Not all wearables are created equal

We're in the throes of a wearables-obsession—Glasses! Bras! Bracelets! Watches!—and if you're ticking off a list of accessories worn by a majority of the population, a ring is an obvious next step. It was either that or earrings, I guess.

But just because the watch works well as interface—a point that is itself debatable—doesn't mean a ring will. At a certain point, when hardware gets so small, it becomes less and less useful. Let's call it the law of diminishing devices.

"That's the double edged sword of wearables," says Gadi Amit, founder of the San Francisco firm New Deal Design and designer of Lytro and FitBit. "Some accessories are a natural fit for wearables, and others are forced. I don't think the forced ones are going to stay with us." Today, there's nothing more forced than a digital ring.

A functional smart ring is incredibly hard to make...

Don Lehmen, an industrial designer based NYC—whose first big project was funded on Kickstarter in 2011—shares Amit's skepticism. "Wearables are hard," he told me. "No one has gotten bracelets just right yet, so how can we expect that same tech to shrink down further to rings?"

Jawbone, for example, took its UP activity tracker off the market for a year after an explosively bad run. The relaunched version still has its issues. And that's a device that's much larger than a smart ring, made by a team with ample experience in the wearables space. Finding room for all of the sensors—to say nothing of the battery—in a bracelet or watch is a minefield, doing so with a ring is the Temple of Doom. Miniaturisation is happening quickly, but it's not there yet.

It's also still not entirely clear how safe keeping a battery and a bunch of sensors attached to your person is in the long run at all. That's why John McLear, the designer of the crowdfunded hit NFC Ring—one of the few smart ring-style devices that's actually being manufactured—chimed in on Ring's Kickstarter comments section to ask a few fairly crucial unanswered questions:

Please can you post a real picture of the ring (not a render)? What material is the ring? If it's plastic, what grade? What certification do you have to ensure the ring material won't damage the skin of the wearer? What is the link to your public Bluetooth ratification certificate?

That's not to say we shouldn't be excited about about a new technology. But it's worth noting that right now, since every smart ring we've seen is being independently funded on the internet, we know very little about safety and testing. For example, with Ring, we know next to nothing about what the ring is made of, whether it's been safety tested, or what it even looks like in real life, though some SXSW attendees reported that a prototype was on view at the festival last week.

Here's the non-rendering its creators provided, blurred because of patent issues: 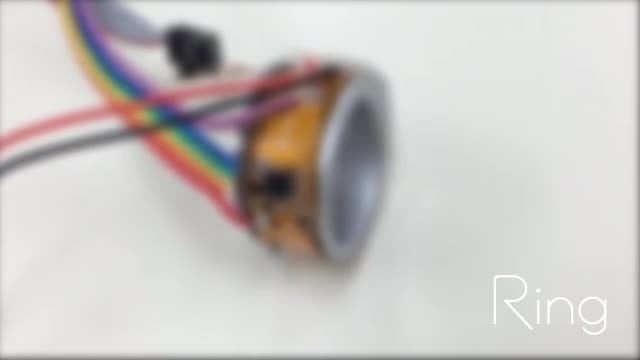 Set aside all of the issues of manufacture and safety. Let's say Ring arrives, in less than four months, as promised, perfectly functional. What kind of role will it play in your life? Is a ring the best solution for interfacing with a broad ecology of other devices? What does life with Ring really look like?

And when you're wearing Ring, your phone is never far away. Let's say you're writing a text message to someone. Ring allows you to write that message in the air, rather than typing it out on your phone or smart watch. A neat trick! But you still have to select a contact, for example, and customize the message in other ways. In just about every context, your phone is still part of the interaction.

In light of all that, the tagline for Ring—Shortcut Everything—is more than a little ironic. What's easier: tracing the complicated outline of a camera in midair, or swiping up on your iPhone?

Rather than simplifying, Ring adds another layer of interaction to what you're already doing.

"It calls into question whether you could actually sustain the usage and really assimilate an object that dramatic into your lifestyle," says Amit, who adds that the size is a major deterrent to use, too, "unless you're an NBA star who just won a major championship."

A bridge to the future

Just like all good vaporware, the smart ring is a brilliant idea that is arriving a few years ahead of its time. It's a problem compounded by the fact that this is an era when anyone can pitch the entire internet on a concept. Imagine if Kickstarter had been around when Back to the Future came out. Hoverboards and self-tying sneakers for everyone!

Excitement about a technology that isn't quite ready isn't a bad thing. In fact, it's what drives us—as fans, designers, and engineers—to go make that stuff happen, even if it doesn't look how we originally imagined it would look. False starts, misinterpretations, and half-baked ideas are absolutely crucial to the forward march of technology.

Smart rings articulate what we want from technology. What we dream about it. Namely, we want it to disappear, or at least be so diminutive that we forget about it. We don't want to be tethered to devices anymore. We want an invisible ecology of apps and devices that we communicate with through tangible, tactile interfaces. Things we can feel. And for most of us, a ring seems closer to that imagined future than a phone.

But we should dream bigger. Soon, we won't need rings at all. Truly natural interfaces aren't that far off. Kinect doesn't need a middle man to read your gestures. Neither does your Nest Protect. A home where you can speak, or gesture, to control your devices is already being built in Austin, Texas. We'll be able to gesture in midair and get what we want without a clunky piece of jewelry.

In that light, rings are just a crutch, the temporary technological bridge we need to walk away from hardware forever. For now, though, that bridge is made of nothing but hot air.