The Grandfather of the Space Shuttle Looked Like a UFO

In the late 1950s, at the dawn of the Space Age, the idea that a wingless vehicle could somehow generate lift just from its body shape was seen as beyond preposterous. But less than a decade later, this early forerunner of the Space Shuttle proved the design far more science than fiction. 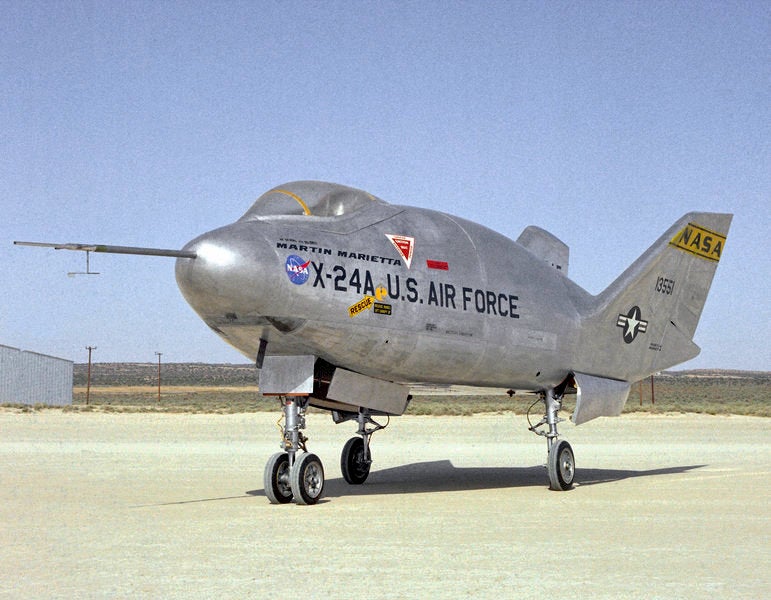 In 1957, physicist Dr. Alfred J. Eggers Jr. proved, in theory, that space reentry vehicles would be able to generate aerodynamic lift during their transit through the atmosphere by altering their symmetrical nose cone shape, decreasing the craft's rate of descent and increasing its likelihood of surviving. From 1963 to 1975, the US Air Force and NASA collaborated to design and test this theory. The result: the Martin Marietta X-24. 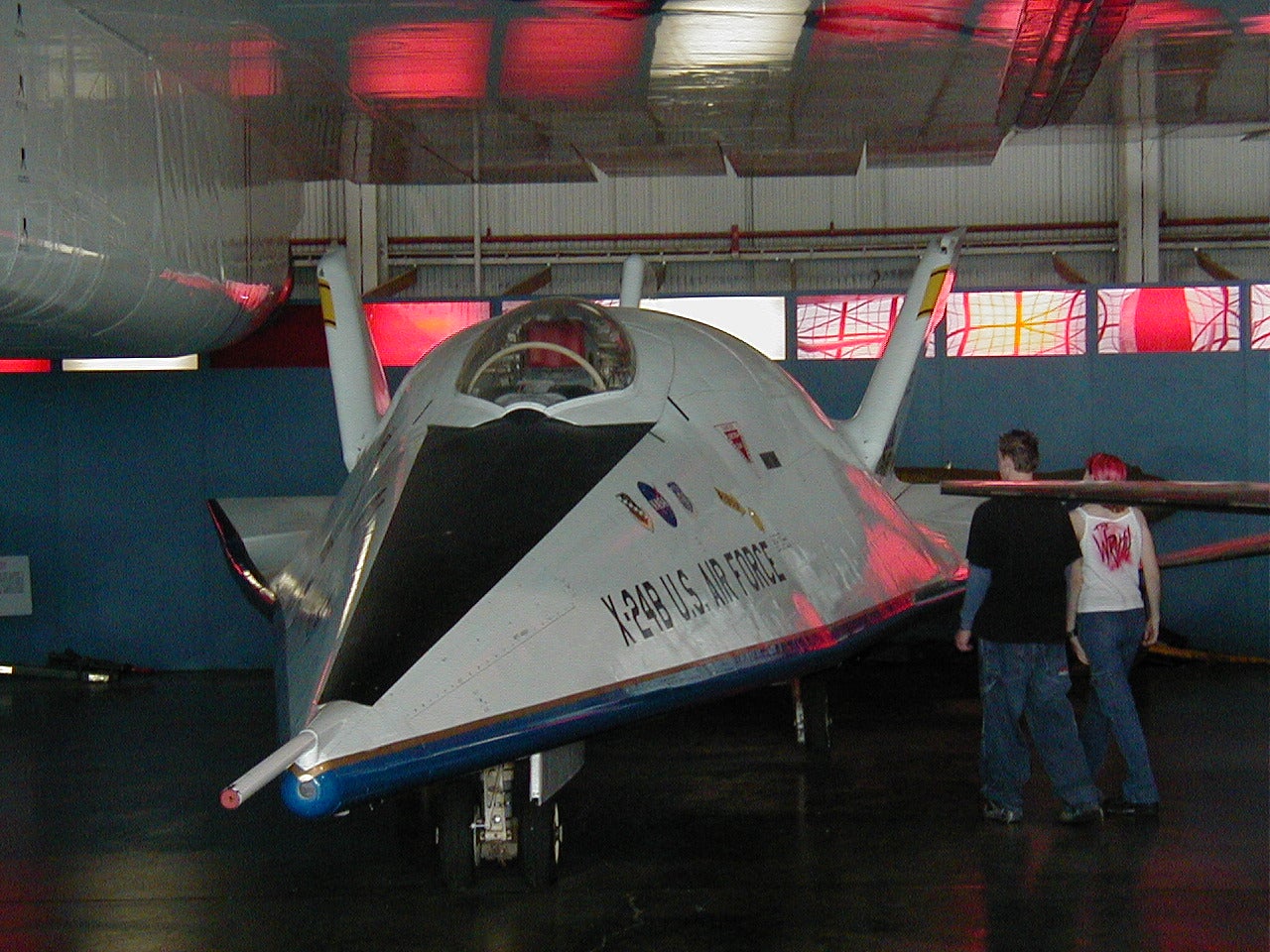 The X-24B at the USAF Museum

The single-seat Marietta measured almost 25 feet long, with a "wingspan" of just under 12 feet, though it's not really fair to call them "wings." The X-24 used a teardrop planform with a flat under-surface attached to the curved upper half with a trio of vertical fins sticking out of it—the outer two of which resemble the upturned winglets on modern passenger aircraft. It didn't have proper, lift-generating wings, but it didn't need them. Nor did it have an engine; didn't need one of them either. The Marinetta was built to coast back to Earth via an unpowered landing. 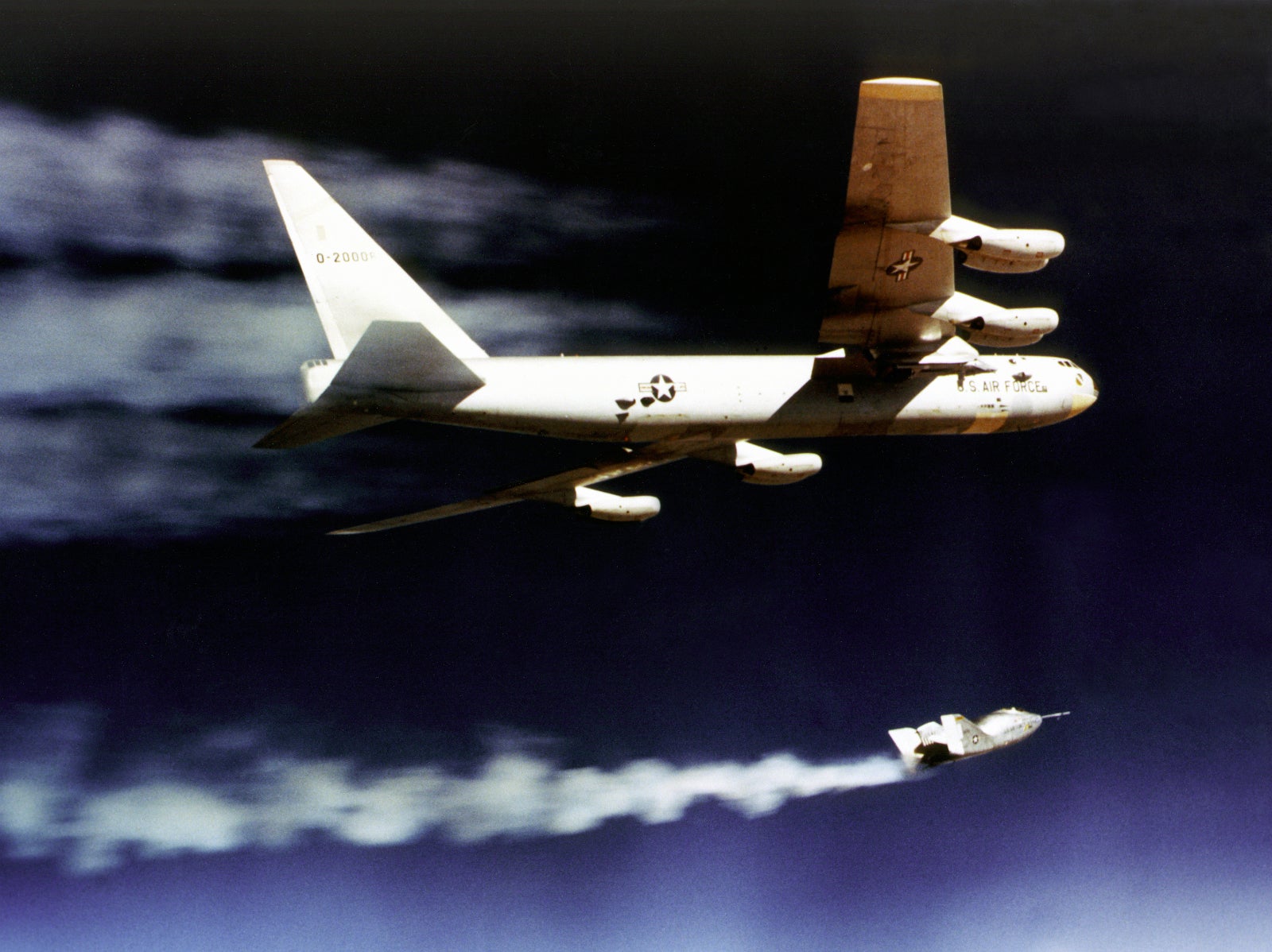 And it proved it could on March 19, 1970. Launched from a B-52 in the skies over Edwards Air Force Base, the X-24A free-fell for a moment before its pilot, Jerauld Gentry, lit the and attached rocket engine that propelled the Marinetta into the upper atmosphere at speeds speeds approaching Mach 1 to simulate the necessary re-entry conditions. Once the engine cut out, Gentry proceeded to successfully land the craft in a nearby dry lakebed. And during a subsequent test in 1972, the X-24B proved that the craft could land on standard airport runways—an essential ability of the later Space Shuttles.

The operational Space Shuttle fleet bore little resemblance to these vehicles because, in the early 1970's, Lockheed Space Systems developed a lightweight ceramic tile—designed to absorb the heat of reentry—that made building more conventionally shaped vehicles far more economically feasible to build than lifting body designs. If only we knew. However, the lifting body concept was later revived in the 1990's for use in a prototype ISS return vehicle, the X-38. [Lockheed - Wikipedia]