Confirmed: Tweeting Al Qaeda Jokes at Airlines Will Get You Arrested

Yesterday, a 14-year-old Dutch Twitter user learned the hard way that airlines don't take bomb threats lightly. And after blowing up Twitter feeds everywhere, @queendemetriax has officially been arrested by the Rotterdam police. 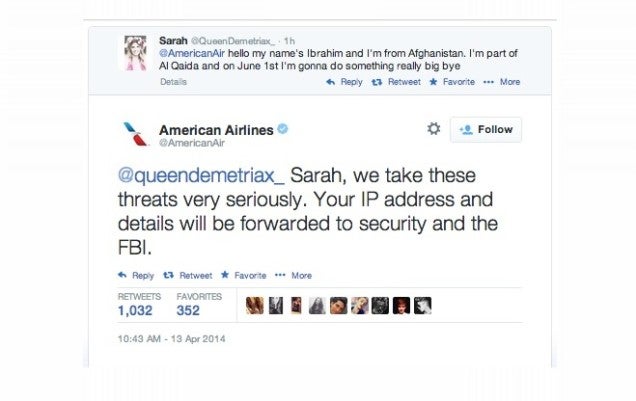 Obviously, American Airlines didn't quite see the humour in the situation. And to the company's credit, whoever is running its Twitter account handled the situation flawlessly. But it wasn't just an empty threat. It appears that American Airlines really did forward along her information, judging by the Rotterdam Police's recent tweet.

Of course, this isn't the first time a poorly planned joke on social media has ended in legal consequences, but it's an apparently necessary reminder that the things you do online can have real world consequences. The girl's Twitter account has been suspended—but not before gaining a score of new followers.

We're guessing it probably wasn't worth it. [@mpoppel]