The Tech That Powers Six of the Greenest Buildings of 2014

Hearing the word "sustainable" conveys pretty much zilch about what makes a building efficient—more than anything, it's a term that tends to bore people. But if you look closer at the mechanical systems at work in some of the most energy efficient buildings going up today, you'll find technology that sounds almost sci-fi.

The American Institute of Architects recently announced its Top Ten Green Projects for the year, and the list gives us a close look at some of the most incredible green technologies on the market right now: From facades that react to the movement of sun across their face to building on landfills, here are a few of the highlights.

Portland, if you haven't heard, wants to end homelessness in the city by 2015—and a big part of its Ten Year Plan is shelters like Bud Clark: A 90-bed shelter and 130-apartment development that helps the homeless get back on their feet. The idea, according to the architects, was to create "a durable place of dignity for our most vulnerable citizens while treading lightly on the planet."

The real centrepiece of that treat-lightly strategy? A complex solar system that collects enough energy to heat an astounding 80 per cent of the building's hot water. It's one of the largest such systems in the Pacific Northwest, actually, but it probably won't be for long—the architects say this baby saves the Commons up to £35,600 in energy costs every year. Another highlight? The rainwater collection system, part of which waters this outdoor garden:

It looks like a perfectly lovely waterfront park, but below its six acres of green grass and football fields run one of the most high-tech mechanical systems around.

Starting from the top, there's an array of PV panels build into that wooden sunshade at the top of the hill. Below it, the grass grows thanks to a complex irrigation system that uses the greywater runoff produced from the playground down below.

Below all that? A community facility and offices that are heated and cooled by 15 wells drilled deep into the bedrock below the park. They circulate hot or cold water around the building through arrays of pipes in the floor. The whole park is like a complex, self-sufficient mechanical ecosystem.

This 18-story federal building is on track to become one of the lowest energy-use buildings ever built in the US What's more, it's a pre-existing structure, an "ageing energy hog" according to the architects.

A big part of the transformation? That reed-like façade you see curving along the structure. The old building was stripped down to its concrete bones, as you see above, and replaced with this shimmering new skin.

It's not just aesthetic: It's actually a finely-tuned series of sun shades that tilt to provide the greatest level of shade based on where the sun is—they help the building use 60 per cent less energy than its previous incarnation. And perched atop all those louvres? A 180-kW photovoltaic array and rain water collection system.

There's a whole lot of cool stuff going on in this building, but the real highlight is the huge heat and power plant it sits on top of.

The plant is fuelled by biomass—specifically, thousands of waste wood pallets—as well as gas, photovoltaics, and other energy sources. It produces 60 per cent of SUNY-ESF's annual heating needs for all of campus, and 20 per cent of its power.

And since this is a building for science and forestry, it's also a teaching tool: The entire power plant is designed to fit groups of up to 20, and is colour coded to help students figure out what's going on.

The Boy Scouts are changing: The organisation recently introduced a sustainability badge, and at their new national adventure centre in West Virginia, green tech is on display: The Sustainability Treehouse is an interactive playground where kids can learn about the most basic and the most complex sustainable technology.

But to the green stuff: Splayed across multiple layers of tree house, there's a 6,450-watt photovoltaic array, two 4,000-watt wind turbines, and a 3785 litre cistern and water cleansing system. 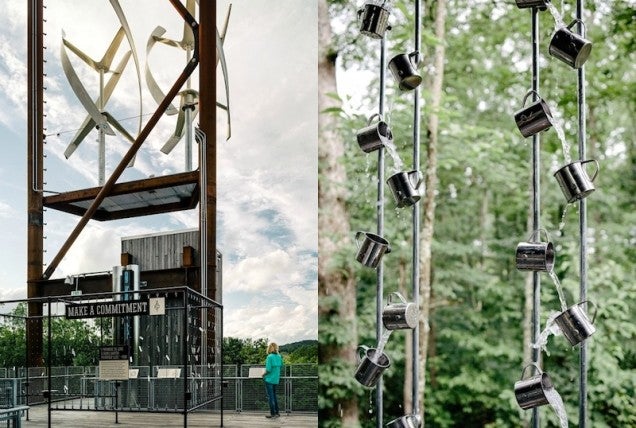 There's also a ton of low-tech interactive elements, as Gizmodo's Alissa Walker explained last year when the treehouse opened. For example, there's the Rain Chain, "made of stainless steel camping cups, which transfers rainwater falling onto the roof into a cistern below. The cistern cleans and purifies the water then pumps it into a drinking fountain equipped with an LED message board that displays how much has been collected and consumed." Also, it looks like a straight-up Ewok Village.

There's also plenty to say about this building in Los Altos, but let's talk about what it's made out of: Instead of mixing the concrete with cement, the crew used mostly slag—the glassy by-product of making steel. Using slag instead of cement can lengthen the life of the concrete from 50 to 100 years. Plus, it's just stronger.

Then there's the wood, which was all either FSC-certified or salvaged. A lot of that red veneer you see? That was sourced from Eucalyptus trees that were cut down during the process of rebuilding Doyle Drive and the Predisio in San Francisco. Even the copper on the façade is 75 per cent recycled—and the stone? That came from Mt. Moriah, on the border of Utah and Nevada.

Do you live or work in a super-efficient building? Or design them for a living? Tell us about it below.