Are There Good Reasons to Jailbreak After iOS 8?

By Michael Simon on at

For millions of people, the entire point of having an iPhone is the ability to jailbreak; without the tweaks and modifications that come with liberation from Apple's walled garden, the iPhone just wouldn't be nearly as much fun. But after iOS 8, will there be any point? Or has Apple made jailbreaking obsolete?

It's not like this is the first time Apple has incorporated popular jailbreak features into an iOS update. Before there was copy and paste, the Notification Centre, and full-screen multitasking, there were popular Cydia downloads that added those missing functionalities to jailbroken phones for those who weren't content waiting around on Apple.

In iOS 8, however, Apple it seems has waded further into the dark side than ever before. Even beyond the marquee features like interactive notifications and iCloud Drive, Apple's new mobile operating system is packed with subtle enhancements that make it more useful than ever – and just might give people a reason to keep the locks on. iOS 8 might not open the doors quite as wide as Android, but it's given developers a set of keys they never had before, from powerful extensions that let apps communicate with each other to versatile Notification Centre widgets that provide short bursts of information at a glance.

It's hard to ignore the newfound sense of flexibility in iOS 8, to the point that in some ways it feels like a jailbroken version of iOS 7.1: The helpful word suggestions as you type. The quick-reply interface when you pull on a notification. The Chat Head-like circles above the multitasking carousel.

It's all enough to make you wonder if it's even worth jeopardising your warranty; that's before you install a third-party keyboard. Perhaps not surprisingly, Cydia developers would beg to differ.

"I hear it every year, 'Now that Apple has—add new feature here—I don't need to jailbreak my device,' said Thientam Bach, aka Surenix, author of Auki, a quick-reply iOS 7 tweak. "However, just as many, if not more people still ask for a new jailbreak."

And you don't have to look far for the reason why: it's the distinction between more features and full customisation. Cydia isn't just for picking up tricks that Apple hasn't got around to adding into iOS, it's about making your iPhone unique. No matter how many jailbreaking concepts make their way onto our iPhones by the time Apple hits version 10, there will always be developers and designers who want to think a little differently, tweaking this and modding that to their desire.

Back when the multitasker was still icon-based, Newar Choukeir (aka Sentry) released an impressive utility called Auxo that brought full-screen snapshots of running apps to the slide-up linen-backed tray. And when iOS 7 adopted that very method, he super-charged the app switcher with an all-new concept that utilised gestures and Control Centre toggles to improve upon Apple's method. 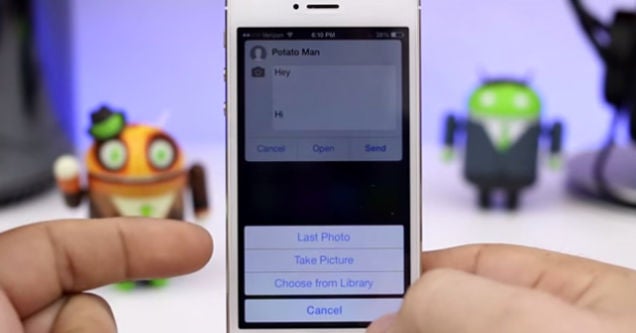 It's an important reminder that when Apple adopts a popular jailbreak feature, that's not the end of the line. If anything, Apple's newfound sense of openness will only empower Cydia developers to keep testing the limits of what iOS can really do.

Take keyboards: iOS users everywhere can't wait to start experimenting with all the new third-party keyboards that are going to land in the App Store this fall, but they might not be as revolutionary as you think – at least not at first. For one, Apple still holds the final say over what keyboards are allowed, and it might not be as easy as developers think to bring their ideas to life through official channels. Open isn't quite as open as it sounds.

"iOS 8's Keyboard Extensibility constraints are quite limiting in what they allow you to access," said Choukeir, whose AltKeyboard 2 brings gestures, secondary keys and letters than properly reflect the state of the shift key. "Even things you may take for advantage like auto-correct or auto-capitalisation would have to be re-engineered manually. Due of these restrictions, AltKeyboard will certainly continue to live on in its jailbreak incarnation."

So, while Fleksy and SwiftKey will certainly make their mark, more advanced concepts will still likely have their origins in Cydia.

The same applies to interactive notifications. While their introduction in iOS 8 represents a huge improvement over the previous method, the implementation is still fairly limited; in the iOS 8 beta, for example, the only actions for incoming emails are "Mark as Read" and "Trash."

"I was 90 per cent sure Apple was going to introduce quick reply in iOS 8, and we got that and more," Bach said. "However, if we aren't going to see any additional features to quick reply in autumn ... that's where Auki will come in."

And so it goes. Apple has made it easier and more enticing than ever to develop for iOS, but there's a reason why designers like Choukeir, Bach, and countless others are drawn to jailbreaking. In a word, freedom. While everyone was complaining about the crude, candy-coloured icons in iOS 7 last year, jailbreakers were imagining new ones, whether it's the flat long shadows of Zanilla or the sophistication of Elite 7.

"Opening a door for opportunities that would otherwise not be possible is what jailbreaking is," Choukeir said. "And that's what it always will be."