The Internet's Own Boy: Why Aaron Swartz's Story Matters More Than Ever

Aaron Swartz's story is a complicated one, with many moving parts—it's no easy task to do them all justice with a single film. But The Internet's Own Boy, a new documentary that chronicles the late 26-year-old's internet activism, fight against the feds, and ultimate death, manages to sew them up into one seriously gripping thread.

There have certainly been very many words written about Swartz since his suicide in January, 2013. But The Internet's Own Boy tells this well-trod story in a fresh and deeply personal way. I recently sat down with the film's director, Brian Knappenberger, to talk about the making of the film—which was funded on Kickstarter—and he was perfectly suited to talk about Swartz's legacy.

First, a refresher: Aaron Swartz was a programmer and a internet activist—a prodigy who very literally helped shape the early internet. He was a co-owner of Reddit, he started DemandProgress, he helped form Creative Commons, was instrumental in the creation of RSS, and he was integral in the fight against SOPA and PIPA. He was a crusader for an open internet, one that we could sorely use today. At the time of his death, Swartz was under investigation from the Feds for his efforts to make JSTOR files public and free for anyone on the internet to use by way of downloading and reuploading them in bulk. He was facing possible jail time and upwards of $4 (£2.3) million in fines, and had been fighting the battle for a very long time. Tragically, he buckled under the stress, and killed himself at the age of 26.

But The Internet's Own Boy is not just about the tragedy or the loss. It's not just about Aaron Swartz the public figure or the activist. Interspersed with home movie footage, personal photos, interviews from friends and family, as well as Aaron's own words from panels and taken from his own blog, the doc is very much the story about Aaron Swartz himself. And it drives home a single overarching point: That this is one person the world is worse off without.

"There are two parts to the story," director Brian Knappenberger told Gizmodo. "There's a compelling emotional tale of this guy's life. So you're telling the story of this one person. But at the same time he was interested in so many interesting, relevant topics, and even what happened to him, not only his choices but external forces—from the government that was acting upon his story, those things touched these bigger issues. As a storyteller that works well. Because not only are you telling the story of this personal life, but you're also able to dive into these bigger issues that he cared about and obviously I care about." 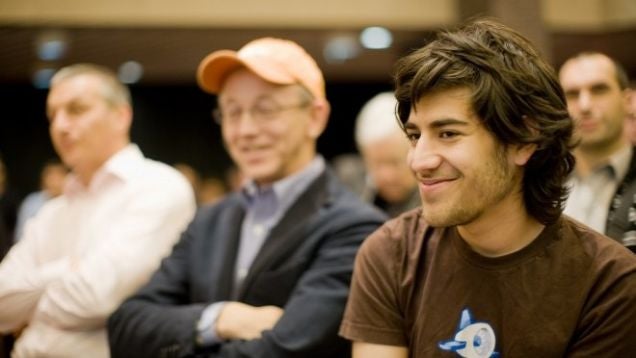 The tragedy of the loss of Aaron Swartz is still fresh, which is a very notable part of this doc. Swartz died on January 11, 2013. Knappenberger started on the film about a week later, and finished it in just under a year.

For his friends and family, the grief was still very palpable throughout the making of the film, and it probably still is. But those closest to Swartz—parents, brothers, girlfriends, friends, mentors, and colleagues—spoke, with the exception of Reddit co-founder Alexis Ohanian. And everyone had a story to tell.

"People were sort of battling two different impulses," Knappenberger told Gizmodo about the people he interviewed for the film. "One was certainly anger at what happened to [Aaron], frustration and the sense of loss and wanting to express what they saw as the injustices of Aaron's story. Then [there was] the depth of the loss, the communal loss of this kid. There was balancing that with the personal difficulty in talking about it. I think it helped that...I knew a lot of people through previous work and I was sort of a part of that community. [People who participated in the doc] looked at my other work and said this guy is probably, hopefully going to do [the story] justice. [Aaron's] family was really—for them to say that they wanted to be a part of it was probably the most important part of it. It took a lot of courage for them to talk to me."

Knappenberger isn't new to the hacker world, either. He's been making documentary films about this world for about 15 years, including We Are Legion: The Story of the Hacktivist, the 2012 documentary about the Anonymous collective. So he had a lot of access, which is apparent throughout The Internet's Own Boy. Although he never met Aaron himself, you get the sense that Knappenberger really knew him—or at least that he got to know him.

The story is told mostly chronologically, starting with home movie footage of Aaron's childhood in suburban Chicago. You learn that he was a precocious kid who read at a very young age and whose intellect was apparent almost immediately. Aaron's brother and his parents tell this story with great poise, which is one thing that really sticks with you throughout the film.

Aaron was working on making the online world better long before he could even drive a car. "You see [Aaron's] fingerprints all over the early Internet," Knappenberger told me. "He was a significant, substantive contributor to the RSS working groups, you know, the free culture movement has a lot of his energy." This was a massive moment in the development of the internet, and it shows: Interviews with Tim Berners-Lee, the creator of the world wide web, as well as more than a dozen others who are integral to the web, like Lawrence Lessig, drive home Swartz's involvement.

But Swartz's involvement with RSS was just the beginning. "He was a technical architect of Creative Commons, which millions and millions of people use on Flickr every day," Knappenberger added. "There was [his work on reprogramming] Reddit, which is the number one social news site in the world. Then he took this turn toward putting his skills in the service of social justice issues and really using internet as a way of mobilizing grassroots political movements. I think, again, that effort is still part of our world. People still literally use the tools he created to organize political movements online."

The Internet's Own Boy doesn't just drive home how tragic the end of Swartz's life was. It drives home how pertinent his story still is today. Swartz was very clearly made an enemy of the state for doing things that aren't exactly wrong. While he might have violated laws, the laws regarding digital property are severely outdated. The Computer Fraud and Abuse Act has had no meaningful changes made to it since 1986. I wasn't even alive in 1986! The internet was in its early stages.

The Internet's Own Boy drives home how desperately change is needed for the internet's future. And there is change happening, slowly but surely: last year there was a bill introduced in California to amend the CFAA. It also drives home a corollary to that point: Anyone can make a difference. And as we face the battle over Net Neutrality—a fight Knappenberger said he is certain Swartz would be fighting—it's never been more important to be involved. That might sound like a cliché to you, but after seeing The Internet's Own Boy, it feels like anything but.

Aaron Swartz very literally made tools that equipped us all to make changes in the world for the better. Now it's up to us to do him justice.

The Internet's Own Boy opens in cinemas 29th August. You should go and see it.