The FIFA World Cup may be a nearly century-old institution, but mere minutes ago, it kicked off with the most advanced mind-controlled exoskeleton the world has ever seen.

The first-of-its-kind kickoff came from the cyborg-like toes of someone who is, in fact, paralysed from the waist down. But paralysis is no match for the Walk Again Project's exoskeleton, a thought-powered system that includes a helmet with an accompanying microchip, a t-shirt with built-in sensors, metal leg braces, and a battery-turned-backpack. 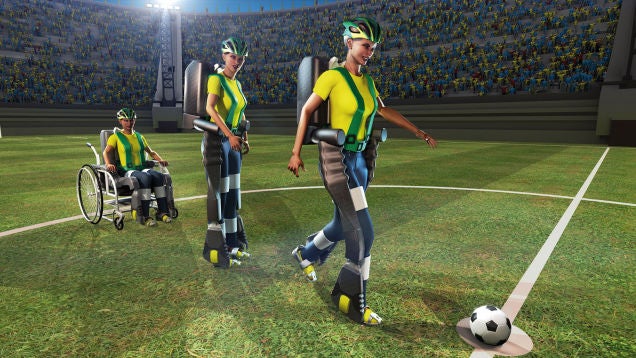 When wearing the suit, all you need to do is imagine yourself making the motions, and the suit handles the rest of the dirty work. The electronic impulses from our thought gets translated by the chip into actual, digital commands for the robotic limb to perform.

Of course, this isn't the first time scientists have tried to use robotics to translate thought into motion. But this iteration has made enormous strides. As Alan Rudolph, Ph.D., the vice president of research at Colorado State University and managing director of the project told Pop Sci:

It won't be herky-jerky. The integration of the hardware and human signals will be significant, with truly elegant fine motor control.

What's more, the machine's sensors have been fine tuned to have the same sensing capabilities as human skin, allowing it to translate temperature, pre-contacts, touch, and vibration.