I've been showing friends something I picked up at Google's developers conference yesterday, and it's been inspiring ooohs, and wows, and squeals of joy and delight. No, it isn't a smartwatch. It isn't even a gadget. It's a cheap piece of cardboard, and it's getting even the tech-jaded people here excited.

The premise is simple. A cardboard contraption you can assemble in about 45 seconds. Just drop your phone into the little cardboard viewfinder you wind up with, hold it up to your face, and you're immersed in a virtual reality world comparable in resolution to the first version of the Oculus Rift, if not better (depending on your phone). Turn your head to scroll through a row of apps, and on the left side there's a metal washer that's held on by a magnet. Flick it down to click on something. It's incredibly intuitive, and equally impactful.

Facebook has Oculus. Sony has Project Morpheus. Reports have Samsung making a VR headset as well. So why, it was fair to wonder, wasn't Google getting into the VR game? Well, it just did, and the way it's going about it is absolutely genius. Rather than relying on an expensive piece of equipment (a headset with dedicated screens) Google Cardboard essentially gives virtual reality to everyone who has an Android phone. For free. The implications of that are tremendous. It's the first time that virtual reality—good virtual reality—has ever been so ubiquitous, cheap, and readily available.

Google gave out a kit yesterday, but it's easy to make one of your own at home. Less than 24 hours after it was announced, Dodocase is already making and selling pre-made kits online for $20 (£12). You can expect to see more (many more) soon. They'll be made from different materials (3D printed?), some will surely allow you to comfortably strap them to your face, just like an Oculus. Essentially, it can instantly be as ubiquitous as Android phones. You just have to install the Cardboard app on your phone, and be running a recent-ish version of Android. 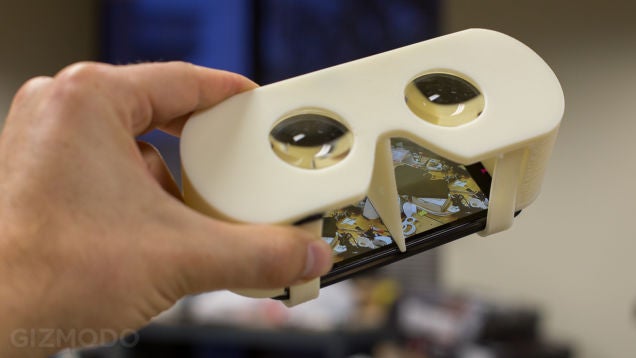 This isn't the first time we've seen something like this, actually. Back in March, when we visited USC's Institute for Creative Technologies and tried the US Navy's version of the Oculus Rift, we also saw some open-source prototypes that were, essentially just like this. Some were made of cheap foam-core, some were 3D printed, but basically they were holders for a couple cheap lenses with a divider between them, and they held a phone.

So anybody could have made something like this at home, provided they had a bit of coding knowledge. The difference is that Google had the wherewithal to make an easy-to-use app that already has a bunch of great examples of how Cardboard can be used, and, of course, they're making the development platform open so that anybody can make awesome apps that leverage this technology. It's the instant democratization of virtual reality, made dirt cheap and readily available to literally hundreds of millions of people.

What can you do already? You can fly through space, or over cities in Google Earth. You can use Tour Guide to get more information about a place you're visiting. You can see what it looks like to climb up Mount Everest. You can find yourself in a room full of YouTube videos, where you flick the washer to pick the one you want to watch. You can find yourself inside the Pixar-like world of Windy Day, watching the story unfold around you. You can play games where you run around to collect coins and physically jump to reach the ones above you.

Many Android phones allow you to take Photospheres—full 360 degree panoramic images. With Cardboard you'll be able to go back to those locations and experience them like you're standing there again. It's legitimately incredible. And that's before app and game developers have even gotten their hands on it.

Sure, there are a handful of very good developers working on stuff for Oculus—and there will be plenty more now that Facebook is driving the bus—but there are orders of magnitude more people who are already actively developing for Android, trying to reach a much wider audience. That's going to equal rapid deployment of some very cool stuff.

We also got to hear a little more about how Cardboard works. For example, the washer makes for an effective clicker because these phones have a magnetometer that serves as a compass. When you flick the washer it disrupts the magnetic field slightly, which your phone can sense. The downside is that it renders the phone's compass effectively useless while you're using it, which is too bad, because this could have some cool navigation applications. Maybe they'll figure out a way around that in the future, like voice-based commands, or a motion something that uses the accelerometer. The Cardboard we were given also has an NFC tag in it, which tells the phone when it's in the viewer.

What might we see next? Probably Google's Spotlight Stories added to the Cardboard catalogue. There is a ton of stereoscopic 3D content on YouTube already, so we wouldn't be surprised to see YouTube work to make Cardboard a viewer for all that great content that most of us don't get to check out at home. Imaging how much more terrifying all those crazy GoPro videos will be when they become super immersive.

Cardboard was started as a 20-percent project of Googlers David Coz, Christian Plagemann, and Boris Smus, and it's very much in its nascent stages of development, but because it's already available to consumers, it has all the potential to become the most widely-adopted virtual reality platform in history, practically overnight. All that from a bit of corrugated paper.