The 10 Best Things About Building a New Gaming PC

Building your own PC can be time-consuming and stressful. There are a thousand things that could go wrong, and any one of them could cost you hundreds of pounds. And yet we do it anyway. Why? Because building a PC is the total best.

Over the last couple of weeks, I've finished building and fine-tuning a new gaming PC. It has been a rewarding, maddening, exciting, terrifying, and ultimately enjoyable experience. 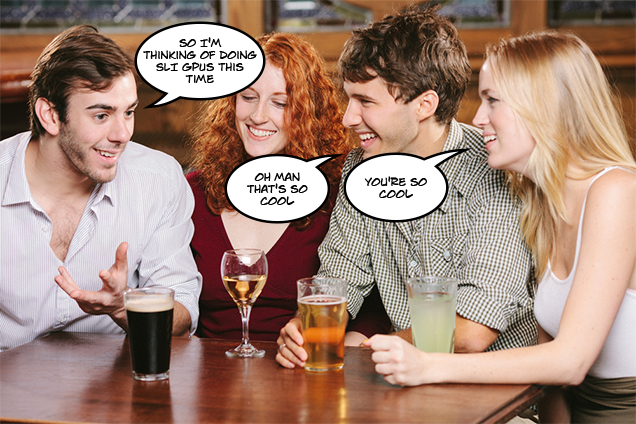 It's fun to tell people you're building a new PC.

You get to sound like you're some hot-rodding, customising know-it-all who builds his own things all the time. Yeah, I build my own PCs. I also grind my own coffee beans, and when the downstairs bathroom doorknob falls off, I fix it myself. 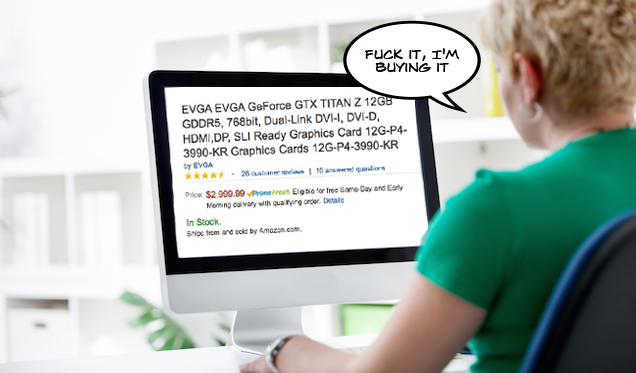 2. Talking yourself into getting the more expensive part.

It's usually a good idea to start out by setting a budget. Maybe you want to keep it under £800. Maybe under £1000. You'll probably go and find some online PC builder's guide that tells you just what parts to order so you can get the most bang for your buck.

Then, you'll look at the graphics card you're buying…and weigh it against the next better model…which, yes, costs like £100 more… but oh look it gets like 20 more fps in Far Cry 3... hmm…oh fuck it, let's get the better one. And hey, that SSD is on sale…maybe we can get that, too…

You'll eventually wind up getting a PC that's kind of like the one listed on that PC builder's guide, but with a few better parts, for a bit more money. Once you've started pressing the Confirm Order button, it gets a lot easier to press it for other, better things.

But hey: It's your PC. Get what you want.

There is perhaps no more lonely feeling than sitting in a room with a half-built PC in front of you, counting up motherboard mounting screws and wondering if you have enough. But these days, thanks to YouTube, it's almost impossible to truly feel alone while building a PC.

This is "Paul." He works for Newegg. While I was building my new PC, he became my best friend. I'm serious: This three-part series is so damned good, and he is so good in it.

His soft Midwestern (Missouri?) accent, the way he makes fun of his own "hot mess" of cables before saying that don't worry, his generally chill demeanour: All of it reminds you that things will be fine. We'll handle it. Paul is here.

When Paul didn't have the answers I was looking for, I had so many other YouTube friends: This super friendly guy from Tech Upload who talked me through installing my Evo 212 CPU cooler, these two young people from Cooler Master who explained how to use the hard drive cages on my Cooler Master case, this guy who demonstrated how to apply thermal paste and even made a joke about how to do it in the most metal way possible:

In the darkest hours of PC building, there's nothing better than hearing an actual human voice telling you: It's okay. You can do this. I've done this. Here, let me tell some jokes and show you how to do it.

4. Diving into the ridiculous abundance of online PC-building resources.

Good lord, online PC-building resources have gotten good in the last ten years. There are now far more resources available than anyone could ever need. Fortunately, you can kinda just boil it down to four or so places: Tom's Hardware, PC Part Picker, Overclock.net and Lifehacker.

(Okay, okay, yes, Lifehacker is our sister site and I like everyone who works there. I'm biased. Still, they're great.)

If you have a question about anything, I'm not even kidding, literally anything, there will be six threads dedicated to it on Tom's Hardware. Want to know a safe operating temperature for your GTX 770? Tom's Hardware. If for some reason you can't find what you're looking for at Tom's, you will find it at Overclock.net. I'm convinced that those two sites contain more combined knowledge about PC customization than anywhere else on the face of the earth.

If you want a comprehensive guide to how to, say, overclock your GPU or CPU, or if you're just curious how much overclocking can really help your PC, Lifehacker is the place to go. And if you're wondering whether that more-expensive CPU you want will still work in the motherboard you have ordered, PC Part Picker can tell you in an instant.

5. Locking the tension arm on your CPU.

There are a few crucial Moments of Truth when building a PC, and installing the CPU is one of the first and more crucial. Oh, the feelings of relief and excitement that follow dropping the CPU into place and locking the tension arm.

It always takes a little more pressure than you thought it would, and there's always that one moment when you think, "Oh shit, oh shit, I'm about to squish my CPU." But then you lock the arm in place, and everything's all good, and your motherboard has a brain.

Generally speaking, it's fun to plug things into your motherboard.

I like to think that they call it RAM because you kinda have to ram it in there. (Okay, be gentle, but you know what I mean.) There's usually a moment of terror when I first open up the arms in the RAM cradle, check that I'm putting it in right-side up, and start to push down. Will it seat correctly? Am I scratching something? Is this going to work at all?

Then it slides in, the arms pop up, and you're home free.

Wow, it's hard to talk about motherboard installation without sounding like you're talking about sex. Maybe it's just me.

7. The moment when you press the power button and everything works.

Eventually its time to plug in the power supply, connect some peripherals, and press the "power" button.

There's a click, and a whirr…the light on the front of the case lights up, the logo on the side of your GPU illuminates, and all of your fans start spinning.

Because I am an impatient maniac, I don't do a test boot before putting everything in the case. So, I'm never sure if everything works until I fire it up for real. There are always so many small things that can happen to foul things up—those damnable tiny front-panel connectors almost always do me in—but when it works, when everything starts spinning and whirring and lighting up…there's no feeling quite like it.

The downside of The Cloud™'s popularity is that it has become an annoying cultural touchstone. The upside is that The Cloud™ has actually reached a point where it often (usually? sometimes?) works as advertised and can be genuinely useful.

This is rarely more true than when building a new gaming PC. There was a time where installing Windows to a new hard drive meant spending an hour or two backing up your shit on the old one, burning CDs, saving and re-saving copies of precious Morrowind save files, knowing that, if you messed up, hundreds of hours of careful character customization would go down the drain. 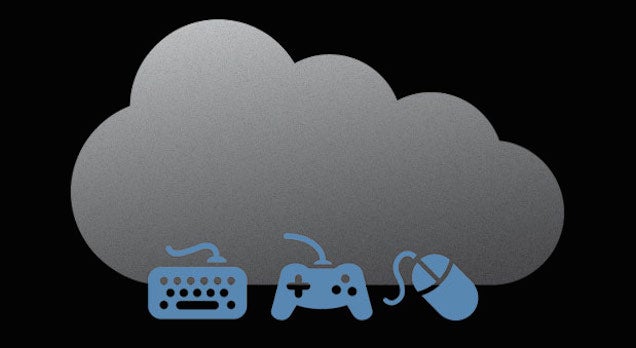 While it may be annoying how newer PC games like Starcraft II and Diablo III force you to create an account and log in to play, there is an upside: When you switch to a new PC, your entire profile, saved games, and settings will be there waiting for you. You can pull over files from your last hard drive's SteamApps directory and Steam itself will check The Cloud™ and re-download any files you missed. You can (and should) sync all of your important documents and saved games to Dropbox and they'll be a single login away from your new rig.

Setting up software on a new PC used to take a couple of hours. This time around, with Chrome, 1Password, Steam and Dropbox all syncing to The Cloud™, I got all my essential stuff up and running in about 10 minutes. A half an hour later, I'd copied over a bunch of great games.

What did I do with the time I saved? I played video games, of course.

When you own a PC, it can feel like you're stuck in a long-distance race against your own games. Sometimes you're ahead, and sometimes you're behind. Building a new PC, then, is like constructing a pair of bionic legs at a pit-stop—all at once, games that used to give you a hard time are eating your dust.

Far Cry 3 on ultra? 60fps, even during those cutscenes where Vaas gets up in your face. Max Payne 3? Fuhgettaboutit, locked 60, max settings at 2560x1600. Head-trauma has never looked so clear. The Witcher 2? Give me a break! Crysis 3? Oh yeah baby, maximum settings. That game isn't even very good and I'll still play it for an hour or two just to marvel at how amazing all the dudes' faces look.

Crysis 3 was a frowner of a game but it’s still fun to run it maxed out on a new PC. I mean lookit this dude’s face pic.twitter.com/WEKT8oNQEj

and lookit THIS dude’s face too! Crysis 3: The Only The Best in Close-Up Dude Faces pic.twitter.com/FSqcBw3YIA

It won't be too long before a new game makes you bump texture quality down from ultra to high. So, enjoy it while it lasts.

10. When you close up the case and decide that you're finished.

You'll probably spend your first few hours of new-PC ownership with the case wide open, installing software and making sure everything runs properly. But eventually, there will come a point where you're finished.

You spend a few minutes organizing your cables behind the motherboard, tying down cords and tucking away unused connectors. You'll push the side panels on, realizing that the transparent left panel on your case is actually way cooler than you thought it would be. You'll connect all the cables to the back of your rig, and slide it into place beside your desk.

You'll press the power button one more time, sit back, and pause to observe your creation in its natural habitat. 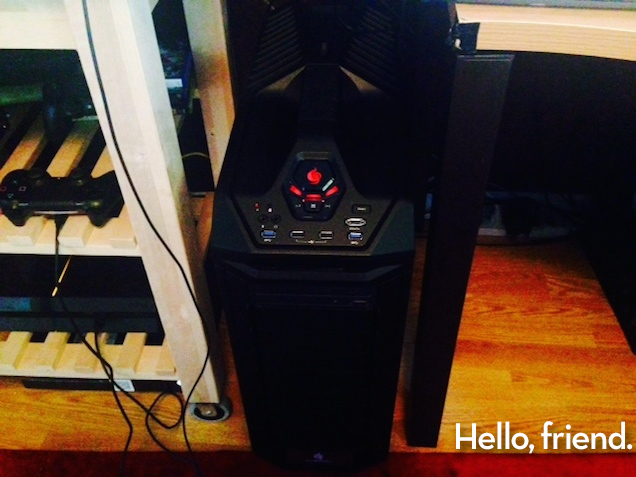 Life is good. You have a new gaming PC.