It's 2014 and DVDs are years past futuristic. But researchers at Oxford think that a metal alloy in DVDs could also be used to make thin, flexible, and low-power screens for wearables. Here's how it works.

Both the novel screens and DVDs function by exploiting the phase change properties of germanium-antimony-tellurium (GST). Shooting a laser beam at GST switches it from a disordered, amorphorous phase to a highly structure crystallised phase. That's how a DVD stores 1s and 0s. 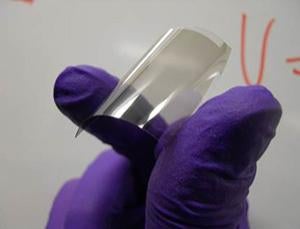 When GST is sandwiched between two layers of translucent conducive material, changing its phase also changes the colour. Varying the thickness of the layers themselves also creates different colours. For example, as New Scientist describes, "a 70-nanometre-thick sandwich switches from sky blue to navy blue, while a 180-nanometre one shifts from a vivid pink to sunset orange." Compared to our current illuminated screens, this chip also uses very little power.

So far, the researchers have etched images into this GST chips, but they haven't actually created a screen of moving images. Stacking all the layers to create a full spectrum of colour is certainly a formidable challenge. But it's fascinating to see that parts of even outdated technology could be fashioned into something cutting-edge. [Nature via New Scientist, Tech Review]