We Tried the Disposable Coffee Lid of the Future

For all our crippling caffeine addictions, the disposable coffee cup is a highly imperfect art at best. Seattle-based company Vaporpath wants to change that with a total coffee cup lid overhaul. But is the fancy new redesign
actually superior to its classic brethren? We decided to find out for ourselves. 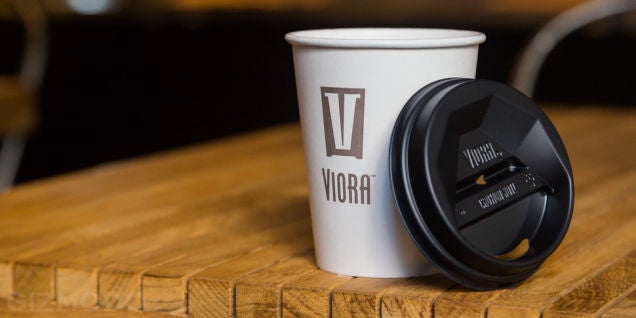 First, the claim: Vaporpath's Viora coffee lid addresses quite a few java-related issues that, until now, we've been fairly content to suffer through without much thought. Whereas typical coffee lids take on a more bowl-like shape to catch (but also keep, irritatingly) any rogue liquid, the Viora lid looks almost like a dissected funnel.

The wider mouth should in theory make it easier to control your coffee intake, while the slanted lid directs any spillage right back into the cup where it belongs. What's more, the three-times-the-size opening hypothetically gives you a much better sense of your coffee's aroma. Which, assuming you're drinking something decent, can turn what was essentially a joyless caffeine IV into a legitimately pleasant experience.

Filling our cups with some freshly brewed Hair Bender (a medium-dark roast from small-batch, Portland roaster Stumptown) we asked our resident coffee expert Michael Hession, whether or not the fairly lofty claims held up.

According to Hession, there is definitely a noticeable difference in the two drinking experiences. The Viora really is more comparable to drinking out of a ceramic mug. With a mug, the open mouth allows for a controlled intake of air along with your liquid, which is key for aeration and, consequently, key to more flavourful slurps. What's more, since 75 per cent of taste comes from your sense of smell, the former tight-lipped lid severely cheats you out of the full flavour experience. When we drank out of the Viora, though, the extra space in the opening left the aroma free to waft up into out nostrils, bringing out far more of the coffee's smokier, semi-sweet chocolate notes.

The other key improvement is temperature. With a traditional lid, you can either wait for your coffee to cool or risk a burnt mouth. The Viora, though, allowed us to suck up some air with our coffee, meaning a sip cooled before it hit our tongues. It may not necessarily be an overwhelming difference, but as the first major lid innovation in 30 years, it's definitely a welcome one.

Of course, casually sipping indoors gives you the more refined take, but how does the lid hold up when you're on the go? At a walking pace, we did notice that the coffee contained in the Viora didn't have the same tendency to come shooting straight up at the slightest stumble. In more aggressive shaking, though, neither fared too well, with the Viora lid perhaps even allowing for the greatest spill factor. So if your commute takes you over bumpy terrain, that wider mouth could be more curse than gift.

As far as drinkability goes, when we tried to drink through both lids while balancing on a bike (which is a pretty horrible idea all around), the Viora lid was definitely easier to sip out of. After all, a bigger bullseye means a better chance of hitting your mark.

Still, these are generally extreme cases, and for most people, the redesigned lid is a long-overdue improvement to something we use on a near-daily basis. The recyclable, odourless lid officially debuted just a few months ago, so it may still be some time before we see it popping up in our local coffee shops. But after 30 years of sticking with an inferior lid, another few months doesn't seem quite so bad.