Windows 9 Rumour Roundup: Everything We Think We Know

Windows 8 has been limping through its existence for just about two years now, and despite the fact that its continual updates have improved it a fair bit, the numbers aren't encouraging. Microsoft knows this, and the rumours surrounding Windows 9 show that it's going to be a move back to more familiar territory. Here's what we think might be coming.

Most of the information about Windows 9 come from a series of leaks and rumours around what's known as "Project Threshold." It's pretty much a sure thing that this is the next version of Windows; the only question is whether it's called Windows 9 or something more whimsical. Either way, we're going to call it Windows 9 from here on out because whether that's what its name is, that's what it is.

Surprise, surprise! Windows 9 is expected to be a stark reversal from Windows 8. Windows 8 updates have already blurred the lines between Modern-style apps and windowed applications, and there's another update on the horizon that will even bring back the Start Menu. Windows 9 is intended to further cleave the touch and desktop sides in twain. Or at least to give that appearance.

Windows 9 devices that identify as traditional computers will have desktop view only. At least, that's the way the shift is being pitched by leakers. The Metro-swathed Start Screen isn't exactly gone, though. Instead it will just be condensed down into the Start Menu (complete with live tiles), and the Start Menu will be optionally expandable into a full-screen view. That is to say, the Start Screen.

Sound like a big step back, but also kind of like no real change at all? That's because it's both. With a move like this, Microsoft is able to technically 'kill the Start Screen on desktop Windows,'—a phrase Windows 8 haters everywhere have been clamouring to hear. But in effect, it's really just morphing the Start Screen into a slightly different shape, and letting its full-screen version lurk in the background until touchscreen PC users realize they kind of want it. It's both a big change and also a sort of non-change that really lays bare that the Start Screen was actually just the Start Menu all along.

In more substantial changes, leaks indicate that the Charms bar is dead, and that Modern-style apps (aka Metro apps aka Windows Store apps) will run in windows on Windows 9 instead of thrusting users into a fullscreen-only app mode like Windows 8 did. Windows Phone's voice assistant Cortana is expected to be among these newly window-able apps. Windows 9 is also expected to bring virtual desktops into the mix, a feature that's been living on OSX and Linux for ages. 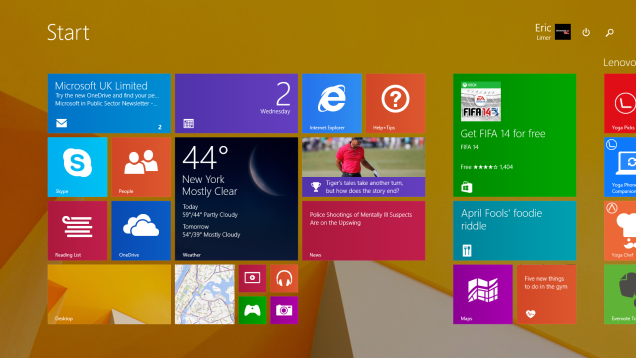 The Windows 9 version of RT will apparently strip out the (frankly pretty useless and kind of misleading) Windows RT desktop and include a Windows Phone 8.1-esque Notification Center, basically turning Windows RT into a Metro-only tablet-first operating system that straddles the line between desktops and phones by offering a more traditional (read: Android-like/iOS-like) tablet experience, instead of trying to shoehorn a fake desktop in there.

This mobile version of Windows 9 would of course be limited to running only Marketplace apps—much like Windows Phone and Windows RT today—but with Universal Windows Apps on the way, and the ability for desktop users to run these apps in windows, the Microsoft App store might be in for some more of the app diversity it still needs.

Of course this all points toward one very obvious end-game that may happen with Windows 9, or at the very least shortly after: Windows RT will finally merge with Windows Phone. Not only has this possibility been mentioned in leaks, it just also makes sense considering that OEMs have all but given up on making Windows RT tablets in favour of full Windows tablets. Meanwhile Windows Phones are creeping up on tablet size, and the unceremoniously axed Surface Mini would have called a lot of attention to this awkward dichotomy, which might have contributed to its cancellation

Cheap! Maybe even free, depending on what you're running right now. Leaks from MYCE have suggested that the cost to upgrade from Windows 8.1 to 9 could be anywhere from free to $20 (£12-£13). Meanwhile Microsoft is said to offer a vague but "awesome" incentive to get people off the dead and dying Windows XP.

That "awesome" offer was seemingly revealed by an Indonesian Microsoft executive, who suggested that Windows 8 users would get the upgrade to Windows 9 for free. "The Windows 9 upgrade will be available free of charge to all existing Windows 8 users once it's released", said Andreas Diantoro.

Other users (like folks on Windows 7) may have to pay a bit more though. Unlike Google and Apple who have operating systems but make money on ads and hardware (respectively), Microsoft still relies on Windows to bring in a lot of its money. That said, Microsoft has a big incentive to just get Windows 8 over with already.

All signs so far point to a release sometime in spring of 2015, though rumours about when it will rear its head as an official announcement have been a bit more varied. The first rumours of Windows 9 started before Windows 8 was even out, with more appearing in January of this year, citing a spring 2015 release window, but also predicting a Windows 9 shout-out at Microsoft's big BUILD developer conference in April.

Microsoft did not in fact speak Windows 9's name as predicted, but rumours of that spring 2015 commercial release have persisted, joined now by consistent and pretty diversely-sourced whisperings that Windows 9's reveal will instead come on or around September 30th, with preview versions available to developers immediately.

But aside from just the rumours, a prompt release just makes sense, considering the direction that CEO Satya Nadella has been steering Microsoft. It takes a while to reverse course on a freighter, sure, but in less than a year Nadella's already shaken off the "devices and services" ethos Microsoft picked up when the Surface launched, axed a 8-inch Surface RT device that was pretty much finished, and oversaw that complete admission of defeat that is the return of the Start Menu.

Windows 8 was a mess, its architects have been scattered to the wind, and the new captain of Microsoft has a reputation for making changes and fixing shit. A Windows 9 overhaul—and soon—only makes sense.

Update: Microsoft has now sent out invites for an event on September 30th, the promises to reveal "what's next for Windows and enterprise." Obviously this is Windows 9, and most likely the release of a very early developer version known as the "Technical Preview" in Microsoft's terms. The president of Microsoft France even accidentally confirmed that this event is about Windows 9, after which PR clarified that whatever is coming isn't necessarily called Windows 9. Regardless, a tech preview of a new version of Windows is almost certainly on the way. When the real version will hit after that is still unknown, but we'll know very soon.