Soldiers Describe How DARPA Smartphones Save Lives in Battle

The average pedestrian walks around with more sophisticated navigation and communication technology in his pocket than our soldiers have on the battlefield. That's why the military is working hard on developing a battle-ready smartphone that would bring our troops up to speed. According to the soldiers who've tested the Pentagon's prototypes, the tech can't come soon enough.

For the past couple months I've been exploring DARPA's effort to develop a smartphone. Or more specifically, the agency's efforts to develop software to power a smartphone, as it's decided to use consumer off-the-shelf devices like the Samsung Galaxy line instead of building its own hardware—though the military is very excited to get its hands on Google's modular phone.

I recently spoke to two combat veterans who'd actually used the new device while deployed in Afghanistan. The extent to which even the simplest innovations helped to save lives blew my mind.

Doran Michels, programme manager for DARPA's Transformative Apps programme, was not shy about how the sad state of maps in the military when I first met him. "It's really strange because in 2014, if you were to accompany, let's say, a Marine patrol on a really scary, highly complex mission," Michels told me on a visit to DARPA in July, "they're going to have paper maps, pencils, acetate, transparencies with magic markers [for] 'John Madden drawings.'"

In other words, our most advanced military operations are using the same navigation technology as they were during World War II. If soldiers have to cross a stream and the maps get wet they'd be destroyed in no time, leaving the troops with little more than a compass.

So it's no surprise that one of the first applications DARPA developed was a dead simple maps app. It works a lot like the Google Maps app on your smartphone, but its functions could amount to life or death for a soldier in battle. 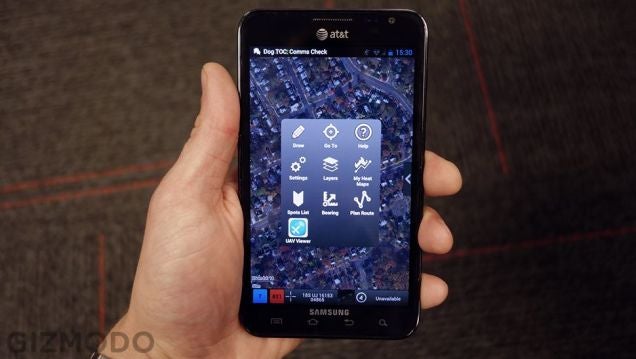 A recent version of the TransApp maps suite running on a Samsung Galaxy Note.

The maps app has become rather feature-rich, but when the first DARPA phones started appearing on the battlefield three or four years ago the simple fact that the device could show updated satellite imagery was a huge deal for troops trying to navigate the terrain in Afghanistan. "
Some of those paper maps over in Afghanistan are from the 90s, early 2000s," U.S. Army Captain Chris Gage explained to me in an interview. "I mean they're ancient."

Not only are the maps on DARPA phones updated, they're also dynamic so that you can load new maps on the fly, a feature that's been key to soldiers doing combat search and rescue. On his second deployment in 2013 and 2014, Gage's unit would sometimes travel upwards of 100 miles on single missions, often in unpredictable directions. He told me they would have needed "thousands of maps around in order to be able to pull up … some sort of imagery." The DARPA phone puts all of those maps in the palm of soldiers' hands.

DARPA's maps app started out as a very basic tool. But in recent years, the TransApp developers have built on layers of functionality that give soldiers capabilities they've never had before. Back in 2009, the world learned about an ingenious hack for vehicles with onboard GPS units. A few lines of code would record where that vehicle had driven so the unit could avoid the same route in the future, since the enemy would often plant improvised explosive devices (IEDs) along those routes. The Marines called them "honesty traces."

TransApp developers created an almost identical programme but for troops on the ground. Much in the same way that a San Francisco woman recently used her Nike+ to draw pictures of, um, things on maps of city streets, these new honesty traces use the GPS in their smartphones to trace soldiers' routes. A similar but newer app called TransHeat actually records how much time soldiers spend in a specific area, so that they get an alert when the zone is too hot and they need to move on before attracting the enemy.

Most importantly, the TransApp suite makes it easy for soldiers to share all of this information in real time. They can all be looking at the same, continuously updated map and learn from past experiences. The smartphones simplify the process of creating so-called "continuity books," which help troops keep tabs on safe routes and persons of interest.

A screenshot of the TransHeat app, where the red zones are to be avoided.

"If you do not pass over these details like continuity books, that's when soldiers are going to get hurt," Army Capt. John Meyer said in an interview, "because a brand-new unit is going to come in and they think they're going to drive or walk down areas which the former unit knew was a hot spot. The Taliban, like most of our enemies, are historic fighters. They like to use similar areas over and over again for ambushes and setting IEDs."

But again, leveraging data can combat this problem. More recent versions of the military maps app gives soldiers the ability to drop pins on the location of known IEDs so that their buddies can get a warning if they get close to danger. Think of it like an amber alert, only for battlefield hazards.

As I've reported before, one of the most exciting aspects of DARPA's TransApp smartphone programme is the simple fact that it's not only building new technology but also a new kind of workflow for innovation in the military. Soldiers participating in the TransApp demos in recent years could request specific functionality for new apps, and DARPA would see to it that these apps got developed.

One example of this is Tactigram, a simple photo annotation tool that Meyer's unit requested. The app basically lets soldiers take photos and quickly add cutout captions to identify specific people or vehicles in the image. They can then pass off the new intelligence to the rest of the unit over radio frequencies.

A screenshot of the IM chat feature overlaid onto the maps app.

Speaking of radios, even the most basic types of data transfer were a major innovation on the battlefield. Did you know that most soldiers can't even text each other? The need for security makes it difficult to set up robust cellular data networks like what civilians use, but the troops can now exchange small amounts of data over wave relay radios or cryptic radios connected to a TransApp phone. This is enough bandwidth for basic image sharing and chat functions.

Again, it's a simple innovation, but it's an important one.

The future of this technology is exciting. DARPA's funding runs out at the end of this year, at which point TransApp will be integrated into the Army's Nett Warrior programme. In the meantime, impressive applications continue to be built.

Take the Glideline High Altitude Jump, for instance. The TransApp platform is sophisticated enough now that the military can upload mission data on the fly, even if the soldiers on that mission are jumping out of a plane. "We do high-altitude, high-opening jumping, so you can upload navigation maps when you exit the aircraft at 10,000 feet at nighttime. It can make it very difficult navigating in an unlit environment [like a] desert," Meyer told me. "This phone—this app—allows you to navigate from your exit point to your actual drop zone."

That's right. These smartphones help troops steer themselves through the air, thousands of feet above the ground, in pitch black, and find their way to safety. Think: turn-by-turn directions for a paratrooper. That's incredible.

Both Meyer and Gage were both quick to say how TransApp technology saves lives on the battlefield. "I think as we continue partnering with [DARPA] this type of tech advance only makes soldiers safer and builds us as a more lethal organisation," Meyer told me.

Gage went on to explain that the military smartphone is not necessarily a tool for offensive manoeuvres, though. "If we're getting attacked," he said, "I'm probably going to put that device down and I'm going to focus on controlling forces and moving around the enemy and trying to neutralise that." He added, "We did not use this device for targeting. We use this device for battlefield awareness."

The basic navigation and information-sharing technology that most civilians take for granted on a daily basis could mean the difference between life and death for our young troops overseas. The only question now is, why don't more soldiers have smartphones?