We may not be in a total surveillance state yet, but thanks to the FBI's insane new facial recognition system, a 1984-esque reality doesn't seem quite so far away. Fortunately, scientists and designers alike are hard at work building counter surveillance solutions to ease (and hide) our worried minds.

Some are complex, others wildly simple, but all of them manage to stick it to Big Brother in one way or another. Here are some of the most interesting solutions to our soon-to-be surveillance problem. Tinfoil hats excluded.

Designed by, Japan's National Institute of Informatics, these relatively(-ish?) discreet specs keep you hidden from inquiring video cameras by essentially covering your face with a curtain of near-infrared light. So even though the glow will be mostly invisible to the naked eye, the 11 LEDs can still confuse facial recognition systems by messing with the nose and eye shadows it would otherwise lock onto. You can actually make something similar yourself as well.

Of course, not all cameras are affected by infrared, so the more dedicated tinfoil hatters amongst us will need to think bigger.

If rendering the cameras ineffective doesn't do it for you, you might as well go straight the source: Your face. No, that's not a botched plastic surgery option you're looking at(although, you know, also an option), it's creator Leo Selvaggio's face in the form of a 3D-printed resin mask. So any time you do get picked up by facial tracking software, it won't technically be you they're picking up.

Artist Adam Harvey seems to have come to terms with the fact that a total surveillance state may very well be in our future, and he's already designing the fashion to match. The anti-drone hoodie (as well as the matching scarf) are, as the name suggests, meant to trick the thermal imaging tech common to UAVs.

The metalised material also comes with a signal-attenuating phone pouch, blocking any prying ears from intercepting your data. Plus, it means no one can call you either. Everyone wins.

Another one of Adam Harvey's paranoia-soothing ventures, CV Dazzale (i.e. computer vision dazzle) takes its cues from the World War-era camo paint meant to hide ships on the open seas. In this case, though, the hair and makeup stylings turn you into something more akin to a Picasso than a warship. Black and white (the most effective colours at confusing shadows) smudges on your cheeks trick cameras into seeing too many eyes, cheekbones, etc., and hanging hair is meant to cover at least one other major facial landmark. Just don't expect to be quite as inconspicuous off camera as you are on. 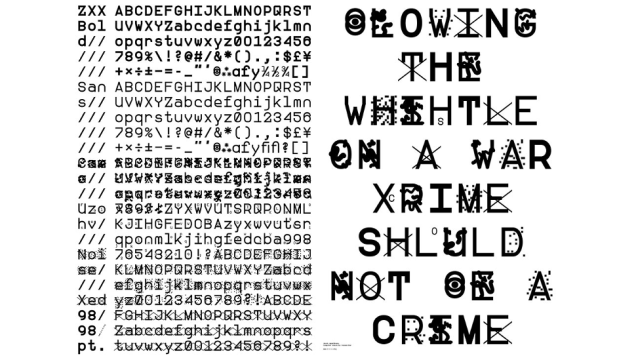 Terrified at the thought that the NSA/hackers/absolutely anyone at all could be swiping your thoughts with text-scanning software? Then you're going to love ZXX, a free-to-download typeface meant to confuse curious computers beyond repair. The font actually comes in six different styles (Sans, Bold, Camo, False, Noise, and Xed), and each is supposed to hinder computer readability in its own special way.

Of course, any sufficiently advanced computer won't have too hard a time eventually decrypting your words, but hey—whatever helps you sleep at night.