Facebook Messenger has a friend-to-friend payment feature in the works, and it seems to have already been set up in the app. It's just not turned on for the general public.

The payment feature would let you give and receive money by providing Facebook with debit card information, similar to Square Cash. 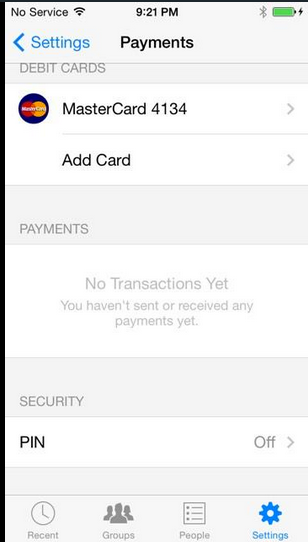 "I first found it a month ago with Jonathan Zdziarski's security research into Facebook Messenger," he told me. Aude went digging after seeing a screenshot from Zdziarski hinting at mobile payments. What he found was a full-fledged app just waiting to be made public.

Facebook recently brought ex-PayPal president David Marcus on board as the head of Messenger, so this makes sense. Aude didn't see PayPal as an option when he played around with the app, but the code he saw mentions PayPal.

The version Aude saw didn't allow for credit cards or bank accounts, and it let you add a pin code for added security. Unlike Venmo, the money-transfer app that will be Facebook's competition, the transactions were private (so no Newsfeed updates when you get that £20 for picking up a friend's concert ticket). Aude told me Facebook can turn the feature on or off on a user-to-user basis, and he suspects some Facebook employees already have access to a live version.

I've emailed Facebook asking for more details about this test and will update if they write back. There's always a chance Facebook could kill the entire project before it sees the light of day, so don't get too psyched about sending people money along with a Pusheen sticker just yet. [TechCrunch]