By Jordan Kushins on at

We originally touched on this earlier, but the story has escalated quite a bit in the time since. Last night an Antares rocket carrying over 5,000 lbs (about 2,268) of supplies to the International Space Station exploded right after launch at the Orbital Sciences Corp.'s launch complex on Wallops Island. All ground personnel is safe. NASA says that none of the supplies were urgently needed at the ISS.

At the NASA press conference, Orbital's Frank Culbertson confirmed what you've probably already seen on the video: There was "disassembly" of the launch vehicle, followed a few seconds later by the range safety officer giving the self-destruct command to the rocket. That's standard procedure for a rocket that's going off-course: rather than potentially having a giant, out-of-control rocket packed with fuel crashing down into a populated area, NASA will send a signal to explode the vehicle, known as a 'destructive abort.'NASA also confirmed that the International Space Station isn't in any jeopardy because of the failure of this particular launch: they've got enough consumables on board to last through until March next year, and there's a SpaceX launch planned for next month that can bring up anything more urgent.The official NASA statement basically says the same as the press conference.

It was to be Orbital Science Corporation's third contracted resupply mission to the International Space Station—seen here in stunning form last year—and the control team is currently following contingency procedures to assess what went wrong on the ground at the Mid-Atlantic Regional Spaceport in Wallops Island, Virginia.

In addition to over 5,000 lbs of materials for what was a planned monthlong attachment to the ISS—full cargo manifesto below—Antares was also carrying the first payload from Planetary Resources. The fledgling asteroid mining company (formerly Arkyd Astronautics) raised $1.5 million (£936,991) last year on Kickstarter to construct and dispatch the first publicly controlled orbiting space telescope. According to Popular Mechanics, Antares was carrying 32 CubeSats—or mini research satellites—one of which was the Arkyd 3 (A3) from Planetary Resources, which was to act as a kind of prototype for future developments.

YouTube user Brad Panovich captured the malfunction (please be aware, even though no one was hurt it's upsetting to see).

This is genuinely terrifying and not for the faint of heart: 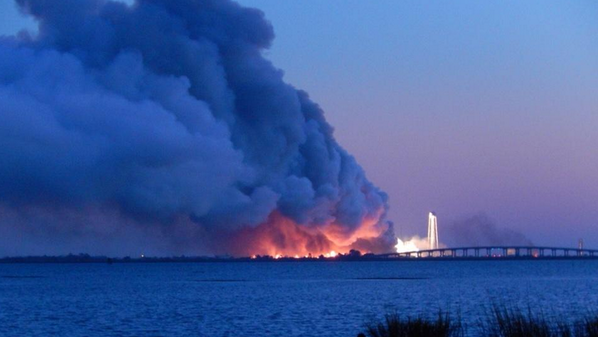 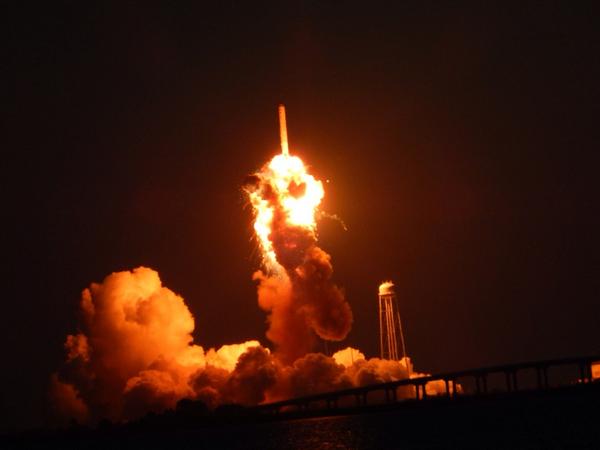 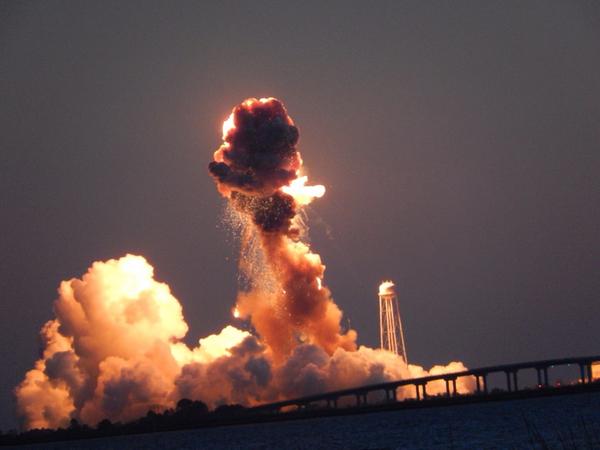 While Slate's Bad Astronomer Phil Plait has some additional insights on what potentially went so wrong (with the major caveat that official info is still scarce at this time:

As launch expert Jonathan McDowell notes, the first stage is built by the Ukranian company Yuzhnoe and uses Aerojet AJ-26 engines which are Russian NK-33 engines. These are very old engines (built in the 1960s and 70s) that are refurbished. While it's not known if these were the cause of the explosion, I suspect they'll be very carefully scrutinised in the investigation. A recent test of one engine ended in failure.

In a somewhat unbelievable twist, this was actually the second attempt for this particular mission. The launch was scheduled for yesterday, but a wayward "boat downrange in the hazard area" was cause enough to postpone. Thank goodness that no one was anywhere near the hazard area tonight.

Here is the full cargo manifest from NASA (via SpaceFlightInsider):

Orbital has now released a statement that confirms the "catastrophic failure," and claims that "property damage was limited to the south end of Wallops Island." A newly formed anomaly investigation board will be following up to figure out what happened and how to make sure it doesn't happen again.