Venice? Sure, it's sinking. So is Mexico City, Bangkok, and Ho Chi Minh City. But none of them are being submerged as fast as Jakarta, which is sinking as much as a few inches a year — for comparison's sake, Venice is sinking bytwo millimetres every year. Now, Jakarta is undertaking a three-decade-long plan to save its coastline.

It's not just rising tides that are to blame for Jakarta's plunge. It's the fact that the city has pumped its water out of deep underground wells for years — leaving empty chasms that are now sinking, according to a CityLab story from 2013. The stakes in the race against the rising tides are high: Millions of people are at risk right now, and the horrible floods of 2007 left 500,000 people homeless and caused hundreds of thousands to suffer food- and water-related illnesses.

The ambitious plan to save it, unveiled last week, is extreme. It calls for thirty years of work, at a price of £24 billion (at least), and would create 17 new islands as well as a five-mile-long wall, creating a reservoir to catch floodwaters between this new archipelago and the existing city. The government calls it "The Great Garuda", a reference to the sweeping wing shape of the ring of artificial islands, which are akin to the mythical avian Garuda—which also happens to be the country's national symbol, as well as the name of its national airline.

Behind this enormous infrastructural effort is an agreement between Indonesia and perhaps the most flood-endangered nation: The Netherlands. Holland, which has its own expansive plans to mitigate rising sea levels, is cooperating with the Indonesian government to design and carry out the 30-year masterplan as part of a joint nation-to-nation project. The shape of the islands, for example, is being planned by the 100-year-old Dutch firm KuiperCompagnons, which consults to cities around the world also dealing with flood mitigation. The masterplan is being developed by Dutch company Witteveen+Bos.

If it sounds odd that a group of Dutch companies are spearheading an effort to rebuilt the coastline of an Indonesian city, it won't for long. The Netherlands has pioneered flood planning for centuries, but only over the past decade have they begun exporting their expertise, thanks to the rising tides that are suddenly threatening dozens of cities outside of their tiny low-lying country.

The plan to save Jakarta is actually based on the nine-year project to save Holland's own coastline, called Room for the River. The multi-billion project will wrap up next year, and is based on a very simple, but very paradoxical, idea. To survive a flood, you have to allow water into areas where you might not want it. In other words. you have to provide places for all that water to go — both during the flood and as the water recedes—rather than relying on a single, massive wall or similar idea. 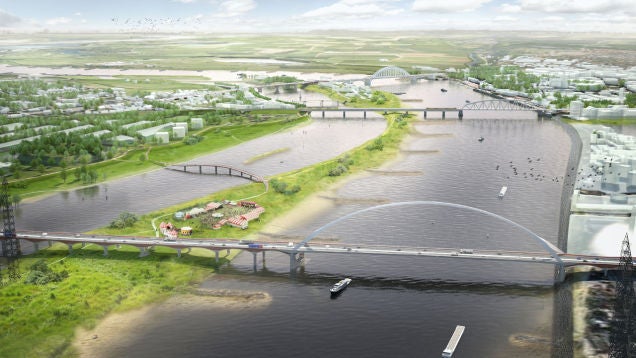 In the Netherlands, that meant creating hundreds of unique infrastructural systems that can handle being inundated, from marshlands to berms to channels. In Jakarta, it will mean several things. First, creating a wall roughly four miles from the coastline to slow storm surges.

Second, the creation of a massive dam surrounding the city's coastline made up of 17 artificial islands, described as "one of the world's largest hydraulic engineering projects", that will enclose the city and create a protective reservoir. The plan will take decades—as Witteveen+Bos point out, "supplying enough soil would require more dredging vessels than are currently available in the entire world", which Indonesia doesn't really have, but few other options exist.

It's early days, but this is a project to keep a close eye on. In the end, it could become a model (or warning) for how low-lying cities should invest in infrastructure to save themselves as the waters rise.