Last month at IFA, we heard that Sony's new waterproof line of flagship devices, the Z3, Z3 Compact, Z3 Tablet Compact would all be able to stream video games via the PS4. Now, a Sony slip details that the last generation Z2 and Z2 Tablet may also get the added gaming ability. 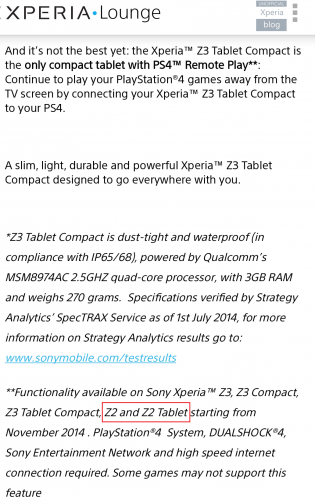 Spotted by XperiaBlog, the slip up comes from Sony's own Xperia Lounge app that offers different discounts on games and music as well as giveaways and price cuts on its own hardware. In the app, Sony mentions a few more devices than expected to support the gaming feature when it launches in November. XperiaBlog says this added feature will most likely be apart of the Z2's rumoured Android 4.4.4 update that is coming soon.

It would make sense for Sony to also bring this function to the Z2 considering the smartphone is only 6 months old, and not much different from the new Z3. In order to take full advantage of PS4 Remote Play, you'll need the GCM10 mount, a DualShock 4 controller, and obviously the console itself since all the computing takes places over wi-fi on the PS4's more capable hardware.

We got some brief hands-on time with the feature during Sony's Z3v launch earlier this month, and the controls are incredibly fluid and more comfortable than Sony's own PSVita. Hopefully deeper integration with PlayStation will make these admittedly awesome smartphones more appealing to the growing gaming populace. [XperiaBlog]