Chaos Ensues as Armoured Truck Spills £2.88 Million Into the Streets of Hong Kong

Dozens of Hong Kong motorists and pedestrians rushed to grab handfuls of the money after an armoured truck's doors accidentally opened on a busy road, spilling about £2.88 million in HK$500 notes (that's notes roughly valued £41 each) on Christmas Eve, reports the South China Morning Post. Check out all those frantic bastards.

Police has asked the people of Wan Chai, Hong Kong, to return the money, but the people of Wan Chai are all like, "huh, wut? No way, man." But the police is like, "hell no, man, that's not cool at all. Give us the moneys!" They have already arrested two taxi passengers—a 43-year-old man and a 36-year-old woman. So far, the police have been able to find HK$5.69 million (£470,802) on the road and elsewhere, says the South China Morning Post:

We found the money stored under the bed at their homes and they admitted they took the money on Gloucester after getting off the taxi they were in. 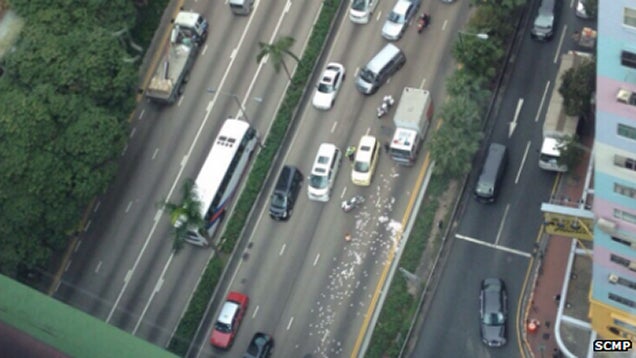