These Mysterious Ice Pancakes Have Taken Over a Scottish River

Weird things happen in the cold of winter. At the River Dee in Scotland, that weirdness includes dozens of recently discovered "ice pancakes" floating on the river surface. Their strange shapes boggle the imagination, but rest assured, there's a explanation for their existence.

The River Dee Trust, which first posted the photos online, suggests eddies (swirling flows of water) in the river are likely responsible for the ice's shape. As freezing foam swirled in the eddies, they formed into little disks. And all that jostling around on top of the river creates the raised edges. The pancakes may have grown over several days, with freeze-thaw cycles each day and night accounting for the tree-like rings. 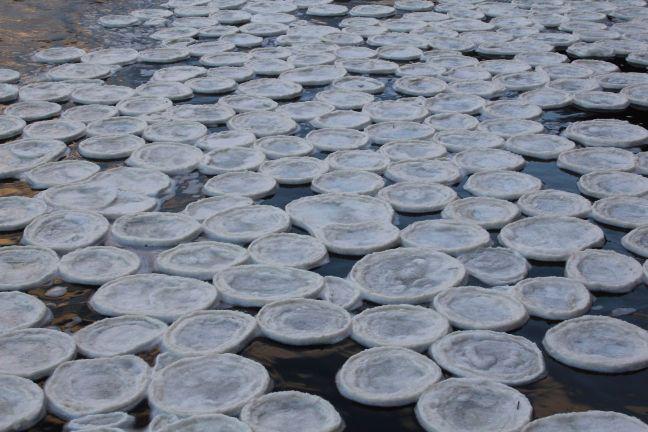 We found these recently on the Lummels Pool at Birse do you know what they are? Find out here http://t.co/xgxiq6dY6Q pic.twitter.com/zYlXb1R2fy

These ice pancakes have also been found in Antarctica and in the American Great Lakes, when the conditions are just right. (The video below shows ice pancakes jostling in a Great Lakes tributary.) Ted Scambos, a lead scientist at the National Snow and Ice Data Center told National Geographic, however, that it's rare to see ice pancakes solid enough to be picked up. More often, they're just delicate slush gently floating on the surface.

River Dee's, on the other hand, is like a garden of icy lily pads summoned by the cold. [The River Dee, National Geographic via Geekologie]