3D TV is Dead. Let's Hope Smart TV is Next

Two or three years ago at CES, this post probably would've been about some 3D TV equipped with dorky glasses, maybe a smart set that's more like a rusty Swiss army knife for home entertainment. This year, things are different. 3D is now a spectre of CES past. With any luck, smart TVs are next on the chopping block.

CES 2015 is the year of 4K. TV makers have finally ditched the gimmicks and are simply pumping out big, beautiful televisions that produce big, beautiful images. We're back to TV 101: Make the picture better and make it affordable. This is good! But where LG, Samsung, Sharp, Sony, and others excel at all that quantum dot, pixel splitting, colour gamut stuff, their "smart" TV software sucks. It's so bad in fact, that we're actually shocked when we see a new TV OS that isn't terrible. 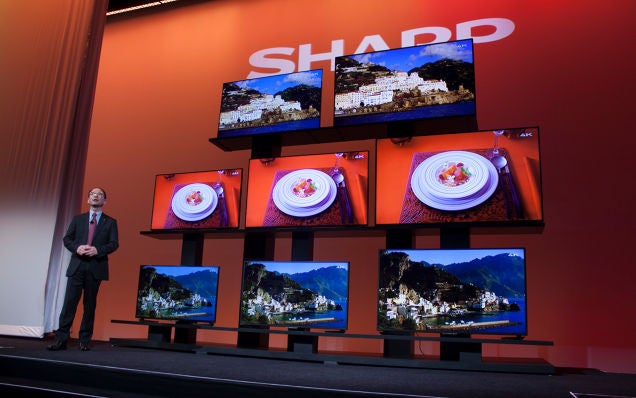 Some companies have see the light this year. Sharp and Sony are giving up the ghost and letting Google's Android TV be the brains for their brawny LED bodies. Panasonic is adding Firefox OS to its 4K lineup. That's great! Google knows software. Mozilla too. Sharp and Panasonic don't. So let's find some s y n e r g y.

And honestly, why not take it even further? Android TV might be better than Tizen or webOS or whatever other janky TV software people are rolling out right now, but all still feel like just a middle ground. Recent research shows that people who do connect their TVs to the internet hardly use internet-based features at all. Meanwhile, more than 25 per cent of homes should have a streaming device about nowish, and a large percentage of hold-outs are never-adopters who wouldn't even want a smart TV anyway. All this software posturing from these mega corps are made redundant with a £35 dongle.

The best 4K TV you can buy is still just a dumb one—with lots and lots of HDMI ports. Because of the way streaming entertainment has evolved, any television can become a "smart" television if you want it to. It's called Chromecast, or Fire TV, or Fire Stick, or Nexus Player, or Apple TV, or PS4, or Xbox One, and on and on.

You can gain the TV smarts of your choosing for as little as £35, and more importantly, you can just add it on to any TV you desire. Even TV providers offer live broadcast streaming, so the case for big, beautiful dumb TVs is even stronger. Just give me a dumb TV, with a great screen, at a great price. I can take care of the rest.

It's especially important because software and hardware lifecycles, especially concerning televisions, don't really sync. Software is an annual, or even semi-annual affair, but you might not buy a new TV for years, and years, and years. So what happens when all these separate televisions with all their walled gardens and different OSes fail to keep up, or get left behind entirely?

The word "dumb" isn't a pejorative with televisions. In fact, even without any software, all these sets at CES are very, very, smart, with technology inside that squeezes out every possible inch of performance on their LED or OLED displays. Add the fact that you're paying a premium for this pre-loaded software, and buying a smart TV becomes even less appetizing. I'd rather put that money towards a Roku.

But I have hope. If the television industry as a collective whole can realize the futility of one stupid 3D TV gimmick, maybe at CES 2016, they'll right the ship even more.