All the Faces of Ultron: The Design Evolution of the Avengers' Archenemy

There is an outstanding illustration of the new Ultron the latest cover of Empire magazine, seen in the image above. I remember how fascinated I was the first time I saw Ultron in Avengers. It was issue #162, published in 1977 — I saw it much later because it arrived to Spain in the '80s. Here's how artists changed Ultron's appearance through the years:

This is the very first Ultron design, created by John Buscema in 1968. It was pretty stupid looking—like Windows 1.0.

Keep in mind that this was not Ultron's original design during its first introduction to the public. The awkward Ultron was shown in a flashback that told its origins, when he called his creator — Dr. Hank Pym — "daddy".

This is John Buscema's original design for Ultron, first shown to the public in a now classic saga — from Avengers 54 to Avengers 58 — in 1968. 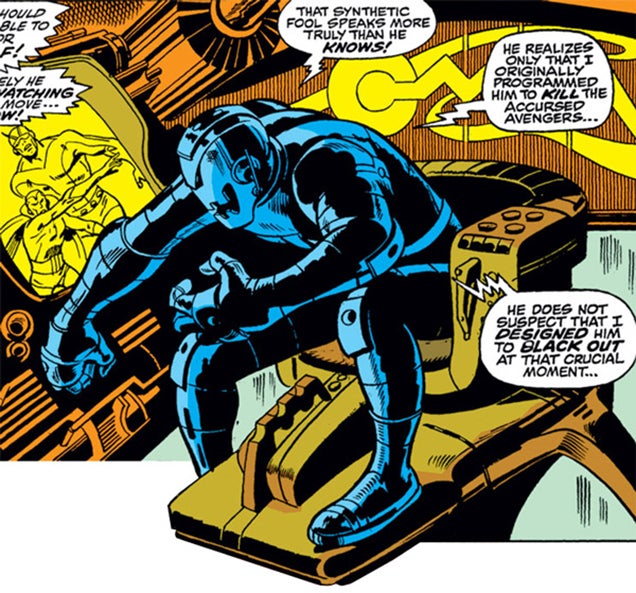 Before that moment of revelation, however, Ultron kept himself under wraps as Crimson Cowl:

In that saga Ultron created Vision, an android that was programmed to destroy the Avengers but ultimately joined them.

The genius Barry Windsor-Smith — back when his style was a clone of Jack Kirby's — kept Ultron almost pure for his next incarnation in 1969. You can see the change in his eyes and nostrils in relation to the rest of the face—plus a simpler body now fully made of indestructible adamantium.

Ultron got a human-like makeover from John Romita Jr. in 1974: 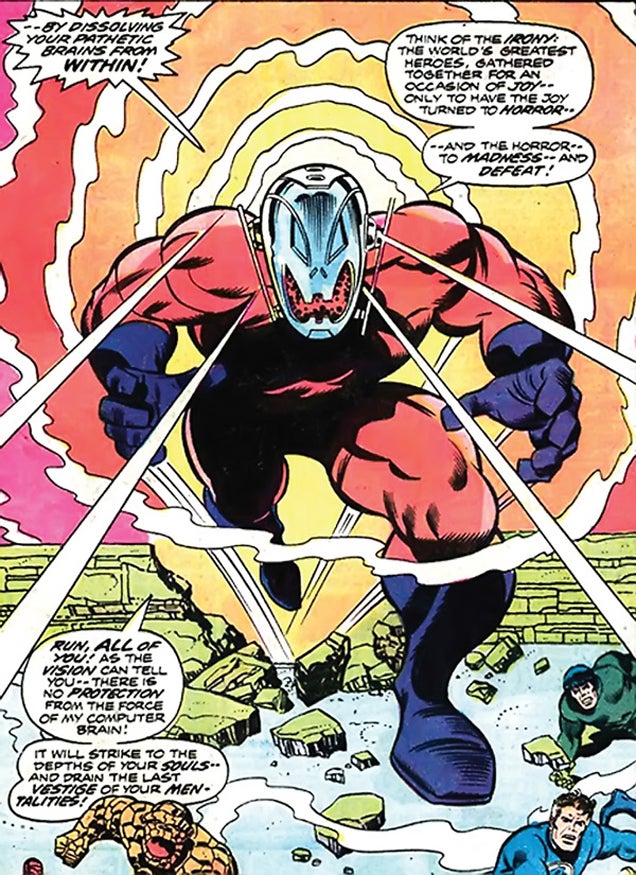 George Perez — one of the classic Ultron illustrators — went back to the original classic all-metal design in 1977, introducing some minor modifications to his armour. It was then when Ultron became one of the main super villains in the Marvel Universe, with the Bride of Ultron saga that introduced his bride Jocasta — who later became part of the Avengers too. This is the first Ultron comic I ever read: 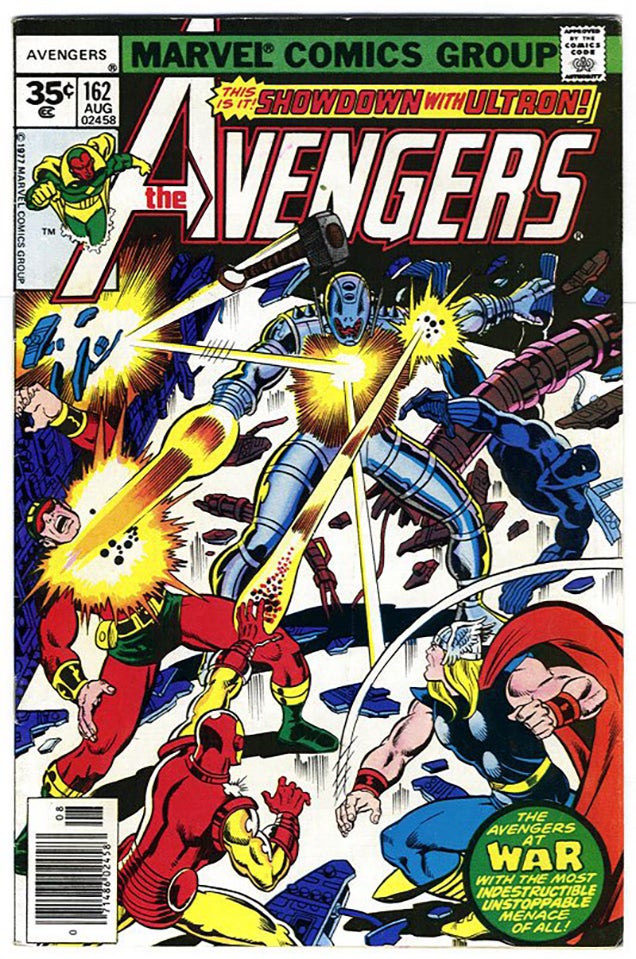 Like an iPhone model ending in s, the new Ultron 9 by George Perez didn't get any external redesign in 1980.

Ron Wilson brought us this silly-looking revision with closer tiny eyes and a different mouth design in 1982. 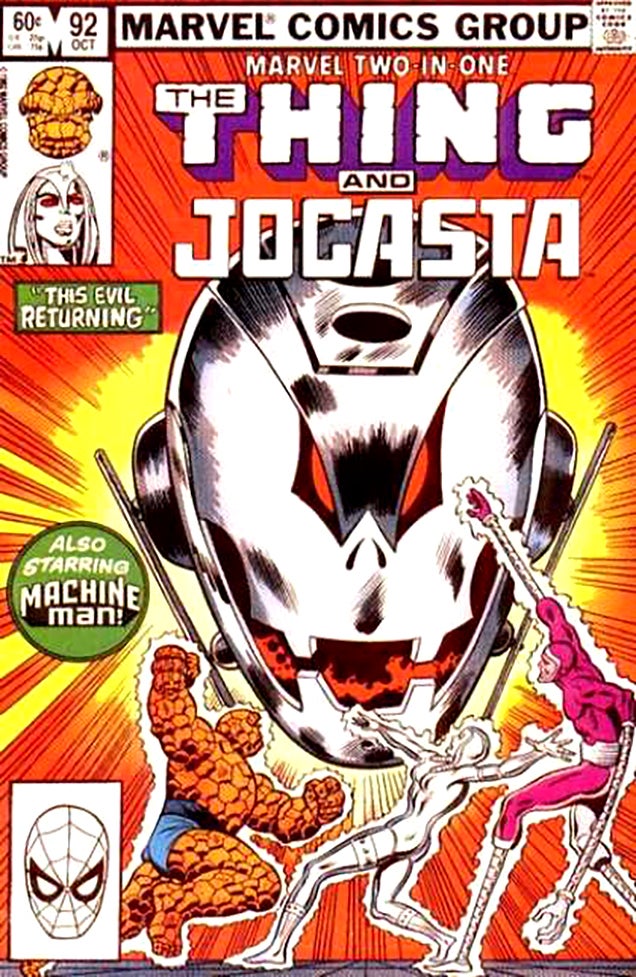 Mike Zeck and Bob Layton brought us a simplified Ultron for Secret Wars in 1984, much more stylized on the pages drawn by Zeck.

Things get really awkward when Ultron-12 tries to become a loving son for Hank Pym in West Coast Avengers. The design — by Bob Hall — keeps more or less the same. "Still so threatening," in the words of Ultron's daddy.

Which sadly became bastardised by Paul Ryan in West Coast Avengers in 1991. 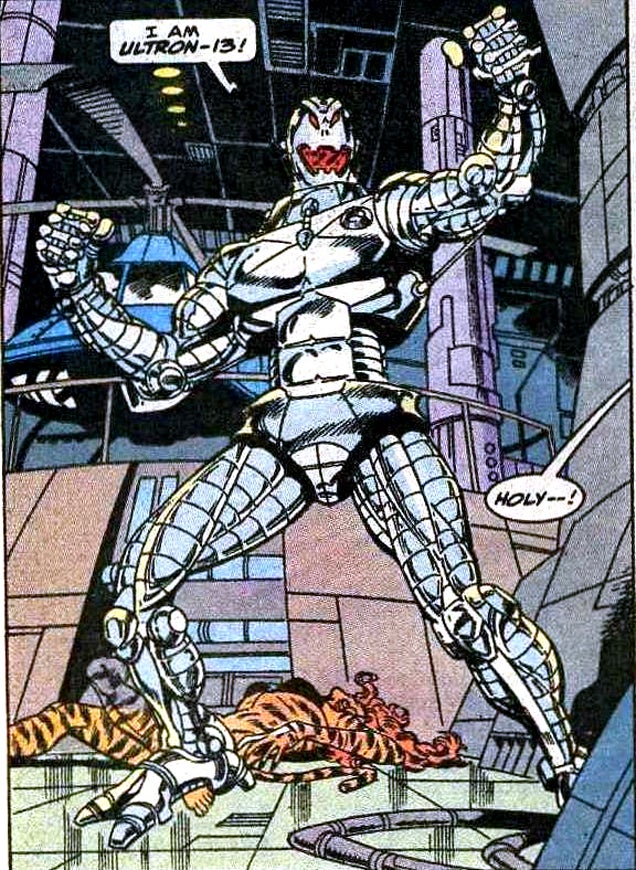 And further modified (for the best) in Spider-Man Annual 25 by Guang Yap in September 1991.

Things go back to weird and wonderful when penciler David Ross comes up with this Japan version of Ultron for West Coast Avengers 89 in 1992.

George Perez comes up with another (many, in fact) Ultron in the Ultron Unlimited saga in 1999. His design of Ultron-15 reminds me a bit of the Terminator.

At this stage things get pretty freaking crazy with slight variations in design by Perez (which probably went made after drawing all these Ultrons). Here's Ultron-17, Ultron-23 and Ultron-458.

It wasn't until much later, in 2007, when we get the first radical redesign of Ultron. And radical it certainly was: a female Ultron by Frank Cho. Gone are the hard angles. In are the curves of Ultron's mommy: Janet van Dyne aka Wasp.

Designed by Tom Raney for Annihilation: Conquest, this almost omnipotent version of Ultron harnesses the power of the Phalanx — a techno-organic species — to take over the entire Universe.

And finally, the Ultron model previous to the new movie redesign, designed by Bryan Hitch.