NASA has had some truly bad luck lately, underscored by the cancellation of an ambitious balloon mission due to a leak last week. Even Opportunity, the decade-old Mars rover that has surprised everyone by exploring for more than a decade after its mission ended, is showing signs of slowing down. Now, NASA has a plan to hack it.

Oppy, as NASA calls its ageing rover on Twitter, arrived on Mars 11 years ago, in January of 2004. It was only supposed to function for a few months—90 sol, in Martian days, which are slightly longer than Earth days. But Oppy kept roving, surprising everyone, for more than a decade after its planned lifespan.

But the ravages of age spare no one, not even 181 kilo metal robots. This summer, NASA gently reported that Oppy was suffering from what it described as "amnesia." The rover's flash memory is starting to wear out after so much use—so entirely on its own,Oppy started bypassing its flash memory and saving its data to another type of memory, RAM, which doesn't retain information if the system is powered off. That means that Oppy is saving its data, going to sleep, and then waking up without any memory of the tasks it has completed. Over Christmas, Oppy stopped talking altogether—and then, finally, responded.

But how do you fix a robot that's 125 million miles away? And using hardware that was designed decades ago? Well, Discovery News reports that NASA is in the process of "hacking" Oppy's software from afar. The plan is to trick the rover into thinking its flash memory only has six banks instead of seven—bypassing the single fault memory bank that's causing Oppy to shift over to its forgetful RAM memory.

"It's like you have an ageing parent, that is otherwise in good health - maybe they go for a little jog every day, play tennis each day - but you never know, they could have a massive stroke right in the middle of the night," Nasa project manager John Callas told Discovery News. "So we're always cautious that something could happen."

It's pretty amazing that NASA can write software on Earth and send it, via relayed satellite, to Mars—where an 11-year-old machine will receive it, implement it, and hopefully, continue on its journey across the red planet. If it works, it'll be an omen for great things to come this year. [Discovery News]

As mwhite66 pointed out the last time we wrote about Oppy, this is obligatory: 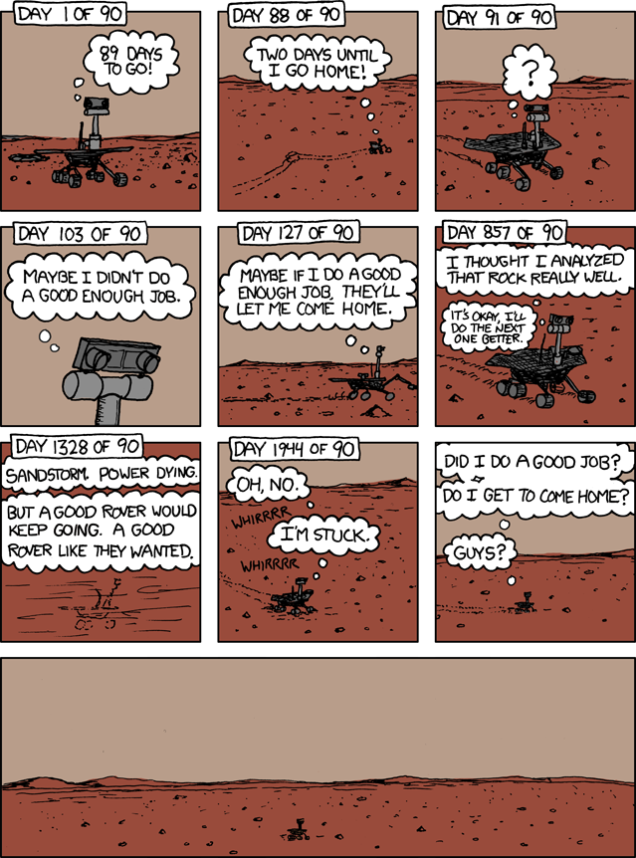