The Forgotten Plan to Save Great Art From World War III

A secret treasure trove below a memorial in Washington DC. A retrofitted quarry in Wales. A frozen bunker in Svalbard. Our governments have gone to great lengths to protect precious objects from ruin, and a new trove of declassified documents shine light on a new, little-known project to do just that during the Cold War.

Paranoia and fear wracked the western world during the Cold War, and we got a new glimpse at just how seriously UK government took the Soviet threat during the 1980s this week, when the National Archives declassified Cold War documents that detail the plan to protect the country's masterpieces if nuclear war broke out.

It wasn't the first time the idea had been floated. During the Cuban Missile Crisis of 1962, the British government created something called Operation Methodical to hide its greatest treasures at Manod Quarry in Wales, where art had been stored in World War II:

Art being stored at Manod quarry during WWII. Getty/Fred Ramage.

Here's how The Guardian explained what would happen should the bomb drop:

There would be just six hours to save the nation's art treasures. The order was to be given at midday, the troops and museum staff would be deployed and then the lorries would begin arriving. Hours later, in darkness so as not to provoke panic, the Titians and the Turners and the Tintorettos would be on their way to Welsh quarries. When the ballistic missiles incinerated British cities, they at least would survive - though there may have been no one left to view them.

Obviously, that never happened. But by the early 1980s, the possibility of nuclear war was back; this time, it was the museums who were asking for help. The idea was to store the works in two specially outfitted rooms in formerly top secret government facility beneath North Wales, at Rhydymwyn, where mustard gas shells had once been stored.

So which paintings made the cut? During the Cuban Missile Crisis, planning documents cited by Hyperallergic included mention of the amazing 14th-century painting, the Wilton Diptych:

But the list also included modern works, like Vincent Van Gogh's masterpiece Sunflowers, painted in 1888 and stored at the National Gallery:

As well as a 1916 Water-Lilies, by Monet, also at the National Gallery:

According to Bloomberg, it was an utterly disorganised and panicked project, and it ultimately never happened. But it's still a glimpse into the seriousness with which western governments took the possibility of nuclear war, and it shows just how completely unprepared anyone was to make moral decisions about what to save—more specifically, what to save instead of human lives.

The UK wasn't alone in worrying. During World War II, the American government sent groups of historians and curators to Europe to salvage and protect the remains of great works of art (George Clooney even made a film of it). 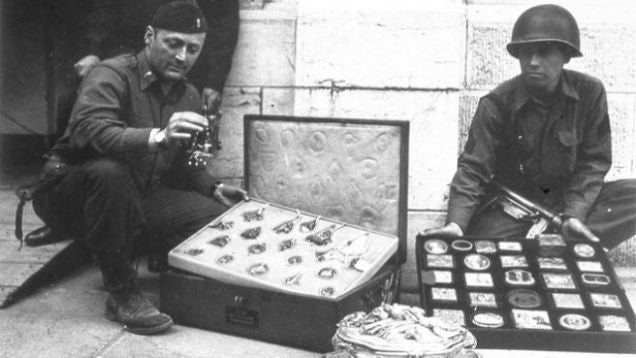 Amazingly, there was even a secret plan to store America's own cultural artefacts during World War II.

A researcher at the Smithsonian Institute recently unearthed incredible evidence of a project to build a secret and gigantic "treasure trove" to store art and other treasures in DC — beneath a memorial to Supreme Court Justice Oliver Wendell Holmes that was being built at the time.

US government never approved the project (at as much as $5 million in 1941, it was probably too expensive), but it's worth noting that the government did move many artefacts out of DC after the bombing at Pearl Harbor. Better safe than sorry, as Brian Daniels explains in his post:

The Library of Congress sent the Declaration of Independence, the Constitution, the Articles of Confederation, a Gutenberg Bible, and, at the request of the British, one of the surviving copies of the Magna Carta to Fort Knox on December 26, 1941. A few days later, on January 1, 1942, the National Gallery of Art moved seventy-nine masterpieces to Biltmore House in North Carolina. The Smithsonian took some time to find a secure site, but finally found a remote hideaway in Shenandoah National Park, and began moving treasured objects like the Star Spangled Banner in late 1942.

Contemporary governments are planning for the next great conflict too: just a few years ago, a vault filled with hundreds of thousands of seeds was installed in the remote Arctic island of Svalbard. Should a global catastrophe ever befall the world's agricultural production, the seeds are there to help regrow the Earth's flora. The great unknown, as with any of these projects, is whether they would do the survivors much good.

These are just a couple of examples of projects that were never built. But odds are good that there were versions of these plans that actually made it through to completion. Let's hope we never have to use them.