The Mercedes Luxury in Motion is not a car that you'll be able to find on on AutoTrader any time soon. It's not bound for any motorways or driveways in the near future. It is, though, a glimpse at the future of automotive transportation. And a bloody good-looking one at that.

One key to how the F 015 (the less poetic name) operates? Outsized LEDs, on the front and rear, that communicate whether the car is in autonomous mode or under the driver's control. If you don't trust the machines (you shouldn't), change lanes when you see blue. If you're driving behind the F 015 the LEDs may also tell you to STOP or SLOW, which seems a little presumptuous, but what is any discussion of the future if not presumption?

While the interior of the car has autonomous features as well, including seats that swivel so that the front and back rows can face each other, play backgammon, or whatever. They also swing towards the door when it opens, so that you can gently tumble your way out of its embrace instead of the strenuous act of turning your own body and standing up. The doors are "saloon doors": They open as might the doors of an Old West saloon.

It's similar to a concept a company called Regus introduced last spring, but I prefer this similar vision, from the 1950s, dug up by Paleofuture (and invoked by Mercedes in its presentation): 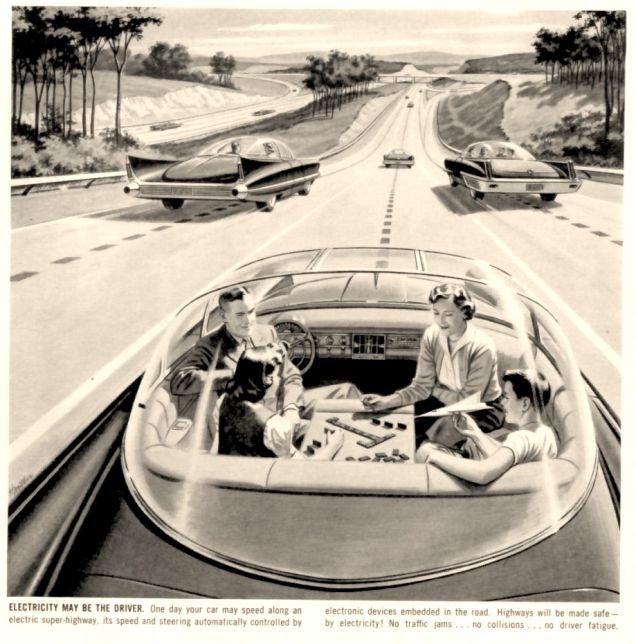 Not the new Mercedes car.

Want more future? There's more future! There is nothing but future in the Mercedes F 105. Display screens grace not just the front panel but the side panels as well, and are controlled not just by the tap-tap-tappings of a caveman but by gestures and eye-tracking. It will know your movements more intimately than might your spouse.

It seems a little odd to talk materials in a car that won't exist any time soon, but the F 015 incorporates carbon fibre-reinforced plastic, steel, and aluminium to the end of making it nearly half the weight of the cars rolling off today's assembly lines.

The F 015 is not just svelte. The car of the future is smart, as well. It has "Extended Sense," which knows its location down to the millimetre and can identify its owner from their smartphone. It has a heads-up display that can show street numbers, which restaurants have tables available, how many tickets are left for that night's show at a theater you're driving past.

The swivel chairs of the future, seen through the lens of a weird Mercedes robot assistant.

And what is the future without THE CLOUD? The F 015 knows the cloud well, it is intimate with the cloud, it speaks fluent cloud to you. Want to control navigation? Do it from your PC before you leave. Want to set the temperature before you get in? Do it from your phone. This may be my favourite bit of connectivity, though:

A specially developed app offers further control options even when away from the vehicle, using a mobile device. The F 015 can therefore be sent off to search for its own parking space, or perhaps to a specific location to collect the user or other occupants.

To reiterate: The Mercedes F 015 can literally park itself. Or could, if it were ever going to be a real car, which again it is not! But let that not stop us. Let us move forward.

The Mercedes F 015 can go 1,100km on a single charge, which is 683 miles, which would get you from London to Edinburgh and back (as the crow flies). It does this (or would do this were it to exist) thanks to an F-Cell plug-in hybrid system that Mercedes first debuted in 2011.

What fun they're having!

It's easy to be cynical about visions of the future this far-reaching, and probably healthy to a degree. But it's also important to remember that not all of this is fluff; much of the F 015 will show up in some version, some day, in some car.

We may never play gin rummy with our backseat passenger, but fuel cell concepts like the one Mercedes has here will help us drive farther and more efficiently. We may never have a car that drives off and park itself, but we're already seeing cars that park on our behalf when we need them to.

So here's to the F 015. If we live up to even half of its promise, we'll be in a much better vehicular place than we could even have dreamed up just a few years ago.