Why are So Many Tech Products Aimed at Women So Offensively Dumb?

The women in the photo above are modelling a smart bracelet. It looks good! It's also a glorified beeper that costs around £300. This is the state of lady-tech (ew) today.

Many of the products designed explicitly with women in mind are condescending misfires that pander to a stereotypical concept of women that's tired, out of touch, and often just insulting.

Instead of creating gender-specific products that would actually be helpful (still waiting for a period tracker in the HealthKit, Apple!) too many companies just slap some sparkles on the regular version of their device and call it a demographic win. We already know that tech companies are historically terrible at marketing to women. The female-friendly products they roll out are no better.

Even when products like the Burch/Fitbit partnership work out successfully, there's still a glitter-eyed myopia in addressing gender and technology. It's sadly rare that a female-oriented tech product will offer a value-add for women beyond upping the bling factor. Function should be valued as much as form.

Here are some of the latest offenders.

This prototype, featured at Panasonic's booth at CES this year, will point out the flaws on your face. They have a dude testing it but you know this shit is aimed at the Evil Queen who trembles insecurely within us all (it also shows you how you'd look in different types of makeup). The mirror points out problems like large pores and recommends Panasonic products that can fix them. It will update you on your progress each week to let you know if you got less ugly.

It doesn't yet appear to recommend eating the heart of the most beautiful young girl in the kingdom but maybe we'll have to wait for the consumer version.

I initially thought the whole look-it's-a-purse-but-WAIT-it's-a-speaker! thing was fun until I realized that you can barely fit anything into Stelle's line of speaker purses and they cost £299.

These speakers actually look like reasonably fashionable clutches, but they're not cheap enough to be a fun novelty prank and they...do not function as clutches. This means the person holding this will have no place to put all the stuff they'd normally put in a clutch. I can't imagine anyone would be keen to not wear a purse so they could wear this instead. I guess you could wear two purses, one a real, functional bag, another a speaker, but then you'd look like a dork with bad decision-making skills.

A regular old canister of pepper spray might clash with your outfit. Here, try this rape bracelet.

I am fairly confident that no one of any gender has ever longed to let their earbuds trail down to end in a cheap-looking plastic necklace. But maybe there's someone out there willing to pay £132 for this affront to common sense.

Misfit makes some solid fitness wearables, but the most cringe-inducing trend in lady-tech is to just make a sparkled-out version of something that already exists. Whether this is your taste or reminds you of fancy old ladies engaging in a gin-soaked war of the wits in Boca Raton, as a fitness band For Women, it's ostentatious and unnecessary. 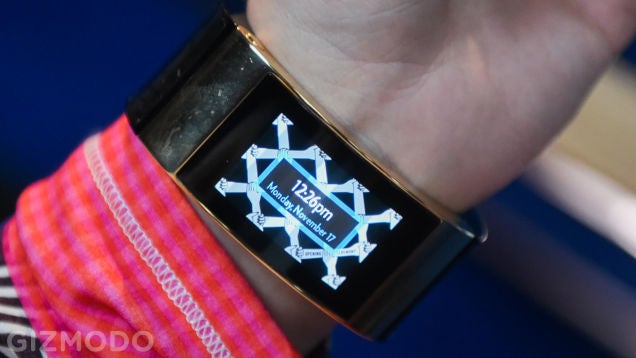 This collaboration between Intel and Opening Ceremony is actually kind of cute from a bracelet standpoint. But from a smart wearable standpoint, it's crap. You can't get messages to your phone rerouted to it. In fact, it doesn't connect to your phone at all.

Instead, it gives you a whole new phone number to give people so they can text the bracelet. If you want to respond to one of those texts, you have to choose among canned responses, because it has no keyboard. Not sure how this can bill itself as an intelligent communication accessory if it only lets you communicate by selecting something someone else wrote. "My Not Very Useful But Admittedly Quite Pretty Canned Response Accessory" is more apt.