6 Supermaterials That Could Change Our World

Graphene isn't the only game-changing material to come out of a lab. From aerogels nearly as light as air to metamaterials that manipulate light, here are six supermaterials that have the potential to transform the world of the future.

The human body is very good at fixing itself. The built environment is not. Scott White at the University of Illinois at Urbana Champlain has been engineering bioinspired plastics that can self-heal. Last year, White's lab created a new polymer that oozes to repair a visible hole. The polymer is embedded with a vascular system of liquids that when broken and combined, clot just like blood. While other materials have been able to heal microscopic cracks, this new one repaired a hole 4 mm wide with cracks radiating all around it. Not big deal for a human skin, but a pretty big deal for plastic.

Engineers have also been envisioning concrete, asphalt, and metal that can heal themselves. (Imagine a city with no more potholes!) The rub, of course, lies in making them cheap enough to actually use, which is why the first applications for self-healing materials are most likely to be in space or in remote areas on Earth. [Science, New Scientist, CityLab]

If you've ever had a laptop burn up in your lap or touched the hot hood of car, then you've felt evidence of waste. Waste heat is the inevitable effect of running any that device that uses power. One estimate puts the amount of waste heat as two-thirds of all energy used. But what if there was a way to capture all that wasted energy? The answer to that "what if" is thermoelectric materials, which makes electricity from a temperature gradient.

Back in the lab, scientists have also been tinkering with another promising and possibly even more efficient thermoelectric material called skutterudite, which is a type of mineral that contains cobalt. Thermoelectric materials have already had niche applications—like on spacecraft—but skutterudite could get cheap and efficient enough to be wrapped around the exhaust pipes of cars or fridges or any other power-hogging machine you can think of. [Nature, MIT Technology Review, New Scientist]

Solar cells made of perovskites. Image credit: University of Oxford

The biggest hurdle in moving toward renewable energy is, as these things always are, money. Solar power is getting ever cheaper, but making a plant's worth of solar cells from crystalline silicon is still an expensive, energy-intensive process. There's an alternative material that has the solar world buzzing though, and that's perovskites.

Perovskites were first discovered over a century ago, but scientists are only just realising its potential. In 2009, solar cells made from perovskites had a solar energy conversion efficiency of a measly 3.8 per cent. In 2014, the number had leapt to 19.3 per cent. That may not seem like much compared to traditional crystalline silicon cells with efficiencies hovering around 20 per cent, but there's two other crucial points to consider: 1) perovskites have made such leaps and bounds in efficiency in just a few years that scientist think it can get even better and 2) perovskites are much, much cheaper.

Perovskites are a class of materials defined by a particular crystalline structure. They can contain any number of elements, usually lead and tin for perovskites used in solar cells. These raw materials are cheap compared to crystalline silicon, and they can be sprayed onto glass rather than meticulously assembled in clean rooms. Oxford Photovoltaics is one of the leading companies trying to commercialize perovskites, which as wonderful as they have been in the lab, still do need to hold up in the real world. [WSJ, IEEE Spectrum, Chemical & Engineering News, Nature Materials]

Aerogels look like they should not be real. Although ghostly and ethereal, they can easily withstand the heat of a blowtorch and the weight of a car. The material is almost what exactly the name implies: gels where where the liquid has been replaced entirely by air. But you can see why it's also been called "frozen smoke" or "blue smoke." The actual matrix of an aerogel can be made of any number of substances, including silica, metal oxides, and, yes, also graphene. But the fact that aerogel is actually mostly made of air means that it's an excellent insulator (see: blowtorch). Its structure also makes it incredibly strong (see: car).

Aerogels do have one fatal flaw though: brittleness, especially when made from silica. But NASA scientists have been experimenting with flexible aerogels made of polymers to use insulators for spacecraft burning through the atmosphere. Mixing other compounds into even silica-based aerogels could make them more flexible. Add that to aerogel's lightness, strength, and insulating qualities, and that's one incredible material. [New Scientist, Gizmodo]

If you've heard of metamaterials, you likely heard about it in a sentence that also mentioned "Harry Potter" and "invisibility cloak." And indeed, metamaterials, whose nanostructures are design to scatter light in specific ways, could possibly one day be used to render objects invisible—though it still probably wouldn't be as magical as Harry Potter's invisibility cloak.

That could be, for example, new T-ray scanners in medicine or security or a compact radio antennae made of metamaterials whose properties change on the fly. Metamaterials are at the promising but frustrating cusp where the theoretical possibilities are endless, but commercialisation is still a long, hard road. [Nature, Discover Magazine] 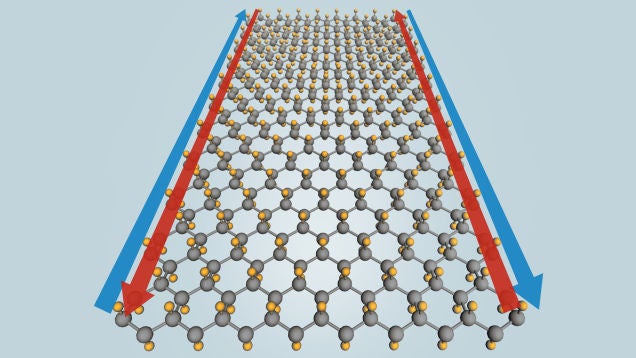 Like the much better known graphene, stanene is also made of a single layer of atoms. But instead of carbon, stanene is made of tin, and this makes all the difference in allowing stanene to possibly do what even wondermaterial extraordinaire graphene cannot: conduct electricity with 100 per cent efficiency.

Stanene was first theorized in 2013 by Stanford professor Shoucheng Zhang, whose lab specialises in, along other things, predicting the electronic properties of materials like stanene. According to their models, stanene is a topological insulator, which means its edges are a conductor and its inside is an insulator. (Think of a chocolate-covered ice cream bar. Chocolate conductor, ice cream insulator.)

This means stanene could conduct electricity with zero resistance even, crucially, at room temperature. Stanene's properties have yet to been tested experimentally—making a single-atom sheet tin is no easy task—but several of Zhang's predictions about other topological insulators have proven correct.

If the predictions about stanene bear out, it could revolutionize the microchips inside all your devices. Namely, the chips could get a lot more powerful. Silicon chips are limited by the heat created by electrons zipping around—work 'em too fast and they'll simply get too hot. Stanene, which conducts electricity 100 per cent efficiency, would have no such problem. [SLAC, Physical Review Letters, Scientific American]