What are Capacitors and Will They Really Charge Your Phone in Seconds?

Your phone died. Again. In these scenarios, who among us has not dreamed the dream of a future where our devices charge instantly and last forever. As capacitors—or even more exciting, ultracapacitors—get better and better at storing energy, they could replace batteries and realise at least one half of that dream.

Understanding these two difference processes is key to understanding why capacitors can work where batteries fail. So let's delve a little deeper into how energy gets stored in an electric field.

At its simplest, a capacitor is two metal plates (conductors) with a layer of ceramic, glass, or plastic (insulator) sandwiched in the middle. Electrons accumulate on one of the plates, so one side is negatively charged and the other positively charged. When electrons are allowed to flow from one side to another, you get electricity from the capacitor.

Lithium-ion batteries, on the other hand, have to rely on a chemical reaction to release energy that is then extracted into a electric circuit. Capacitors don't require that extra step, which is why they can discharge and charge much more quickly. Another advantage of skipping the chemical reaction that capacitors don't degrade over a few hundred charging cycles like your laptop battery has the unfortunate habit of doing.

Capacitors do have one big disadvantage, though, which is that they store only a small fraction of energy compared to a battery of the same size. That's were ultracapacitors come in.

Okay, so what's an ultracapacitor?

Now, the name ultracapacitor implies it's clearly better, but how it works is a bit more complicated. Bear with us. The metal plates of an ultracapacitor are coated in a spongy form of carbon—carbon nanotubes or graphene are ideal because they are so thin. The whole thing is when immersed in electrolyte, a liquid with lots of ions floating around in it.

When an ultracapacitor is charged, the positive ions are attracted to the negative electrode and vice versa. Remember that charges in a capacitor are separated by an insulator layer. In an ultracapacitor, the distances between charges is on the order of ten thousand times smaller. Since the size of the electric field is inversely related to the distance between charges, the ultracapacitor has a lot more storage capacity. Also, the porousness of the carbon means there's a lot more surface area for ions to cling to. (For more detailed technical explanation on ultracapacitors, Gigaom has got you covered.)

Eventually, scientists hope to make ultracapacitors that have energy density comparable to batteries—but we aren't there yet.

The turtle and the hare

The relative strengths and weakness of the two devices are summed up nicely by Santiago Miret of the Berkeley Energy and Resources Collaborative, who compares them to the turtle and the hare.

So what's a good example of a machine well-suited to run on capacitors? The city bus. By design, buses have to stop every few blocks, which is of course frustrating when you're stuck behind one. But buses outfitted with ultracapacitors can also quickly charge at each stop, eliminating the need for overhead wires or heavy batteries.

Ultracapacitors on a bus can also be charged through regenerative breaking, the way a Prius's battery is charged. Sinautec Automobile Technologies has made hybrid buses that use ultracapacitors to do exactly that.

Capacitors could play a major role in the future of renewable energy. Wind and solar power tend to generate energy in short bursts that don't always correspond to when people use the most electricity (usually afternoons, especially in the summer). Sometimes, wind and solar can generate so much electricity when not needed that sellers actually pay buyers to take the extra power—the price of electricity essentially becomes negative. On the flip side, we also have to keep coal and gas plants around to pick up the slack if renewables aren't generating enough energy to keep up with demand. The solution to both problems is, theoretically, obvious: storage. And that's where capacitors come in.

There are even crazier ideas for capacitors out there. The devices are so different from batteries that they kind of explode our conventional ideas for what energy storage can be. For example, capacitors are bulky, remember? Well, scientists last year created a superstrong capacitor that could one day be used in walls to turn an entire house into an electricity-storing device.

But that also brings us back to why phones and other little gadgets are not the most exciting application for ultracapacitors. These phones might charge up in seconds, but they still might last only a day, which is the more annoying limitation.

There is one place where ultracapacitors has the potential to really break barriers though: the electric car.

Can batteries and capacitors work together?

The electric car company Tesla is currently building its gigantic battery factory out in the desert, making a massive bet on the battery technology that would make a fleet of electric cars possible. But CEO Elon Musk has also acknowledged the transformational power of capacitors—once the technology gets there. 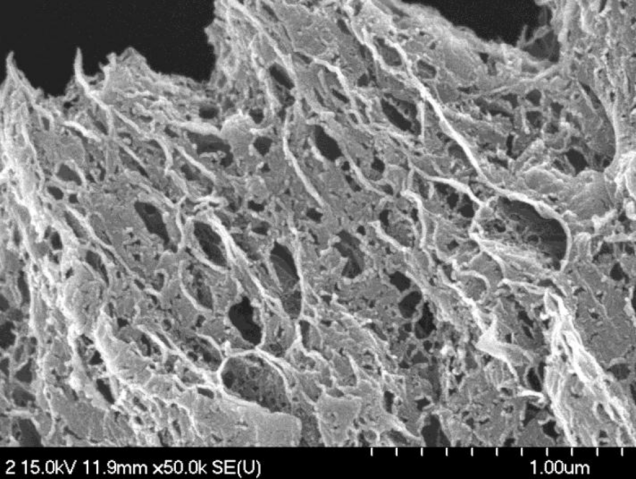 The porousness of a graphene supercapacitor. Credit: Kannappan et al

In 2013, South Korean researchers announced they made graphene-based supercapacitors with an energy density that almost reached that of lithium-ion batteries. This was greeted with a lot of excitement, but there's still a stickler: No one has figured out how to mass produce graphene cheaply. Lithium-ion batteries may be heavy and imperfect, but they're still the most practical thing for electric cars we've currently got.

But the solution isn't necessary batteries or capacitors but both. The turtle and the hare have different strengths that actually complement one another. Acceleration saps a lot of power. If an electric car could accelerate using capacitors, which also discharge quickly, its battery could be smaller and lighter, thereby increasing the range of the car. Toyota's hybrid racecar, the TS040, actually employs a similar strategy, using a supercapacitor to add 480 horsepower.

Ultracapacitors that far surpass batteries in every respect could someday power our cars—and maybe even our phones, whatever they look like in the far-off future. Ultracapacitor technology is still young. But more practically, in the short-term future, batteries and capacitors both have roles to play—not as rivals but as complements.