HTC Vive: Virtual Reality That's So Damn Real I Can't Even Handle It

I saw the future today. I mean that. I got the chance here at MWC to try the new VR headset Valve and HTC are developing. Is it good? It's absolutely incredible. This thing is just...my god you guys I can't even.

What this headset nails—and I mean fucking nails—is a sense of presence. A sense that you're not just seeing a different world, but that your actual body is being transported there. Strap on the Vive and you are somewhere else. I slapped at fish in a shipwreck, walked like a giant through a battlefield, cooked in a virtual kitchen, and it felt so unbelievably real.

With the original Oculus Rift and things like Samsung Gear VR, that sensation of really being somewhere else is present, but fleeting. Those can't track your body, so as soon as you lean just slightly, the illusion is shattered. The Oculus Rift DK2 did it better, with a motion tracking camera that at least let you lean, but you were still a sort of an armless half-body. Sony's Project Morpheus improved it further by using controllers keep track of your hands.

But the Vive? It's like nothing that's ever come before.

HTC and Valve pulled this sensory illusion off in two ways. First, there's positional tracking. The HTC Vive uses two sensors you need to hang on the wall at a 90 degree angle. These track you pretty much wherever you are or whatever you do. Crouch, jump, lean, turn your head, tilt, look up, down, left, right, and the system will be able to keep tabs on exactly where you are based on the position of your head. 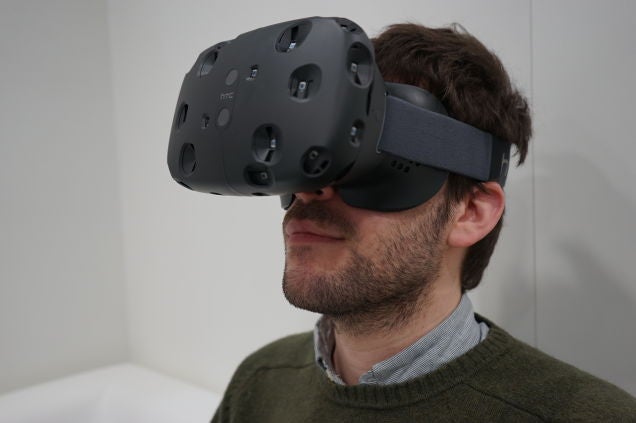 That's only solves half of the problem though. The tracking system still can't see your arms or hands, which is where controller comes in. There are two of them, one for each hand. We weren't allowed to take pictures of them, but they look a lot like the nunchuk controllers for the Nintendo Wii, but instead of a joystick on top, each one has a touchpad like the ones on the original Steam controller. On the back, there's a trigger on the back for your pointer finger. These very simple controllers are your two "virtual" hands.

It's the combination of these two things that make the whole experience click into something mind-blowing and incredibly immersive. The most immersive thing I've ever tried, bar none.

See, the controllers have trackers just like the little squares you see on the headset, which lets the Vive know exactly where they are (and by extension your hands and arms) too. In fact, the Vive actually shows them to you when you have the helmet on. And let me tell you: It is fucking awesome. You see them in real life, put the headset on, and continue to see them in the virtual world. They act as an anchor point as you travel from real reality to a virtual one; it's still your body and your arms, just somewhere else. It's a small detail but it makes all the difference in the world. 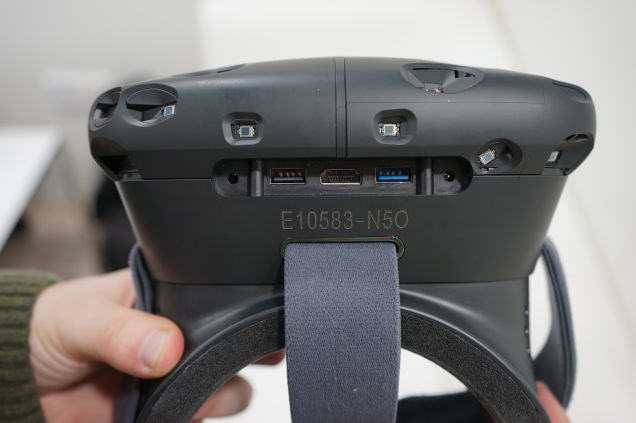 After you set up the sensors on the wall, but before you get down to business, you have to set the size of the room you're in. That becomes your virtual space. Your god damn holodeck. Once you do that (and once that you've cleared all the objects in the way, duh), you are ready to go. And should you approach to the limit of your little corner of cyberspace, a translucent grid appears, a virtual fence that loudly implies "if you keep walking you're gonna hit a real wall and it will suck."

HTC and Valve had a variety of demos to show off what this puppy can do. In the first one I was sent undersea to a ship wreck to just sit and think and grab at things. The ship—which I was free to explore—was littered with fish, fish I could actually poke and prod and try to catch with my real/virtual/really virtual arms. Then, there's this moment when a huge whale appears, stops, and just stares you down with its huge eye. These are the moments that are the hardest to explain when you're writing about virtual reality, but in that precise moment I felt so, so tiny. And it's that, so much more than screen resolution or refresh rate, that matters most. 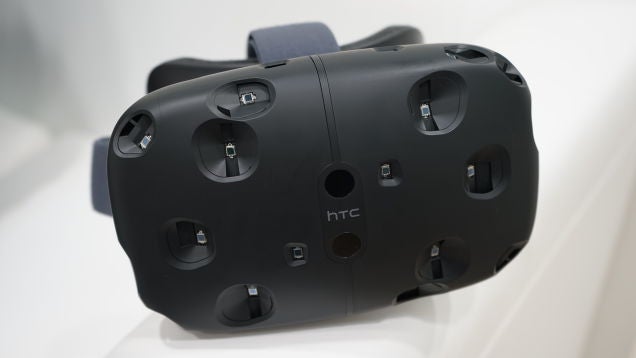 For the next demo, I was a giant, standing in a battle between warring armies of tiny soldiers. I could kneel and watch them closer or I could jump over the walls of a castle to see what was behind. I wanted to squish them like ants but that wasn't possible, yet. And this is something that's only possible thanks to those wall-mounted holodeck sensors. You can move your head and your body any way you like, and the Vive can see what you're doing and adapt the point of view accordingly.

My personal favourite was one where I was transported to a kitchen. Graphic quality was not perfect, but I could see all kind of cooking ingredients around me: Tomatoes, mushrooms, eggs, meat. Then, a chalkboard appeared with a recipe and I walked around the kitchen to grab all those ingredients, open the microwave, turn it on, turn it off, open some drawers, the fridge, blah blah blah. Completely mundane, yes, but everything felt so, so natural. I was actually moving around a virtual kitchen, walking real steps, throwing eggs at the wall with natural throw arm movement (don't judge) and making tomato soup like a boss. 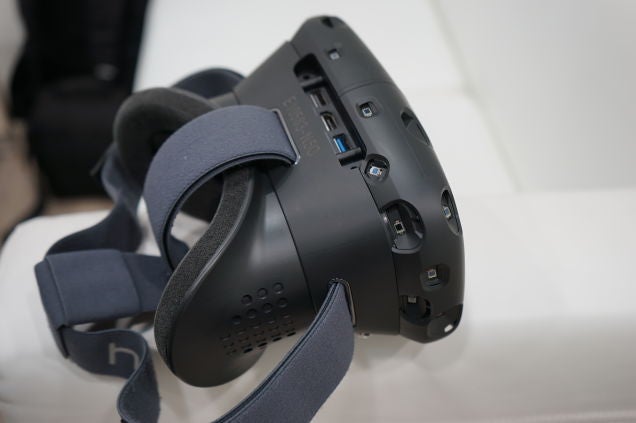 The final one was the best. Since Valve is behind the whole thing, I was suddenly placed in an Aperture Lab, from the Portal universe. Oh boy. GladOS robotic voice starts to talk and tells me to close and open some drawers. On one of those drawers there is cake, so it looks that it wasn't a lie this whole time. After that, you need to open a giant door with a big, red lever. A trembling, malfunctioning, Atlas robot appears and you are commanded to repair it with a cool 3D-laser floating interface. Again, everything is incredibly interactive and fun.

There's going to be two substantial differences from the early version of the tech I tried today and the final version, which arrives at the end of this year. First, the hanging sensors in the wall are going to be smaller. Right now they look like two big ol' boxes. Not great for decor. Second, the controllers are going to be completely wireless, for now they are wired to the PC that's running the simulation, like the headset is. 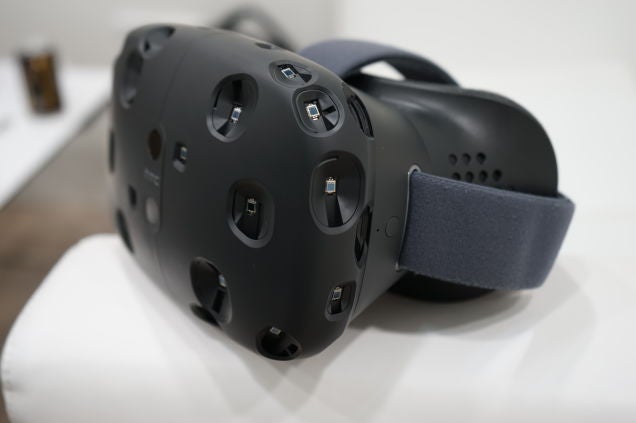 And that's probably the main weak point with HTC Vive. It's like The Matrix in that feels real but also in that you are wired into a PC with a cable that comes out of the back of your head. That will occasionally limit your free movement and is sometimes (but not often, in my experience) a tripping hazard. It is not a very big problem but noticeable anyway.

Even with that drawback, HTC and Valve have created the best virtual reality experience so far, though I wouldn't go so far as to say say the HTC Vive it's going to be the absolute winner of the VR war. Yes HTC and Valve's approach is the best I've ever seen for gaming, but Samsung's Gear VR is great for things like watching a movie on the go. And no wires! The Oculus Rift and Project Morpheus will doubtlessly be good for gaming too, and better for situations where you don't have that much space to move around. The Vive's use of a whole room is both one of it's greatest strengths, and biggest liabilities.

Virtual Reality is coming in many ways, shapes and flavours, and it's coming right now. And that, my friends, is that awesome scifi future I've always dreamed of. Let it roll.