Major US TV Companies Want Their Own Pipes for Internet TV

American TV content providers HBO, Sony, and Showtime are asking internet service providers to be treated as "managed" services. In other words, they want dedicated bandwidth for their video content, reports The Wall Street Journal.

If HBO and friends get their way, they'll be paying companies like US broadcasting giant Comcast for "a separate lane [that] would be exempt from monthly data-usage thresholds operators enforce for public Internet traffic". And guess who's going to end up paying for the extra cost of transit? The citizens.

This is not the same thing as paid prioritisation, the so-called "fast lane" practice that enables ISPs to treat certain packets of data differently than others. That would be a very bad thing since internet traffic is a zero-sum game. If some packets go faster, others must move more slowly. It would also be a direct violation of the new net neutrality rules laid down by the Federal Communications Commission (FCC).

What these streaming video companies actually want is dedicated bandwidth. It's sort of analogous to an HOV lane, where the content providers pay for a special road for their data heavy traffic. Some companies, like those that offer digital phone and video-on-demand services, already enjoy these benefits of being managed services. However, as WSJ put it, internet TV getting the same treatment "would tap into a grey area of the debate over 'net neutrality.'" It's not paid prioritisation. But it's not necessarily neutral, either. 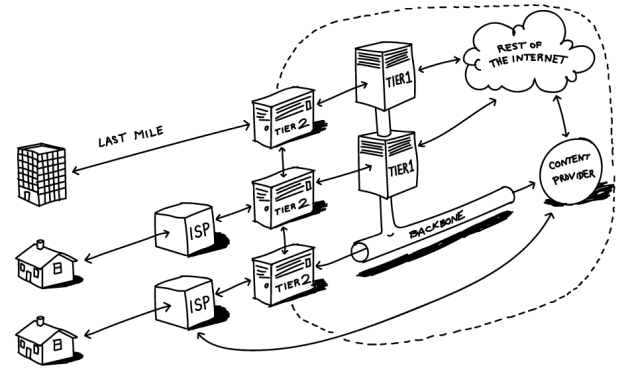 All that said, pull up a chair because this is going to be a long battle. Content providers like Netflix already pay for special transit agreements with ISPs like Comcast, if only because streaming video requires so much bandwidth. (See the above chart for a rough idea of how the internet works.) Netflix basically doesn't have any other choice.

Fearing the same grim future when their customers pay to watch the word "Buffering" float on a blank screen, HBO and other internet TV companies are looking for a loophole. Managed services might be the one. Eventually, it'll probably be up to the FCC to decide if they can send traffic through it. [WSJ]