Razer has spent years trying to build an impossible laptop: a powerful gaming portable with the facade of a thin business machine. It's come close four times, but the Razer Blade has never quite managed to stick the landing. At least until now. I've spent the last two weeks with the new 2015 model, and it's almost perfectly balanced.

Technically, it's a 14-inch, slim gaming laptop with the latest NVIDIA graphics chip (a GTX 970 to be specific), a quad-core 2.6GHz Intel Core i7 CPU, up to 16GB of RAM, 256GB of solid state storage and your choice of a 1080p or super-high-res 3200 x 1800 display, but it's really the culmination of three years and five generations of minor hardware revisions.

The first Blades were too big and a mite underpowered. The next version was small and gorgeous, but had a shitty low-res screen. Last year's model had that same super high-res display, but its graphics chip wasn't powerful enough to make the most of it. Now the company is finally offering a version of the machine that doesn't have any design flaws holding it back.

Beyond that, the Blade is the original thin gaming laptop; the first 0.7-inch thick machine that could still run high-end games at a decent clip. It inspired a lot of competition, and these days, there are quite a few thin gaming laptops out there. Is the Blade still the best? Maybe. 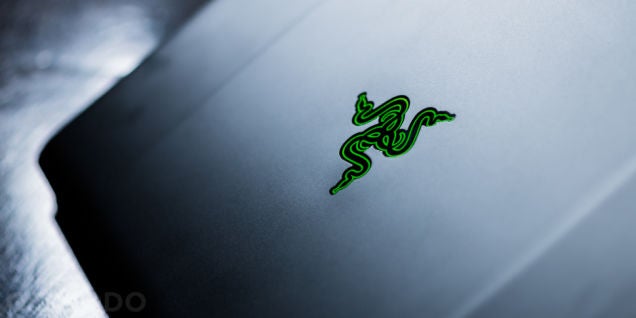 The design language of Razer's Blade laptops hasn't changed since its inception, and it doesn't really need to. These machines are absolutely stunning. Want a sleek, unibody, black anodised aluminium chassis? You got it. A full-sized HDMI port, three USB 3.0 plugs and headphone jack? Yep. It looks like a MacBook Pro with attitude. That similarity has always made it seem a tad uncreative, but the end result is so nice it's really hard to care.

The Blade's keyboard looks a lot like the Apple standard too, but I actually like it just a little better. The keys feel just a bit heavier, returning with more spring than the buttons on my MacBook Air.

Everything that made the previous Blade laptop design great is here, but so is everything those models lacked. The touchpad, for instance, is a great, super-responsive and smooth multi-touch mousing surface, but the two buttons beneath it still feel a little cheap and mushy. The chassis itself feels amazing, but somehow its largely blank sides don't have any room for a built-in SD card reader. Neither is a dealbreaker, but I take a lot of photos, and I don't like carrying around an adapter.

OK, so a lot of things about the new Razer Blade are a lot like the old Razer Blade. What's new here, besides a smattering of updated internals? If you buy Razer's flagship model, not a whole lot: the higher-spec Blade configuration ships with a 3200 x 1800 QHD+ multi-touch screen. Don't look at it directly, my friends—avert your eyes! I know those high numbers sounds flashy, but following that path leads to nothing but ruin. Were here are reviewing the 1080p Razer Blade for a reason: it's the only version of the laptop that makes any damn sense.

Don't get me wrong: super high-def screens are wonderful, but they're not the best choice for thin and portable gaming laptops; not yet, at least. The latest mobile GPUs still can't quite push the most intensive games to those resolutions and still maintain a high level of graphical detail.

The Blade became my daily driver while I had it, but that's not the metric that matters. Yes, it can browse the web, edit photos and jot down text like a champ — but it's a gaming machine. It's designed to play games. So I played games. How did they play? Wow. That's how.

I've seen five generations of Razer Blade laptops punch well above their weight, but the 2015 model hits the hardest. I threw some of the toughest games in my library at the Blade, and it shrugged them off with ease at the 1080p resolution. Tomb Raider happily ran at Ultimate spec, Crysis 3's highest graphical settings flirted with playability, and The Witcher 2's unforgiving Ubersampling mode (which I never thought I'd see run on a laptop this thin) caused only minor frame rate hiccups (though the game's FPS did double when I turned it off, as always).

Even Far Cry 4 – a taste of where PC games are headed graphically — ran pretty well at maximum settings, though I did wind up dialling it back a couple of notches to keep the FPS consistent in busier firefights. If you're less picky than me, you might not need to dial these games back at all; I refused to accept less than 40FPS on average.

But keep in mind that the Blade is just barely crossing the threshold where it can play all of today's games at 1080p resolution. The same may not be true of tomorrow's PC games: they'll run, but not at maximum settings. And if the 1920 x 1080 Blade only barely ran Far Cry 4 at its highest settings, how well do you think the 3200 x 1800 model will fare?

I'm not saying there's anything wrong with the higher-res Blade, I technically haven't used it — but I did use last year's model, and I'm well aware of the problems that come with Ultra HD displays. Yes, the super-high-res screen was beautiful, but it eats up a lot more horsepower to play games at that resolution, and a lot of programs still don't scale well. Yes, you can configure the display (and games) to run in 1080p, even on the high-res screen, but it doesn't look as crisp as on a display with native 1080p resolution. Yes, it's probably a better screen, objectively, but the 1080p Blade will probably give you an objectively better gaming experience.

And then there's battery life to consider. Higher resolutions screens suck down battery, and the Blade's battery life already isn't amazing. Four hours in our standard battery test (a busy web-browsing simulation with streaming video at 70 per cent brightness) killed the Blade dead. That's not terrible for a gaming machine, but it's less than last year's model and shorter still than Razer's 2013 laptop, which ran for over six hours. I was hoping the lower resolution screen would buy back some of that lost battery life. It didn't. Which means the Blade probably still can't replace your portable work laptop.

- It's the Blade I've been waiting for Razer to make: 14-inches, best-in-class graphics and a 1080p display.

- Still has one of the best Windows trackpads I've ever used. Its touch gestures work so well that I almost never even use its buttons.

- The Razer Blade probably has the smallest, thinnest and lightest power adapters I've ever seen on a gaming laptop. It hardly takes up any space in my bag. I love it.

- Can run anything in my game library with aplomb.

- It's sturdy and well-built. Everything has a nice premium feel.

- The 1080p model only comes in a single configuration. What if I want more storage space than 256GB?

- I wish I could disable the backlighting on the lid's Razer logo. Sometimes I just don't feel like advertising with a radioactive green glow, ya know?

I love physical trackpad buttons because I'm the kind of crazy bastard that tries to play PC games with embedded peripherals, but the clickers on the Blade feel light, mushy and a little cheap. They're weird, and don't match the premium vibe I get from the rest of the laptop.

- Not having a built-in SD card reader made using the Blade as my work machine a little annoying. So did its four-hour battery life.

The bottom can get painfully hot while gaming. Make sure to wear trousers if you're playing games on your lap. Thick trousers.

As ever for us in the UK, getting one of Razer's laptops isn't simple: they don't sell their computers directly to our market, so we have to make do with paying a bit over the odds to get one, through Amazon or some other online portal. The QHD model of the the new 2015 range sells on Amazon for around the £2,000 mark; it retails for $2,199 in the US, which would convert to around £1,450, so you see the premium that needs to be payed to own of these things.

If you do take the plunge to get one shipped here though, consider these points: do you want a gaming laptop? Do you care about how small it is or how sleek and professional it looks? If your answers are "yes" and "no" respectively, look elsewhere: you can get more for your money with a thicker, less premium machine. If you need a laptop that can get you through the day on battery life alone, move on. Nothing to see here.

If you've been lusting after Razer Blade laptops for years, but have had too many reservations to pull the trigger, consider pulling it now. The 2015 Blade is the machine I wished Razer built four years ago — its 14-inch chassis is the right size. Its GTX 970M graphics processor is the right chip. Its 1080p display is the right screen. It's everything that made previous Blade laptops great, but with components that don't outpace or undercut each other. For the first time, it almost feels like we have a Razer Blade with nothing holding it back.

It's not the "perfect" laptop, but it's the closest Razer's come yet. The day a Blade comes out with all day battery life is the day I put my MacBook to rest.