Spock and the Motorola StarTac

My mate Scott is this big time photographer who shoots all sorts of famous people. So, when news of Leonard Nimoy's death broke last week, he had a fun little anecdote to tell me about the Star Trek actor and his favourite mobile phone.

It was long before I decided to turn pro, I was shooting gardens for this friend of mine Jon Goldstein who's kind of a famous landscape architect. He did the Hotel Bel-Air, he did the Beverly Hills Hotel, Mark Wahlberg's waterslide, all sorts of stuff. So I was tooling around with him shooting all his gardens and one day we go shoot Leonard Nimoy's. This was around 2000 or so.

His house is right next door to the Hotel Bel-Air. It used to be part of that hotel, which is really cool because if you're familiar with that property, the way it uses narrow hallways and white wood, it's really elegant. And old. His house really feels like a continuation of it. I guess the hotel had fallen on hard times when he bought his house and they sold off this little piece of it. So he's got this beautiful, mature, lush landscaping and he's got this chromed Picasso goat sculpture in the back yard.

So he says, "While you're here, would you mind taking a picture of me and my wife?" I said, "Not at all."

I brought my lights in and he's a big photo enthusiast himself, so we started chatting. At some point, he had to take a phone call and when he finished, he saw me smiling.

The hot new phone at the time was the Motorola StarTac, which was a dead ringer for the Star Trek communicator.

He said, "You know, when I first got this thing, I didn't even connect the dots. I was sitting at a stoplight one day and all these people were pointing and laughing, and I realised the great irony of it all."

We had a great belly laugh about it and that was it.

He had this great plaque on his gate that read, "Surviving trespassers will be prosecuted." 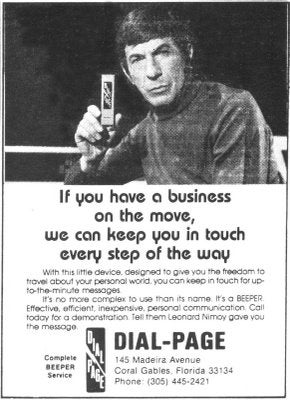 I figured this was a fun little reminder that, while we haven't made first contact or discovered warp propulsion yet (events that will likely go hand-in-hand), the 49 years since Star Trek began airing have brought us surprisingly close to some of its visions. Live long and prosper.