Steam Machines are Back

When I heard Valve wanted to take over the living room, I didn't believe it. When the rumours came true, I didn't think it could be done. When Valve failed to deliver Steam Machines last autumn, I felt vindicated. Now, a year later, it's happening. I've tried them. I'm about to eat my words.

I may have been wrong, but my early scepticism was justified. The idea was ridiculous: how was a digital game store going to get into the hardware business, outclass Sony and Microsoft, make Windows usable on television and make Linux a viable PC gaming platform? But they did it. My gosh they did it and here's how they've finally got it so right:

The Steam Controller was always the one part of Valve's living room plans that I actually believed in—or at least wanted to. The gamepad as we know it today is stagnant, unchanging. With minor exceptions (a touchpad on the PS4, perhaps, or better triggers on the Xbox One) it's a black hole where innovation goes to die. Valve's early prototypes threw out all conventions, replacing analogue sticks with weird haptic touchpads, promising a touchscreen in favour of face buttons. It was kind of awful, but it was also new, different and fresh. Check it out: 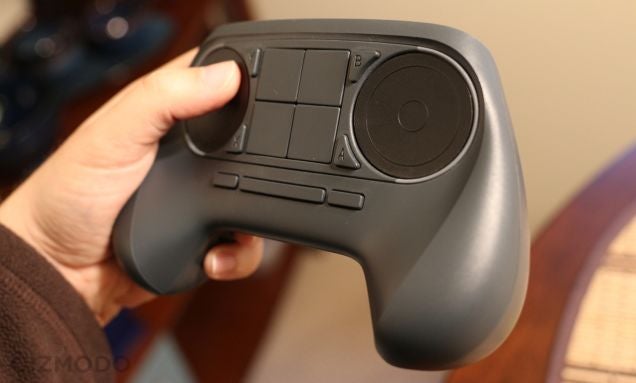 It's so much better now. The final Steam Controller kept the weird touchpads (which let it emulate a surprisingly precise mouse), but also added a proper joystick, traditional face buttons and a lot of refinement. The "learning curve" I used as an excuse for the original prototype's awkwardness is severely diminished. Within mere minutes of using it, I was deftly using its controls to guide The Talos Principle's robotic protagonist through corridors. I dodged flak cannons in Unreal Tournament. I was comfortably performing precise motions I just couldn't get right on the earlier prototypes. It's quieter, too. I can still hear the engine humming which drives the Steam Controller's haptic feedback (a light ticking sensation that follows your thumbs across the touchpad), but it's no longer so loud that it's distracting.

It's not just the refined touch surfaces that sold me on the controller though: it's the entire design. This is the third Steam Controller design I've held, and it's by far the most comfortable. My fingers instinctively fall on the rear "grip" buttons hidden around the gamepad's back, and toggling the shoulder, menu and face buttons feel natural. The new analogue stick is a godsend too, injecting all of the new weirdness with just enough familiarity to make everything easy.

There is still a learning curve, of course: the touchpads are uniquely alien compared to other game controllers. But they're no longer daunting or insurmountable. It reminds me of the first time I tried using a mouse to control a first-person shooter on the PC: it's more sensitive than I expected and I'm worried I'll lose control. I didn't back then. I don't think I will when the Steam Controller comes out, either.

Valve's Steam Controller is a huge part of its taking-over-the-living-room effort. Every Steam Machine comes with a Steam Controller. And it's very good. It's weird, too, but it has to be: there would be no point to building another dual-stick gamepad, and we already have dozens of those. Steam Machines can fail up and down for all I care, but I'm still getting a Steam Controller when it launches in November. It costs $50 (UK price and availability TBC), connects with a 2.4GHz dongle that supports two at once, and each controller can remember multiple dongles to make for easy pairing. Worth it.

The Right Interface and Hardware 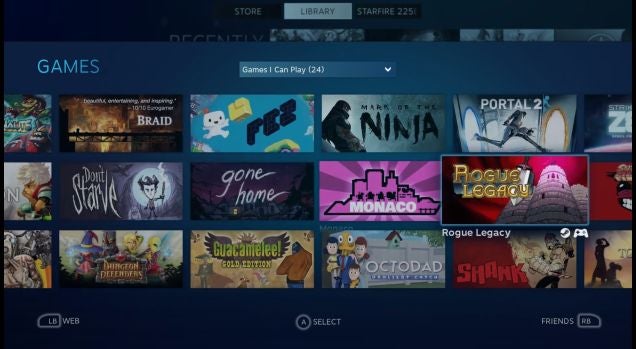 Before Valve could build a PC game console, it had to figure out how to help a Windows PC make sense on a TV. Enter Steam Big Picture Mode. It's the oldest component of Valve's play for the living room, and it's been around for years now. Today it's a different way to navigate Steam on Windows machines, but tomorrow it'll be the entire user interface for SteamOS. It's always been pretty good.

Now it's getting better. The video above is a complete look at how Big Picture Mode and SteamOS work on an Alienware Alpha as of last month (we got a little tired of waiting and made our own Steam Machine). Today, Valve showed me a more advanced version of the interface. It's largely the same but with improved community features, more compatible SteamOS games (more on that in a moment) and a customisable control menu to make sure that funky gamepad works with everything in your library.

New features like Steam Broadcasting mode are poised to help Valve compete with Twitch for streaming your gameplay exploits, and a new, touch-typing interface eliminates the need to keep a keyboard at your sofa. Between that and the ability to swipe through webpages like a tablet with the Steam Controller's left touchpad — while still having the right touchpad as your mouse cursor — it could make for one of the best TV web browsing experiences as well. The only obvious thing that's MIA, for now, is the ability to power on and turn off a Steam Machine from your sofa.

The Steam Link is a micro-PC that does nothing but Stream games from an existing gaming PC to your TV—wirelessly over the internet, or through an Ethernet connection. It's affordable, and it's the device none of Valve's hardware partners were making. It's what makes the Steam Machine living room experience possible for gamers who already have high-end PCs and don't want a new machine. It's the essential piece of the living room puzzle that nobody else was making, and I wish it was already out.

(Valve says the Link has 802.11ac MIMO with four antennas, but still recommends plugging in an Ethernet cable for the best experience.)

This combination of devices, streaming and interface makes PC gaming feel at home in the living room. It makes it feel way more like a game console.

I used to laugh at my die-hard Linux friends that claimed to be gamers. They always seemed to be fooling themselves, championing rare games with native compatibility or using complicated "compatibility layers" to force Windows games to run on the open-source OS. I can't laugh at them anymore.

SteamOS looks like a normal game console, and its interface is just like the one I use on Windows—but in reality it's a lightweight Linux distribution. No games, right? Wrong, wrong, wrong.

Valve has been championing Linux for years now, and it's finally paying off. Not only are there already a lot of great SteamOS games available on the company's store, but plenty more are coming — and some of them are really high profile. Buying a Steam Machine instead of an Xbox One won't keep you from playing Batman: Arkham Knight the same day it hits Windows. You'll still be able to play The Witcher 3: Wild Hunt, Shadow of Mordor, Payday 2 and dozens of other AAA games.

Better still are all the PC-exclusive games that console gamers won't get. Fancy a game of Wasteland 2? You can have it — and that weird new Steam Controller might even make it playable. Are there fewer games on Linux? Yes. But that's changing.

All the Steam machines launching this November, including Alienware's Alpha, machines from Origin PC, Gigabyte and Falcon Northwest

We were wrong: Steam Machines didn't die. They just went into hibernation. When they arrive to market, they'll have a hell of a lot to offer. What they'll offer sounds like a damn good experience, despite my early reservations. Valve and its hardware partners have actually created a PC gaming living room product that I might be able to recommend to my unwashed console peasant friends. And me? I get a really nice gamepad. It's an exciting time for me. Suddenly, November seems far, far away.