Virtual Reality is Happening, But Like for Real This Time

Virtual reality is a lot like the flying car: It's always juuuust a few years off. But recently—just this week—the VR hype has reached a fever pitch. And let me tell you this is no Virtual Boy bullshit. When we look back at the past through rose-coloured VR headsets, this is the moment where we'll see that it took off.

Between the announcement of Valve and HTC's Vive headset at Mobile World Congress, and the slew of Game Developer Conference announcements that have followed, the crawl towards virtual reality has turned into a flat out race.

I know, I know. You're sceptical. And you have every right to be! We've all been burned by bad, not-quite VR. Maybe you've had your retinas singed by Teleroboxer or played a game of Beach Head at an arcade and emerged with your life distinctly unchanged. Maybe you've even spent 10 or 15 nauseating minutes playing Euro Truck Simulator in an Oculus Rift at a crowded event somewhere, glancing around at a low-res world that's smearing right before your very eyes.

It's hard to square those experiences with the repeated, breathless squeeeeees of "Oh my god you guys" from professional nerds like me. First about the Oculus Rift, and then about Sony's Project Morpheus, and now about Valve and HTC's Vive.

That's in part because it's wildly hard to write about great virtual reality. It's hard to film it. It's hard to even hint at what its like without veering off a cliff into meaningless specs or runaway hyperbole. I can tell you that Project Morpheus can refresh at 120 frames-per-second(!), and I can swear up and down to you that virtual reality has repeatedly blown my mind, but there's only so much either of those things can do.

The simplest way I can put it is that VR technology has finally reached a point where it can reliably cut straight through conscious thought and speak directly to your lizard brain. It's screams past the I am in a room looking at a screen inside giant a doofus helmet part of your brain and straight up tickles the oh shit I am about to be eaten by a god damn dragon part.

Yeah, you chuckle when you remember that you're just some schlub with a mask on, but first you have to remember first. 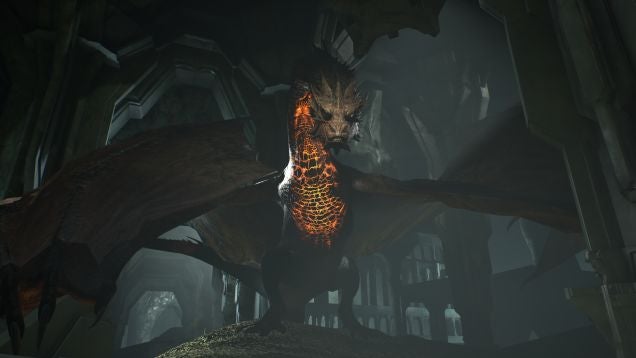 This a crucial line that the tech has only just recently crossed. In late 2012 the original Oculus Rift offered split-second hints of that real-life feeling. Barely two years later in 2015, Valve and HTC's Vive has it in spades.

In good VR you'll involuntarily flinch. Your stomach will drop. You'll get shivers. You'll gasp. I can tell you about it all day, but you really need to strap one of these insane goofball masks to your face and see it for yourself.

...and it's finally coming.

But you can't! None of these are really real yet. The best you can hope for is to get your hands on a prototype-y developer device, a half-baked proof-of-concept that's a nightmare to use and intended for work, not play. Oculus blue-balls has been building for years. A consumer version is perpetually riiiiight around the corner, just not quite yet.

Which is where Valve and HTC's Vive headset comes in. Revealed last weekend at Mobile World Congress in Barcelona, the Vive is not just backed by one of the biggest juggernauts in gaming. It's not just mind-blowingly fantastic by virtually all accounts. It has one crucial feature that's left everyone else scrambling to catch up: a release date. 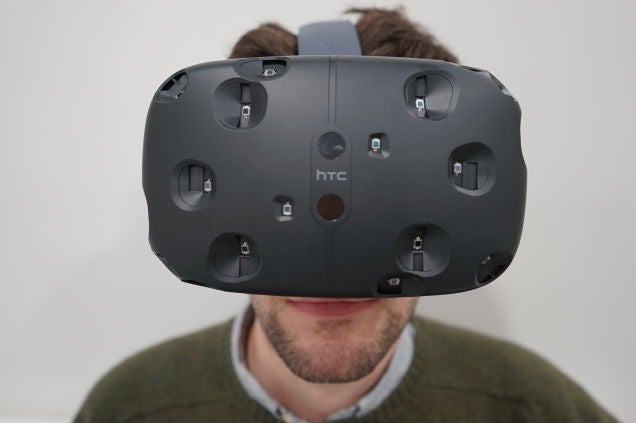 Vive developer kits are due to ship this spring. The final version by the end of the year. That's the first crack in the dam that's been holding back all this VR goodness. The rest is already rushing through it. Oculus just announced its first consumer device will come out this year—in the form of a Gear VR headset powered by a Samsung phone. Sony's PS4-compatible Morpheus headset is now due for landing in early 2016. By the end of next year, there's a good chance we might even see the final, fabled Oculus Rift.

But even if it doesn't set the world on fire...

While the tech has definitely reached the tipping point, and every big name in virtual reality is preparing its champion headset for the coming land-grab, there are still plenty of things that stand to hold virtual reality back. The headsets are big and bulky. They will leave lines on your face. And even if they eventually shrink down to the size of ski-goggles, you are going to look like a dweeb in VR. That's just a fact.

LOL look at this dweeb.

Serious and really impressive VR headsets like the Oculus Rift and the Vive need to be tethered to a ludicrously powerful and expensive gaming PCs, on top of costing (probably) several hundred pounds themselves.

The Morpheus's PS4 brain is invariably too low-powered to make use of its fantastic display tech. Oculus readily admits it still hasn't figured out how to do VR game controllers. The Vive basically requires an entire empty room to work at its best. I hope you have an extra holodeck room in your mansion!

And all that's to say nothing of the biggest question of all: What the hell are you going to do with one of these? Play video games? Demos are fun, sure, but so far there's no hint of a flagship virtual reality game that would make these goofy goggles a must-buy for anyone other than super geeks. Barring the release of something like a VR-only Half-Life 3 (fingers crossed?) there might not be one for a while.

Of course it's not just games. Could virtual reality be future of social networking? Facebook seems to think so, but that's a future that's years and years if not decades off in the future. Movies? Maybe! Oculus is already making its own, and Valve has partnered with Lionsgate and HBO to similar ends, but all that's really come out so far is one little (but apparently pretty awesome) short.

VR's potential looms large, but only the tech has come to the party so far. The movies and the games and the "killer app"s are still missing in action. There's no guarantee that they'll show up soon. Or at all.

So whether virtual reality is going to Change The World is still totally up for grabs. Fresh off a stint flying fighter jets in space, or riding a street luge under cars on the highway, I'm always 100 percent sure it just has to. Scrolling through a list of slack-jawed geeks with screens strapped to their faces, I'm a little less sure. But there's one thing I'm positive about: Virtual reality is here to stay this time.

The Oculus Rift DK2—at this point miles behind the best VR there is to offer—has been good enough to get hobbyist communities of VR nerds humming. In those geekier circles, the continued existence of virtual reality is already practically assured, whether it's stuff like the Vive for folks with room to spare, Oculus for gamers with a PC and a comfy chair, or Morpheus for the console gaming set.

Even if the worst comes to pass—if no Oculus-/Vive-/Morpheus-justifying experience comes along—we're already carrying the baseline future of virtual reality in our pockets. Samsung and Oculus' push to turn phones into VR and VR into phones is already of to a great start. So much so that Oculus will bet its first real outing on the concept.

And while it's easy to dismiss the lowly Google Cardboard as a gimmick that skews more View-Master than true virtual reality, you can't argue with its almost impossibly broad accessibility. Think about this for a second: Entry-level VR requires literally a piece of cardboard and a thing you already own. It may not sell the concept nearly the way more sophisticated headsets can but it's simply too approachable and legitimately cool to ignore. 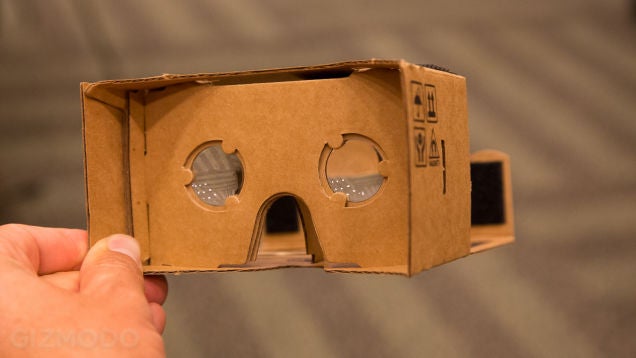 Gear VR—a slightly more serious take on the same basic principle—makes the experience so much better with just some plastic, some padding, and a little proprietary screen tech. When the real Gear VR launches for like £50, who wouldn't want to just pick one up for kicks?

What gives this latest surge of virtual reality its staying power is the sheer variety of the approaches, and the fact pretty much ever single flavour is both competent and also attractive in its own way: depth of immersion, price, accessibility. Take your pick! However the finer points of the virtual reality future shake out—whether your taking pot-shots at zombies with a shotgun or watching movies on a virtual movie screen next to your buddies on a different continent—people are going to keep strapping screens to their faces. This isn't going away.

I couldn't be more pumped.

Gizmodo UK's Oculus Rift coverage is supported by Ebuyer and PC Specialist --Click here to check out its range of gaming PCs, components and peripherals.