For 50 Years Now, the US Has Had a Nuclear Reactor Orbiting the Planet

Exactly half a century ago this week, a rocket shot off from the California coast. It carried the US’s first and only (known) space nuclear reactor, SNAP-10A, which has been circling the Earth ever since and will continue to circle for another 3,000 years.

Back in the 1960s, NASA ran a Systems for Nuclear Auxiliary Power (SNAP) program to study nuclear power’s potential in space exploration. This program sent up the first radioisotope thermoelectric generators, a technology still used in space probes like Voyager and Curiosity today. Radioisotope thermoelectric generators aren’t nuclear reactors, though. They simply harness the heat from a decaying element, such as plutonium-238.

SNAP 10-A was different. SNAP 10-A was actually a functioning reactor with a controlled fission reaction inside. It contained enough uranium fuel to produce up to 600 watts of power for a year. Twelve hours after take off on April 3rd, 1965, it settled into orbit 500 kilometres above Earth and humans back on the ground remotely switched on the reactor.

At first, things went well. But 43 days into the mission, electrical systems on the satellite carrying it failed, and the reactor shut down. It’s still up there orbiting. Given its current trajectory, NASA expects it to stay in orbit for another 3,000 years. 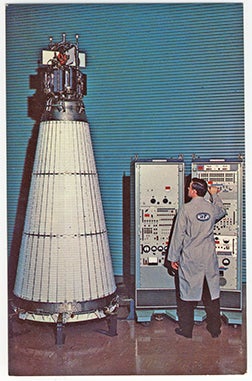 But it’s getting crowded up there. In November 1979, SNAP-10A suffered an “anomalous event,” and the parent satellite begins shedding pieces. “Six more anomalous events occur in the next 6 years, releasing nearly 50 trackable pieces. Release of radioactivity is possible but not confirmed,” reads a NASA report. These events were not documented in more detail, but they may have included a collision.

Since SNAP-10A, NASA has toyed with nuclear reactors in space, most notably the SP-100 starting the 70s. But funding issues and safety concerns terminated the program. The U.S. has only SNAP-1oA, but Russia has sent dozens of satellites with nuclear reactors into space, the most notorious of which crashed and scattered radioactive debris all over Canada in 1978.

So that’s one reason why sending nuclear reactors into space is not such a great idea.