New York City is great at a lot of things. Walking! Skyscrapers! Pizza! And according to a new study on the world’s megacities, NYC can add one more thing to its list of things it excels at: Rubbish!

Over at Motherboard, Brian Merchant has declared New York the world’s most wasteful city. This is based on a huge research project on megacities (metropolitan areas with over 10 million people) that was published in the Proceedings of the National Academy of Science. In almost every case, New York won as the most energy-gobbling, rubbish-generating, resource-sucking city on the planet. (The distant runner-up is Moscow.)

Take this chart from the research, which is weirdly incomplete but explained below: 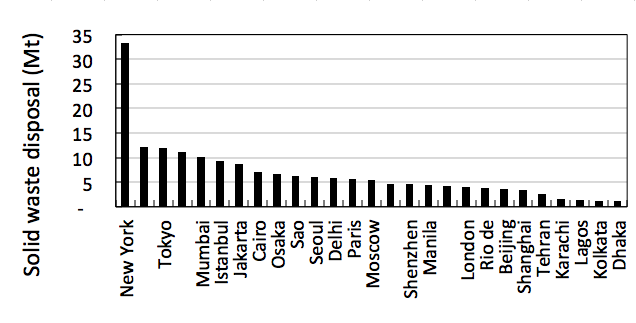 New York City creates 33 million tonnes of waste a year. The next closest offender is Mexico City (the label is missing from the graph above), which generates a comparatively quaint 12 million tonnes of rubbish, followed by Tokyo, which, again, has a full dozen million more potentially rubbish-generating citizens. The average New Yorker uses two dozen times more energy than someone in Kolkata, and creates 15 times as much solid waste. I’ll say it again: New York is one dirty megacity.

Guzzling the most fossil fuels is another way that New York City wins:

“The New York metropolis has 12 million fewer people than Tokyo, yet it uses more energy in total: the equivalent of one oil supertanker every 1.5 days,” study author Chris Kennedy.

Studies on megacities are very important as there are now 26 of them on the planet, and about half of the world’s population lives in one. But as this study shows, if those megacities were 26 New Yorks, we’d all be dead.