The Seashell-Inspired Material Creating a New Wave of Safety Gear

The risk of injury in professional sport has been a central feature in recent debates about how well protected our stars are. Only recently, Argentine football player Emanuel Ortega died of a fatal head injury after hitting a concrete wall during a game.

One solution is to increase the use of protective wear and to improve existing designs. The Australian Cricket Board inquiry into the death of cricketer Phillip Hughes, two days after he was struck on the neck where his helmet offered no protection, could result in newly-designed safety helmets being made mandatory.

At Sheffield Hallam University we’ve been developing improved materials for impact protection in sports. The materials have the fascinating and unusual “auxetic” property that can be used in helmets, pads, guards, gloves, mats and barriers.

What are Auxetic Materials?

Put simply, instead of becoming thinner when stretched (how we usually expect materials to behave), an auxetic material actually gets fatter. When compressed, the material becomes thinner.

At first glance this fascinating property to auxetic materials may appear highly unusual, but is actually being discovered to be a key feature of a growing number of natural materials. Examples include certain forms of skin and other soft biomaterials, and inorganic silicates such as quartz and cristobalite. Man-made auxetics now include honeycombs and foams, fibres and fabrics, carbon fibre-reinforced composites, microporous polymers, metals and ceramics.

The inspiration for the current work on auxetic materials for improved impact protection equipment in sports comes from the ultimate natural armour protection system: the humble seashell.

The inner layer of the two-tier armour protection system found in seashells – nacre, also known as mother of pearl – provides high stiffness, strength and toughness, properties to withstand a predator bite or rock impact on the shell surface. This exceptional combination of properties enables the seashell to avoid catastrophic failure and maintains the integrity of the shell in the event that the hard and brittle outer layer becomes cracked. Nacre is also known to be auxetic.

So why has nature evolved armour protection systems that operate this way? We think a number of factors may be at play, all linked to the basic premise that the auxetic property is a route to achieving extreme or optimal values of other useful properties that are not easily achieved by “conventional” materials.

Unlike conventional materials which adopt a “saddle” shape when bent out of plane, an auxetic material naturally adopts a convex “dome” type curvature similar to the overall shape of the seashell. This characteristic dome-like double curvature for auxetic materials is ideal for sports protective equipment such as helmets, and shoulder or elbow pads, in ensuring close fit of the equipment to the body for maximum comfort and performance.

In terms of response to impact, the tendency of an auxetic material to contract width-wise under compression leads to a dense localised area that provides increased resistance to impact where and when it is required (below). 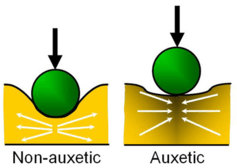 Auxetics have also been found to provide increased fracture toughness and energy absorption. In the case of nacre, these properties increase the energy that is dissipated by a change in the volume of the material by an astonishing 1,100 per cent.

So auxetics have excellent acceleration management properties and have significant potential to act as the energy absorbing material in crash barriers and mats. In rigid dome-shaped helmets and protective pads, auxetics offer lightweight, stiff and strong materials solutions. In flexible protectors, the ability to conform to convex surfaces, such as are found in many places on the human body, means that auxetics should provide and maintain better fit, and be less restrictive to player movement, throughout dynamic sporting activity.

Andy Alderson is Principal Research Fellow at Sheffield Hallam University. This article was originally published on The Conversation. Read the original article. Image by David Eickhoff under Creative Commons license.