The Best Smartwatch for Every Wrist (Updated)

I've been keen on smartwatches pretty much since day one. I get a lot of emails, texts, and assorted notifications, most of them crap but some vitally important.

Having a screen I can glance at on my wrist makes life infinitely easier. But smartwatches have come a long way since they showed up a few years ago. Which ones are best at keeping me from pulling out my phone? I decided to find out.

Plenty of wrist computers look to prove their worth by having features like speakers and apps and data connections and touchscreens and miniature espresso makers (I might have made that last one up). But simple is better. I've found that a smartwatch only needs to perform two main jobs to be worth a damn. These are, in order of importance:

This discovery led me to rule out a few types of wearables: straight-up fitness trackers, for instance; as well as "smart" analogue watches that can vibrate but not show me the subject line of an email. Most importantly, it led me to rule out any watch that can't go at least 24 hours with its screen on the whole time. A watch that does not show you the time when you look at it is not a good enough watch and there's nothing more maddening than looking at your wrist and not seeing the time. Gesture-wake is never perfect, so always-on is mandatory. And of course, a dead watch tells no time.

After I sorted the wheat from the chaff, these were the watches worth wearing.

The only smartwatch I can recommend without knowing ANYTHING about you is the £149 Pebble Steel. I love this thing. It’s missing a lot of the fancier smartwatch features (sometimes I missed being able to use voice control, or being able to swipe through my notifications with a finger instead of by pressing a button) but the trade-off is worth it because the screen is always on, always readable, and the battery lasts for 5 days, easily. Even better, it looks classy enough that I’m comfortable wearing it even if I’m dressing up for a formal dinner or fancy business party. This ain’t no child’s toy.

It’s also incredibly versatile. Unlike Google’s Android Wear watches or the Apple Watch, the Pebble Steel works with Android and iOS. Design-wise it’s small enough that it looks fine even on daintier wrists. It’s got leather and metal band options, a bajillion different faces to choose from, and I’ve never seen a third-party app store as robust as Pebble’s. The Pebble Steel is on the cheap side when it comes to the better-looking smartwatches, particularly now that it only costs £149 (it was £180). Just know that the new Pebble Time Steel is right around the corner.

The Most Stylish: Apple Watch

If all you care about is style, the £300+ Apple Watch is the one to go for. You can get its precision machined metal body in aluminium, steel, or even 18-karat gold if you’re feeling particularly spendy. The attention to detail is incredible, and the interchangeable straps are a real treat: even the basic Sport band has a luxurious feeling, and others feel pretty decadent for a miniature wrist computer that will likely soon be obsolete.

The Apple Watch also has the potential to be the most functional smartwatch someday, thanks to the App Store, but it’s not even close right now. It feels pretty half-baked. It can do more things than a Pebble or Android Wear but it doesn’t do some of them particularly well. You also need an iPhone 5 or newer to use the Apple Watch at all. If you really need to triage your Gmail inbox, I’d recommend looking at Pebble or an Android wearable.

The Most Fun: Pebble Time

The £179 Pebble Time is newer and more powerful than the original Pebble and Pebble Steel. It has a colour screen and an updated UI that looks really cool and never runs out of space for apps. So why isn’t it my default smartwatch pick? Because the new Timeline interface doesn’t do all that much, yet, and the screen is dimmer and harder to read than previous Pebbles.

Why do I recommend it at all? Because it’s the most fun I’ve ever had using a smartwatch. Every single action I take is accompanied by a whimsical animation that makes me smile. The app store is filled with fun ideas that take full advantage of the limited processing power on tap. And importantly, Pebble has made it rewarding to check that app store on a regular basis to see which new toys you can add to your wrist. (On Android Wear and the Apple Watch, phone apps and watch apps are annoyingly muddled, so you can’t tell what you’re getting into.)

If you like what the Pebble Time has to offer, I would probably still wait for the $300 (UK price TBA) Pebble Time Steel, which adds additional battery life and will probably fix the dim screen issue. But the Pebble Time is a solid pick if you enjoy being a beta tester.

The Most Smartwatch for the Price: Pebble

If you want to just dabble in smartwatchery without dropping a lot of cash, get the original £100 Pebble. Functionally, it’s the same as the Pebble Steel but in an cheaper, more robust (and uglier) plastic body. I hated the Pebble’s look at first, but eventually I came around to kind of dig it. Also the plastic body and rubber strap also make it great for wearing at night (sleep-tracking) or in the shower (music control/just being way too connected). Even though the screen on mine got a little scuffed, I learned to love the little sucker for being so robust and trusty.

There’s no better way to explore whether you actually want a smartwatch (short of borrowing one somehow) than buying the Pebble. If I didn’t have so many new smartwatches landing on my desk, this is probably the one I would get. The Pebble Time isn’t cheap or feature-filled enough to supplant it... yet. 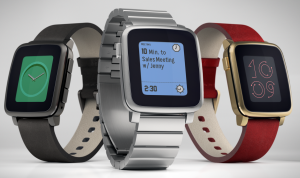 The Pebble Time is pretty good. It’s fun! But it’s not that much better than the Pebble Steel, and the too-dim screen could be a dealbreaker. The Pebble Time Steel, however, could be the best of both worlds. We’ll let you know as soon as we get one. 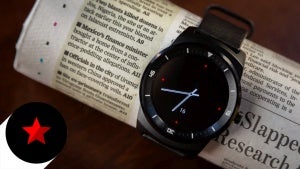 One of the best-looking Android Wear devices out there, the £170 LG G Watch R is pretty great. It looks nice and sporty, and the battery’s beefy enough to always last the day. It just doesn’t look particularly stylish compared to the Apple Watch, for instance. 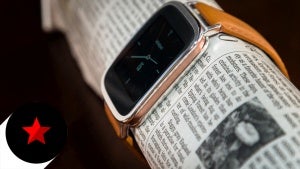 Our other former top pick for a stylish Android Wear device, the £199 Asus ZenWatch still looks great, but nowhere near as well constructed as the device that now holds its place. For a new low price of £160, it’s not a bad deal! 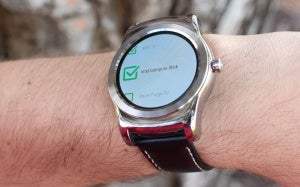 We’ve spent nearly two months with the £259 LG G Watch Urbane, and it’s not bad for Android Wear. But it’s bulky, pricy, and even the cheapest version of the Apple Watch makes it look like a toy. The button and plastic rear cover feel a little cheap, and the thick bezel makes it tough to swipe.

Moto 360
The £200 Moto 360 is beautiful, simple, and elegant, but it's not good enough. You occasionally have to shake the watch to turn on the screen, and battery life doesn't always last the day anyhow.

Pretty unremarkable but not ugly. Somewhat overpriced at £190 RRP. The transflective LCD screen is easy to see in bright sunlight but always-on AMOLED is just as good and easier on the battery. Options like the G Watch R and Zenwatch are just better.

Decent hardware, shitty software. Thin strip-like screen that functions like a tall, vertical display is bad at notifications. All that plus it's only compatible with Samsung devices. Pass.

More fitness tracker than smartwatch, the interface and notifications
leave a lot to be desired as far as smartwatches are concerned. 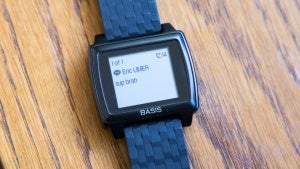 Way too many limitations. No Android 5.0 support, no way to do anything except see your notifications. Plus we had a really hard time keeping it paired with our phone. Good as a fitness tracker but not as a smartwatch. 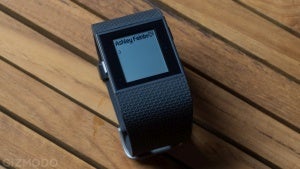 No way. You get call notifications, SMS notifications, and that’s it. They take up the entire screen. No way to see your email. It’s not the best fitness tracker for the money, and not a great smartwatch either. 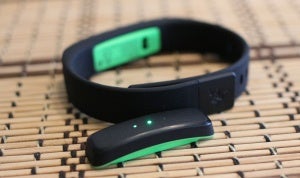 Not a smartwatch. This cheap fitness tracker does smartwatch notifications, but they’re woefully unspecific: you get three blinking green lights and a quick vibration on your wrist no matter what your phone is trying to tell you. And it doesn’t tell the time.

Fine, but both the Pebble Steel and the ASUS Zenwatch are better, prettier, and cheaper.

Like the G Watch, it's boring but not bad, though the Steel and Zenwatch have it beat in looks and price. Also the Gear Live's default strap is garbage, so you have to buy a replacement if you dont want it to pop off and break.

Big, clunky, expensive. It has its own data connection, but that's of dubious value and doesn't excuse the rest of its flaws.

Mirasol screen is cool, but this sucker is bulky, ugly, and hard to come by. 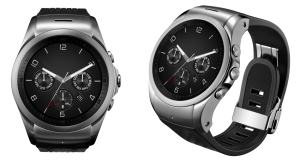 And this upcoming LG smartwatch has an immense battery and all sorts of new features. Looking forward to giving it a go, but seems like it won’t be sold outside Korea. 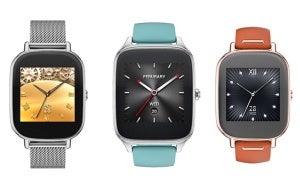 An Android Wear device with a digital crown like the Apple Watch? Definitely want to give this a go, particularly since the original was one of the most stylish watches we’ve used.

More of a fitness tracker than an smartwatch, with no smartphone notifications. Don’t confuse it with the ZenWatch or ZenWatch 2.

Clever analog/digital design but the tiny little horizontal window is just bad at telling you what you want to know.

Same deal as the M1 and Frame, except with regards to the cheaper Pebble instead.

Old, use proprietary Sony software, and are both just bad.

These watches only work with Samsung phones, so they would have to be truly amazing to be worth locking yourself down. They are not.

At this point, we’re convinced that the original Razer Nabu (the one with the screens) doesn’t actually exist for public consumption. You can’t buy one, and Razer won’t send us one either.

Runs straight up Android 4.2.2, which is noooooot designed for a watch screen.

Widely known to be a complete disaster.

Extremely mixed reviews, not worth dabbling with no-name software.

No screen, no smartwatch. Also expeeeensive at £300.

Announced at CES 2014 but never showed up. I’d try a £30 smartwatch if it existed, though.

Intriguing but expensive and more watch than smartwatch. Expensive ($350, around £220) and there are no reviews. The company wouldn’t send me one.

Sparse and bad reviews. Also these guys are promoting a ridiculously impossible smart ring right now so I don’t trust them at all.

All crowd-funded, none of them have shown up yet. Never buy a product until it actually exists.