Can the world’s tallest building be built in 90 days? It’s been two years since we asked that question, and as a report from a local Chinese paper illustrates today, the answer is an unequivocal no. At least not when the government thinks the plan is dangerous.

Back in 2013, a company called Broad Group announced it would build a 2,749-foot-tall (837m) building in just three months, thanks to Broad’s prefabrication technology that allows each floor to be pre-assembled in a factory and shipped to the site. Broad’s CEO, Zhang Yue, had good reason to be taken seriously: his company has demonstrated that these prefabrication techniques could put up a 30-storey building in 15 days. More recently, a 57-story was constructed by Broad in just 57 days as a proof of concept—a building the company calls “Mini Sky City.”

When Broad’s proposal was first floated, the company’s General Manager in the US, Sunny Wang, told Gizmodo that the only thing stopping construction was gaining official clearance. “It’s still in the phase of applying for the construction permission,” he said. “Hopefully we’ll start in September.” At the very least, it seemed like part of the building would be underway soon; indeed, the company began digging a foundation in Changsha, where it is based, two years ago.

But a full 20 months have passed since the plan was announced. And the projects’ coordinates — 28°19′14″N 112°53′51″E — show only a pit with the jagged edges that roughly correspond to the building’s proposed footprint: 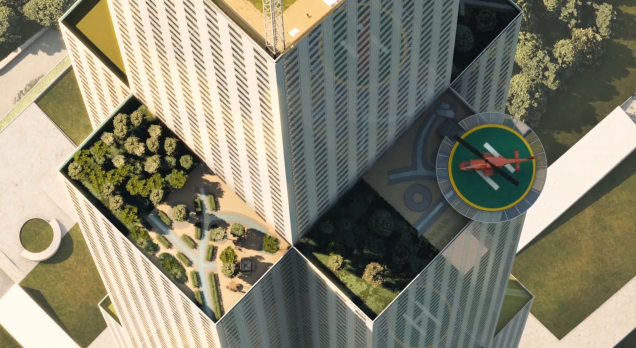 Last summer, we learned that the site was still empty, though it was being used by some nearby locals for farming watermelon and corn, as Broad Group tried to gain permission to start construction on site. According to a report from a local site Xiaoxiang Chen Bao this month, cited by the South China Morning Post today, the pit is now being used as an artificial lake. It is even supporting local agriculture as a fish farm:

One villager started to raise fish in March and has invested over 20,000 yuan in his business. “I raise fish on the construction site. It is not in secret, neither have I ever been stopped,” he was quoted as saying.

Photos from Xiaoxiang Chen Bao show evidence of the second, more pastoral life of the project, too:

But Broad is reportedly still attempting to push the building’s paperwork through the government bureaucracy, and says that it still plans to build Sky City. In June, a long BCC story about Zhang said the company is still pushing for clearance to start construction. “Buildings of 350m need to be approved at the national level in Beijing,” a spokesperson told the BBC. “Because of this, the official start date for Sky City is still unclear.”

Of course, reports about the demise of the foundations for Sky City smack of parable. Parable about overambitious developers, about overreaching architects, and modernity in general. And there are enough abandoned, empty, or water-filled foundations out there to remind us that this is a fairly common parable, too.