The upshot of reviewing Windows 10 on my own computers is that there’s nowhere to hide. When something goes wrong, I have to troubleshoot on the fly. I can’t say “Oh, I’ll just go back to my personal computer until I figure this out”. You know what’s not so nice? When you shoot the trouble, and yet — somehow — it survives.

Though my Windows 10 experience has mostly been positive, the cracks are definitely beginning to show. Add up enough issues, and I have to wonder if it’s really a good idea for people to start blindly upgrading.

Let me explain what I’m talking about.

I subjected my Lenovo ThinkPad X240 laptop to the greatest stress test I know: covering a time-sensitive tech news event. In this case, I went to see the new OnePlus 2 smartphone, with mere hours between the time I saw the phone and the time I needed to have a huge, picture-filled preview up on the web.

I didn’t bring my laptop charger, because I wanted to see how long the ThinkPad’s battery would last. I didn’t bring a second laptop in case it somehow failed. I trusted the computer to do its duty, including typing up notes from an interview with the company co-founder, pulling sample camera images off a pair of OnePlus phones, processing the RAW images I shot of those phones with my Canon DSLR camera, and of course, letting me write the actual post.

Thankfully, none of those things completely failed. But enough of them ate up enough of my time troubleshooting that I wound up having to add details and pictures to my hands-on post after I published it to the web.

The biggest issue, as I mentioned last week, is that my laptop’s Synaptics touchpad inexplicably won’t let me scroll through websites in the Google Chrome web browser. It works everywhere but Chrome. So the first thing I did yesterday morning was reinstall the entire web browser. That didn’t work. So I consulted the web for possible fixes. One forum told me to try installing a Chrome theme. Another told me to toggle on and off scrolling in my touchpad settings. Nothing worked. I couldn’t figure it out by the time I had to leave for the event, so Chrome (the place I do 90 per cent of my work, including all my email) was broken right from the start.

Having working email is non-negotiable for a tech journalist, so I needed an alternative place to check my Gmail. “Why not try Microsoft’s new Edge web browser?” I thought. Every time I’ve launched Edge this week, it felt pretty speedy. Perhaps I could write my posts there too.

Only the moment I tried to bang out a Gmail reply in Microsoft Edge, I discovered the browser couldn’t keep up with my typing. It was like my entire keyboard was on a giant delay. I switched back to Chrome, and sure enough, Edge was the culprit. Chrome? No delay. Edge? Fuggedaboutit.

Another thing that slowed me down ever so slightly, was discovering that you can only drag File Explorer windows by grabbing the very edge. Most of the extra space is totally ungrabbable. When I was trying to get some photos into my OnePlus 2 post, I kept missing by accident.

Even though this is all one contiguous white space, you can only grab where the yellow arrows are pointing—not the red.

Then there was the time my Gizmodo colleagues were trying to reach me in our Slack instant messenger, only I didn’t get any of their messages. I’d thought that Windows 10’s new multiple desktop feature would let me put my messaging tools on one desktop and my image editing and web writing tools on another, then switch between them with a flick of the wrist whenever someone called my name. Only it turns out that anything you put on another desktop ceases to exist in your current workspace. My Slack icon, notifications, and client all disappeared until I went to go find them.

Remember when I told you how my PC froze up when I started processing RAW image files in Photoshop, because Windows 10 let it consume all my resources? Turns out it’s not just a Photoshop issue. Opening a browser full of tabs did the same damn thing, slowing everything to a crawl. I couldn’t even get the system to respond long enough to close the browser for a solid minute. That never happened on this computer when I was running Windows 8.

That’s not a bad crop on the right side of this image: that’s the edge of my screen.

And then there are the UI glitches. Which I honestly don’t mind all that much, but they make me worry they might be symptoms of a larger issue. I’m talking about things like desktop icons disappearing, or my Windows calendar deciding to plonk itself on the edge of my screen. Or the battery meter spontaneously taking over my entire desktop. Or my Start Menu occasionally refusing to pop up when I press the Windows Key.

Hey, you know how if you plug a USB flash drive or a memory card into your computer, it’ll ask you what kind of action you’d like Windows to automatically take when it detects such a thing? It’s called AutoPlay, and Windows 10 has it too. Only as far as I can tell, it doesn’t actually work. “Tap to choose what happens with memory cards,” my computer asks me. I tap it, obligingly, and the notification disappears without doing anything at all. 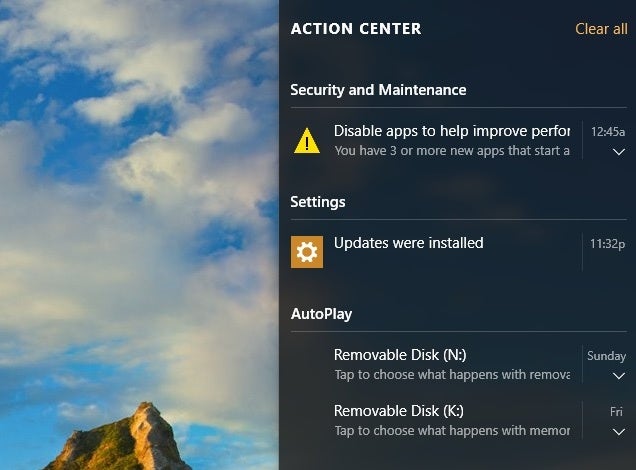 Often, I’ve wanted to change a particular setting on my computer, and used Windows 10’s awesome new Search function to just type in a few letters and see what autocompletes. And several times, I’ve followed one of them only to find out it leads absolutely nowhere. As in, Microsoft’s programmers linked to settings pages that don’t actually exist.

Though honestly, getting rid of some of Windows 10’s setting pages might be a good idea, because there are loads of duplicates. Like Windows 8, there’s the old Control Panel, but also the new touch-friendly Settings page, and many controls are duplicated across both. Some of them are exceptionally confusing, like the new Battery Saver mode. Is that the same as the Power Saver setting on my laptop? I assumed so at first, but nope.

Battery Saver wasn’t actually saving my battery when I found it running low! On the train, headed back from the OnePlus event, I noticed my computer was running hot, the fan spinning noisily, despite being in Battery Saver mode. Turns out my processor was clocking itself at 2.4GHz. (In other words, way the heck too hot.) Power Saver took care of that in a jiffy, but now it’s buried beneath an additional layer of menus.

Why was my processor running so hot, though? I’ve got a theory: despite the fact that I was using an LTE MiFi and trying my hardest to get a critical post up on the web, Windows 10 was secretly downloading and installing new updates in the background the whole time I was on the train.

Yeah, in case you haven’t heard, Windows 10 updates aren’t optional, and though they’re not supposed to download over a metered data connection, I couldn’t find a way to specify that. “Set up data usage limit” is one of those settings you’ll see in search that goes absolutely nowhere. When I got home, sure enough, Windows told me it had installed some new updates. I sure would have liked a chance to veto them!

None of these things are particularly terrible. None of them are reasons why you’d need to wait to upgrade to Windows 10. And I expect most of them will get fixed.

In fact, Microsoft’s rolling out a tool that will let you block unwanted Windows updates—likely due to the shitstorm that erupted when Windows 10 installed a faulty Nvidia GeForce graphics driver on a whole bunch of people’s computers. Including mine, by the way: I woke up to discover only one of my three desktop monitors working. (A quick restart fixed it.)

I’ve already decided I won’t be going back to Windows 8. I vastly prefer Windows 10’s user interface. It just makes so much more sense than Windows 8 ever did. I absolutely adore the new multitasking features. (And, yeah, I’ve got loads more to test.) But is Windows 10 ready for hundreds of millions of users? I’m not sure. It’s going to take time to iron out these bugs and dead-ends.

“How likely are you to recommend Windows 10 to a friend or colleague?” the operating system asked me. I’m not sure, Microsoft. Depends on whether they’re going to call me if or when their shit stops working.

On the plus side, I totally got Photoshop and Premiere working again on my desktop computer. It was really easy once I googled the right keywords. Just follow these instructions and pick “Solution 2”.