Brazil Would Like Its Four Legged Snake Fossil Back

Remember that adorable (horrifying?) four legged snake fossil that made such a sensation last month? Well, not everyone’s tickled pink about it. Brazilian officials suspect the fossil was stolen from their country, and if it was, they’d like it back, thank you very much.

The controversial leggy snake in question, Tetrapodophis amplectus, hails from the Crato Formation in Brazil. The 100-million-year-old fossil became an international hit after scientists reported the find in the journal Science on July 24th. And how could it not have risen to fame and glory? It’s a freakin’ four legged snake!

Trouble is, the fossil wasn’t acquired in Brazil. It was borrowed from a private collection in a museum in Solnhofen, Germany, in 2012. And that detail didn’t fail to escape the notice of the Brazilian National Department of Mineral Production, which has now opened an investigation to determine whether T. amplectus was illegally carried across borders.

“We will formalise a request for investigation with the Brazilian Federal Police, in order to ascertain how this fossil specimen left Brazil,” Felipe Chaves, head of the fossil division at the NDMP, told Nature News. “We know some details that merit being investigated,” he added, rather obscurely. 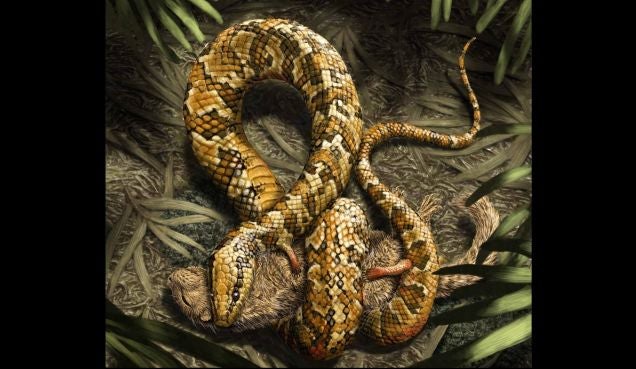 Chaves only learned about the fossil after the discovery was published, and he maintains that the scientists should have informed Brazilian authorities when they learned of its origin. Lead study author David Martill’s view? Not his problem.

“There are hundreds, if not thousands, of Brazilian fossils [in museum collections] all over the world,” Martill told Nature News. “It is a bit distracting if scientists have to mess about with the legality of fossils before they study them. I see thousands of fossils every year from all over the planet. I am not going to write to the governments of all those countries just to check each and every fossil.”

Protectionist laws on fossil trading have been on the books in Brazil since 1942. China, Mongolia and Morocco have adopted similar laws in recent years. Martill is among many (but not all) palaeontologists who believe that such laws hamper scientific research at no real benefit to anyone.

“It is my feeling that the lawyers and embassies should fight it out amongst themselves and just let the scientists get on with plying their trade,” he told Nature News. “I don’t care a jot where the specimen is… so long as it is in a safe and accessible place for future scientists to research it.”

It’s unclear how this will end up shaking out for Brazil. But it is clear that palaeontologists — however much they’d like to just put their pith helmets down and dig up bones — can’t escape politics any more than the rest of us.