How Did the Bicycle Evolve?

By Quora on at

The quest for a human-powered, stable, fast and energy-efficient vehicle has taken us a long way. Let’s see how it all started.

The first reference to a two-wheeled vehicle driven by one rider was a toy-like simple machine, with just two wheels attached to a rigid wooden frame. The rider would sit on the frame and drag using his feet, moving forward.

While it is not precisely known who invented this, Médé de Sivrac, a French craftsman, is often credited to have first come up with this design.

There were a couple of strong issues with this tool. It lacked stability, as the moment the rider lifted both of his legs, it started falling over. Along with this, there was difficulty in turning. The rider had to lift the front wheel and drag it to take a turn; many times this required stepping out, turning and then using it.

Lack of ability to quickly steer resulted in difficulty in traversing even moderately rough terrains.

Before explaining this invention, it is worthwhile to know of an important event: the volcanic eruption of Mount Tambora in Indonesia 1815. It caused a widespread crop failure leading to starvation and death of horses in huge numbers.

A German civil servant, Baron Karl von Drais, was looking for alternatives to horses for some time. He then came up with modifications to the toy machine and invented what famously became known as the hobby horse or Draisene or Velocifere. He was able to clock speed as high as 15 kilometres per hour.

The important modification here was the addition of simple joints to make the front wheel steerable. As the speed had increased, a backrest was also added for the rider comfort.

Still the ride was quite bumpy. Also, we still had feet on the ground.

The credit for inventing the first true bicycle — one which could be ridden with both feet off the ground — is given to a Scottish blacksmith Kirkpatrik Macmillan.

Macmillan attached two levers on either side of the frame near the position of legs. While one end was on the frame, the other end carried a short lever (known as a treadle) which in turn carried pedals. The rider would simply oscillate pedals and the complete mechanism would rotate the rocker fixed on the rear wheel. This was given the name Velocipede.

To understand the mechanism used see the figure below: 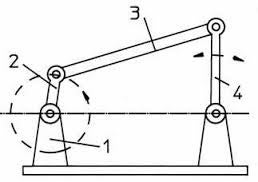 Check the velocipede image carefully. You will notice the presence of small black colour pieces in the centre, near the frame. These have threads attached and go up to the hand bars. As the speed was increasing, this was the first model to have brakes — since dragging by feet was not a good thing to do.

Although Macmillan’s Velocepede was the first true bicycle, which enabled the user to traverse without putting his feet on the ground, it failed on commercial grounds. Not a single product was sold. Probably because oscillating the feet was much more troublesome than rotating it as in the designs that came later.

For the next four decades, there wasn’t much strong development and innovation in the design. A French blacksmith, Pierre Michaux, is credited with coming up with a new design which had pedals for the first time instead of treadles. The pedal-crank system was attached to the front wheel.

Michaux’s Velocipede was similar to the present day working of children’s tricycles, though there was one more piece of innovation needed.

Despite the use of suspension, the iron-rimmed wooden wheels shook the so much user that Michaux’s Velocipede was nicknamed the “Bone Shaker”.

Some theory before we jump on the next design

The aim was to increase the speed of the bicycle.

So the distance travelled can be increased in two ways — either increase the number of revolutions per unit time or increase the diameter of the wheel. (It was difficult to do both as the weight of the wheel would increase too much.) Keep this piece of information in mind.

While driving bicycle we don’t just need longer distance, but also torque, or rotating force, which will give us the necessary traction to propel forward.

Let’s Do One Experiment

Put your bicycle on the stand and try rotating the pedals using hands. Steadily keep on increasing the speed. You will see that after a threshold RPM (Revolutions per minute), the force which you are applying starts decreasing. This happens because after a certain RPM our hands (or legs) are not able to deliver the same force at higher speed.

There occurs an optimum RPM at which the force applied is maximum. For human legs, this comes around to be around 50 RPM.

Great! Now, at that time it was not justified to rotate (or pedal) the front wheel at that high RPM since it resulted in very large shocks and made the ride highly uncomfortable.

The increased circumference of the wheel gave longer distance in one revolution. This led to the increase in speed, but some problems also came up.

1870s to 1900s was the era of these high wheelers. It was a commercial success. The high wheeler gave a normal speed of up to 20 miles per hour, which was way ahead of the previous designs. The problems that arose with the higher speed were due to its size. The centre of gravity was very high and closer to the front wheel. Powering as well as turning the front wheel led to decrease in stability. Even a small pebble or sudden brakes could make the rider fly off

An Englishman named Henry J. Lawson removed a lot of problems and came up with a new design named the Bicyclette, which soon got famously called as “Safety Bike”.

As you could see from the picture, the size of front wheel came down and instead of the direct power transmission, chains and sprockets were used. The ratio of sprocket sizes enabled higher possible RPM.

Soon a series of additional small but important changes came up. Both wheels became equal in size, pneumatic tires, bells, tangential spokes instead of radial spokes and other features emerged, making the bicycle more stable and strong.

Check out the complete evolution of the bicycle in just one minute:

About the author: Raj Arjit, Writing a history of the bicycle