Simple Soundwaves Can Knock a Drone Out of the Sky

A shotgun is obviously the more satisfying approach, but researchers at the Korea Advanced Institute of Science and Technology have found a simpler way to knock drones out of the sky: by targeting their onboard gyroscopes with nothing but sound.

Inside every drone is an electronic gyroscope that’s constantly keeping track of the craft’s orientation, tilt, and other directional movements, allowing it to automatically make subtle adjustments to keep it stable in the air. Without a gyroscope, even the most skilled drone pilot wouldn’t have a chance of keeping one airborne. So that’s what these researchers have targeted.

Have you ever run your finger around the rim of a wine glass until it started to make a sound? You’re actually causing the glass to resonate, and it turns out the same approach can be used to disable a drone mid-flight. Many electronics are designed to only resonate at high frequencies well above the range of human hearing to ensure every day sounds don’t affect their operation.

But the researchers at KAIST discovered that many drones actually use cheaper gyroscopes that will resonate when exposed to a specific sound. When a gyroscope starts to resonate and vibrate, it loses its ability to accurately keep track of its balance. So it incorrectly over-compensates while making speed adjustments to its rotors, which will quickly send a drone crashing to the ground. 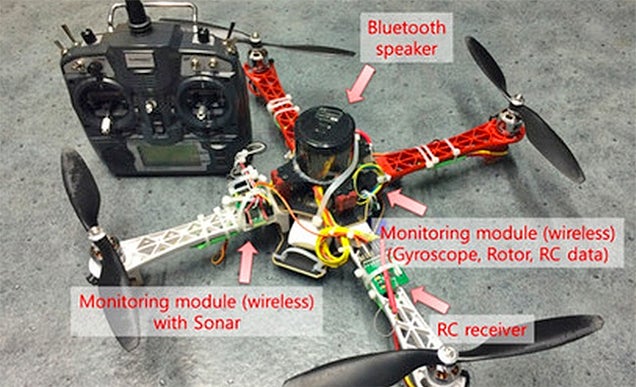 But knocking a drone out of the sky isn’t as easy as just cranking your home stereo playing a specific sound. The sound waves affecting the craft’s gyroscope need to be loud and intense to induce resonance. In their tests the researchers were able to crash a drone with a speaker attached directly to the craft’s main housing where the gyroscope was stored. But in an emergency situation where police and fire personnel are trying to clear the skies, attaching a speaker to a drone that’s hundreds of feet overhead just isn’t going to happen.

However, the researchers did speculate that it wouldn’t be impossible to knock a drone out of the sky with sound waves from afar. It would only take about 140 decibels to disable a craft that was up to 40 metres away. And the military and law enforcement already have non-lethal acoustic weapons that can accurately hit targets up to 5.5 miles away.

With the right frequency, it could easily be used to jam a drone’s gyroscope from afar, without seriously damaging the craft—though the same can’t be said for the sudden stop at the end of that long fall. [KAIST via Computerworld]