Created by London designers Matteo Fogale and Laetitia de Allegri as part of London Design Festival 2015, the installation takes inspiration from the exhibitions around it. The pair explains to Dezeen:

“We looked at the Renaissance room downstairs and the glass room next door, and these were our starting points. We found out that during the Renaissance, perspective line drawing was created.

“Stained glass was used a lot during the Renaissance. We used acrylic as an alternative to glass because it has the same characteristics and beautiful colours.”

In fact those panels — largely transparent but also slightly reflective — have irregular openings cut out, each of which is slightly smaller than the last. The tinting also varies, gradually becoming darker, adding to and emphasising the sense of perspective. It’s like a sci-fi version of something from Alice in Wonderland. [Dezeen] 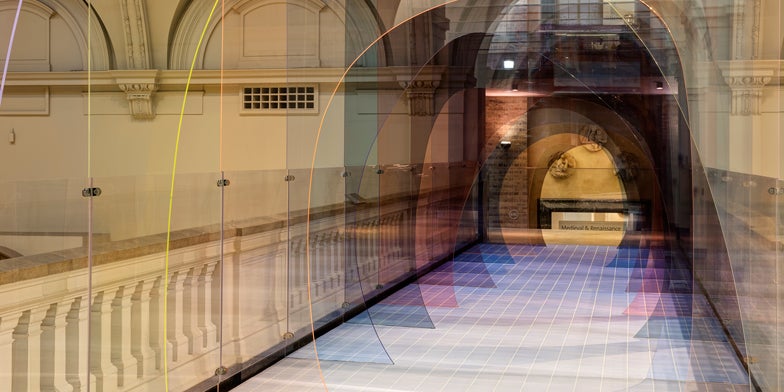 Images by by Ed Reeve/V&A