Most nectar-eating bats hover in front of flowers and lap like crazy to shovel high-calorie goodness down their throats. But when some species of South American leaf-nosed bats cozy up to a flower, they just stick their tongues in and leave them there. They’re eating, but their tongues don’t seem to be moving at all. It’s weird. 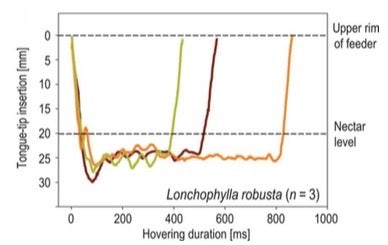 To figure out what was going on, Marco Tschapka and colleagues from the University of Ulm in Germany used high-speed video to film three Costa Rican Orange Nectar Bats (Lonchophylla robusta) as they ate from clear artificial flowers. They found that as each bat ate, the tip of its tongue stayed still, but tiny contractions of its muscles pulled nectar into deep grooves on the sides of the tongue and lifted it toward the bat’s mouth.

The grooves are open to the air along one edge, so these bats probably aren’t sucking through them like straws. The team thinks that they may instead let the nectar stick to the wall of the grooves as the tongue muscles pump, creating a tiny fluid-moving conveyor belt inside the channels. The unique anatomy and function suggests that these bats may have evolved the trick of eating nectar independently from their rapidly-lapping cousins.